Whitney and Michael had to head back home to Halifax this day, but apparently we had not yet had enough of cruising the Bay of Fundy in a boat. This time we took the car with us. 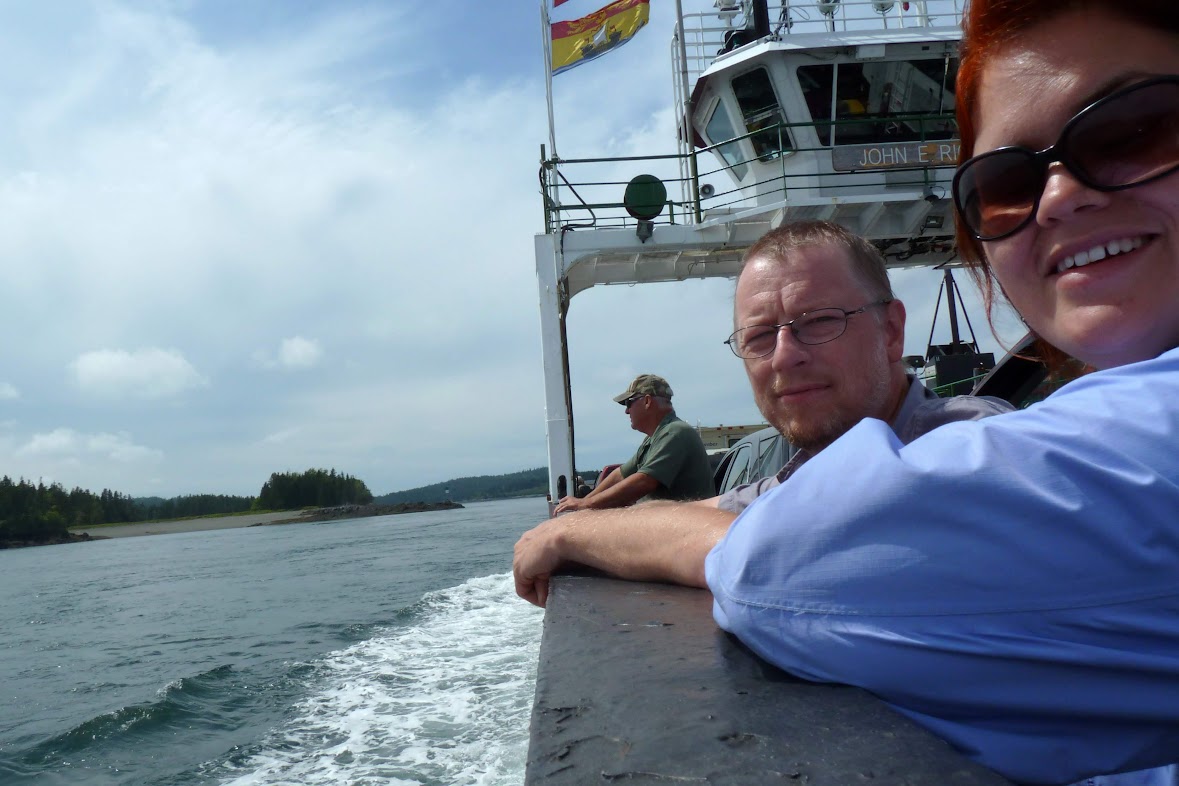 The ferry to Deer Island runs frequently, and just happens run from virtually around the corner from our Green's Point lighthouse. Deer Island seems to be, to some extent, New Brunswick's smaller version of Nova Scotia's majestic Cape Breton Island. It also is ringed by a (sometimes) scenic coastal highway, which is dotted with occasional artist studios/shops.

Probably the most memorable stop on this island for us was probably The Happy Shoppe. 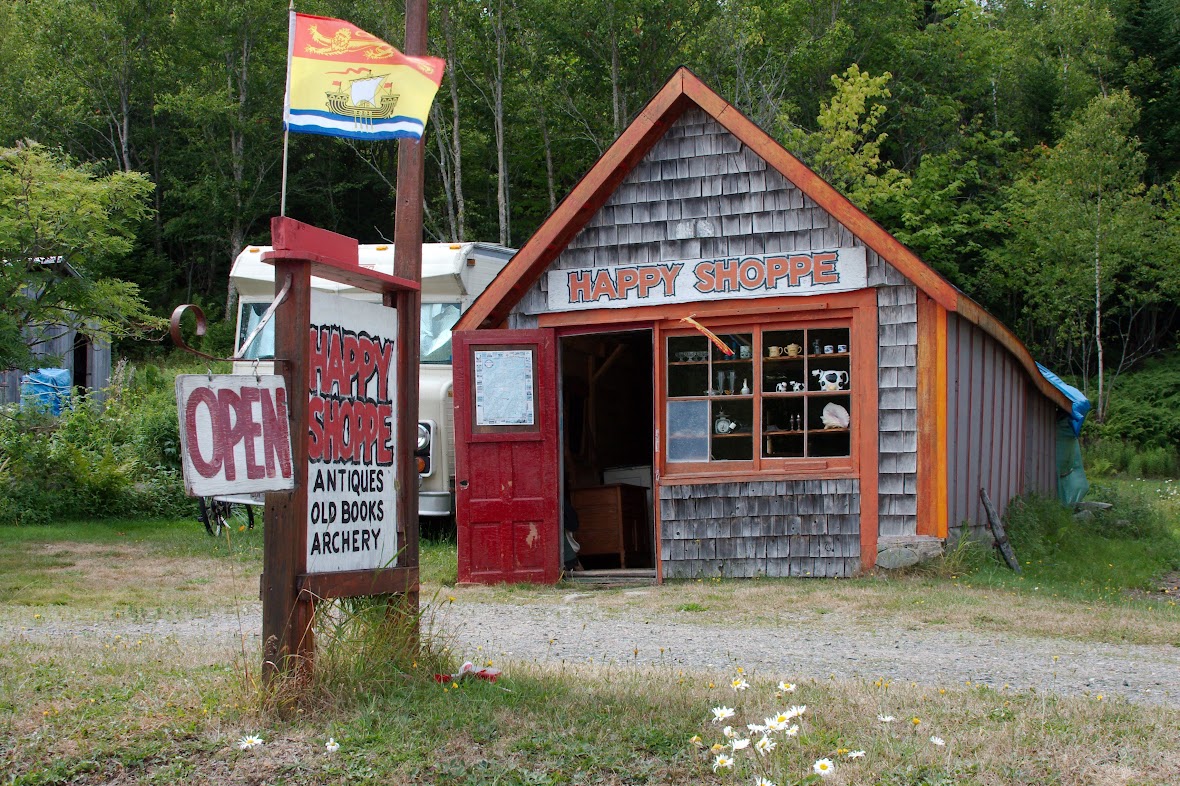 True to its sign, there were indeed antiques, some old books, and.... archery! While the others went in to check out the "shoppe" (of which the shed in the picture above is only part, it also extends to the house a bit up the hill to the left), I took the dog for a stretch/walk down the road. When I came back, I found the family out behind the above shed... on the archery range. 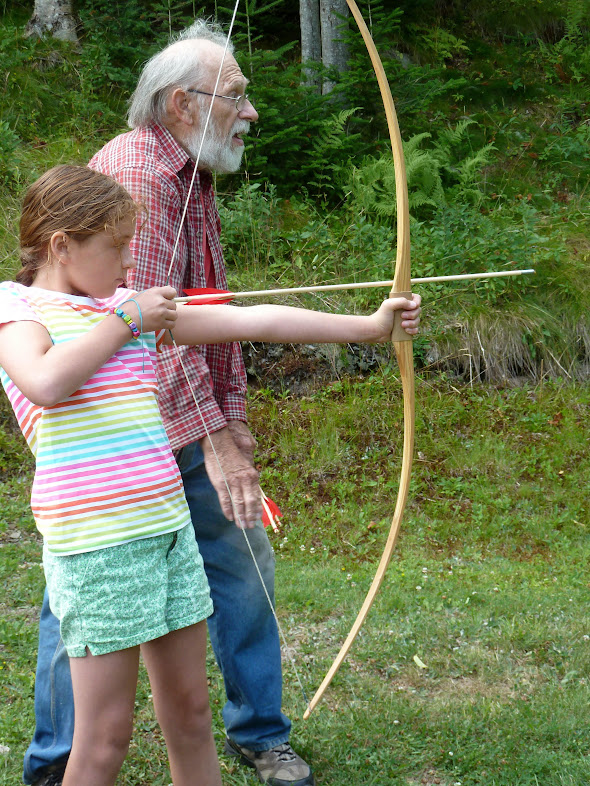 So it turns out the proprietor is a retired University of Guelph administrator (if I recall correctly), who opened up his antique shop as a sort of hobby. And also he hand crafts wooden long bows. He was kind enough to take everyone around back and give them some archery lessons and practice on one of his bows. 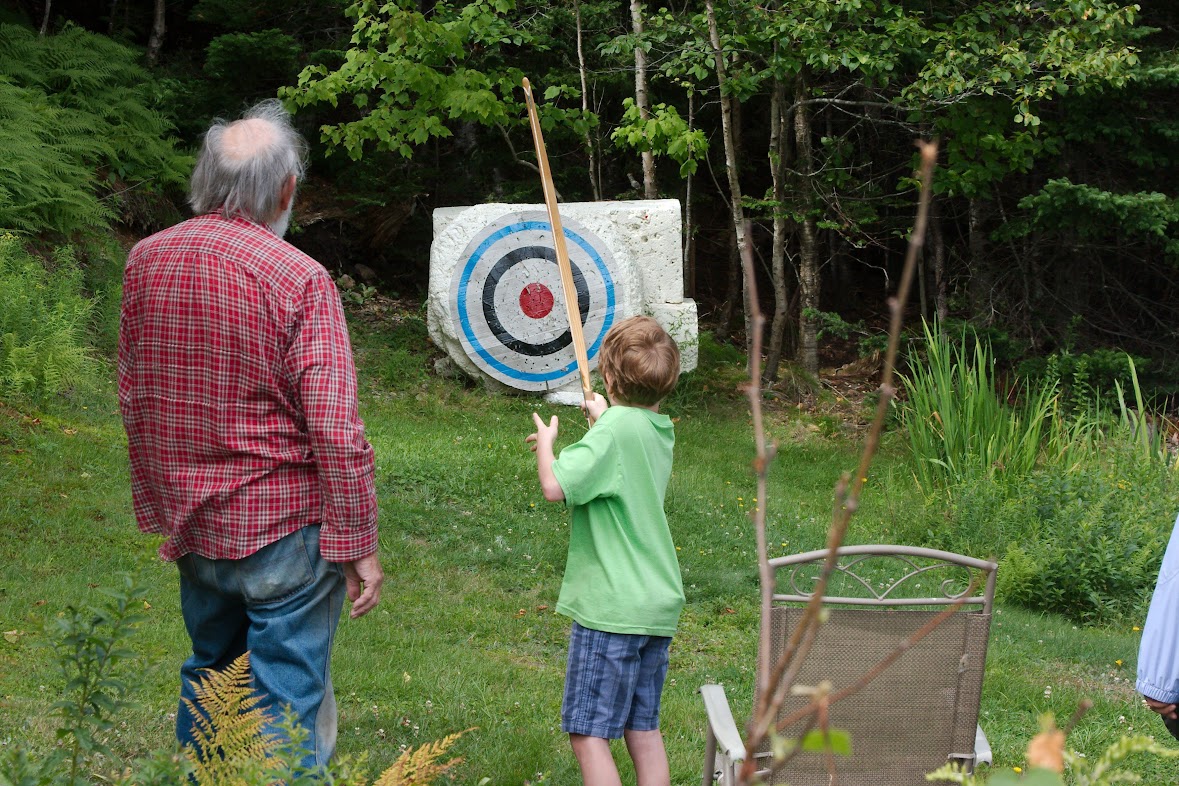 The old archer also tipped us off as to where a hiking trail was nearby, which we'd wanted to find. Even with his helpful hints we missed it, and had to double back to finally find it.

The trails weren't terribly long, but it was fairly rugged with several varying terrain types. At one point there is a cabin-like building with a balcony look-out towards the ocean. 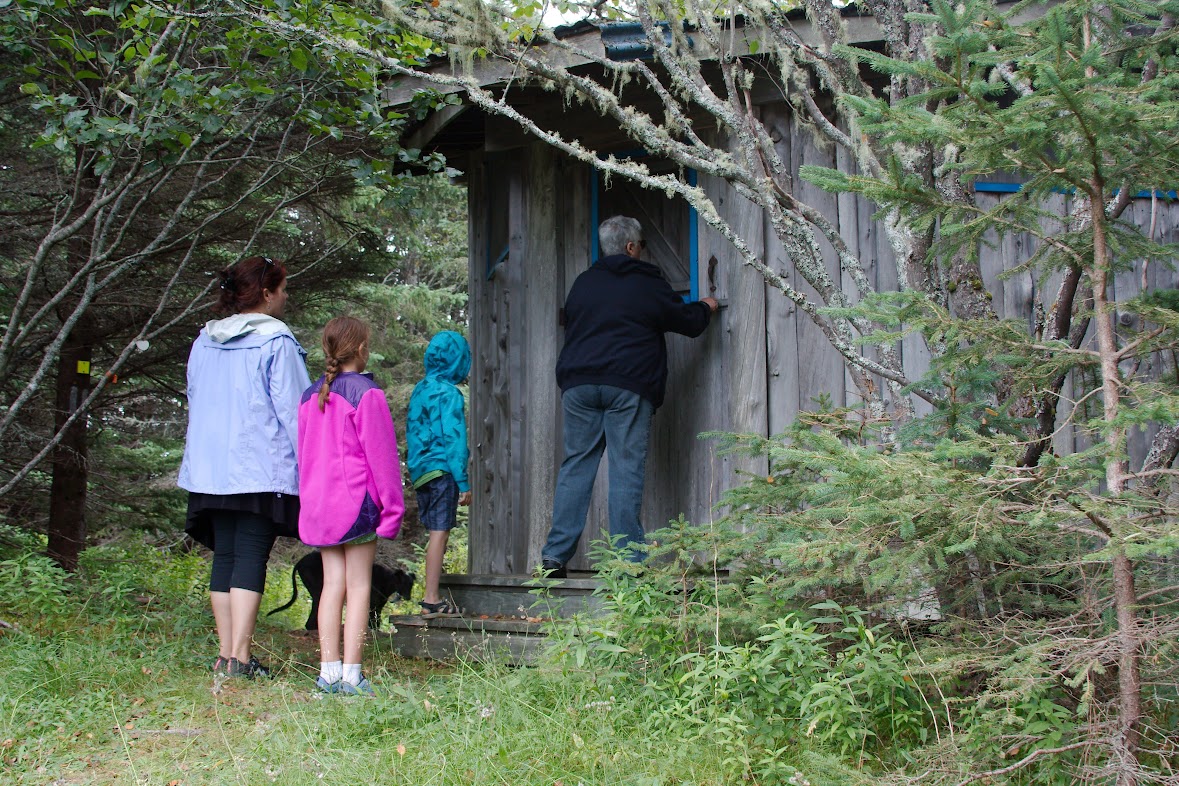 Em left his mark. We'll say no more about that. Have a picture of an interesting old stump, instead. At the very south end of Deer Island, you can catch another ferry which takes you to Cambobello Island. Campobello Island, oddly, which only can be reached from New Brunswick via the two ferries, actually is attached to Main, USA, via a bridge on its south-western side. Anyhow, the Campobello ferry was not running for some reason while we were on Deer Island, so we didn't have to decide whether to check it out or not.

Instead, we just drove to the very southern point of Deer Island and pointed across the channel to where the kids might look and possibly see some real live Americans. We didn't see any though. Maybe they don't come out in the rain? (It was raining a slight bit, at that point.) 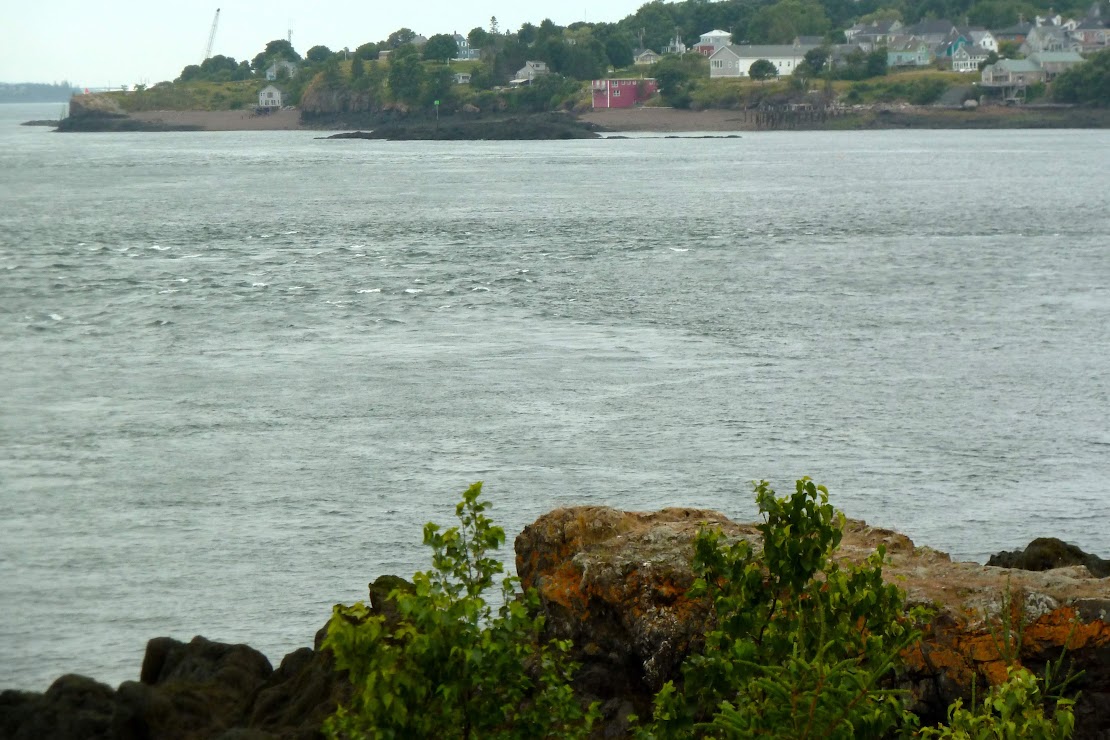 There is actually supposedly a whirlpool out there separating us. In fact the largest whirlpool in the Western Hemisphere. Old Sow Whirlpool, it is called. Maybe the tide has to be right, or maybe you need to get closer in a boat, but we couldn't see much where and when we were.

Anyhow, despite a bit of drizzle, it was another nice day wandering around the east coast.

The rest of the pictures are here. 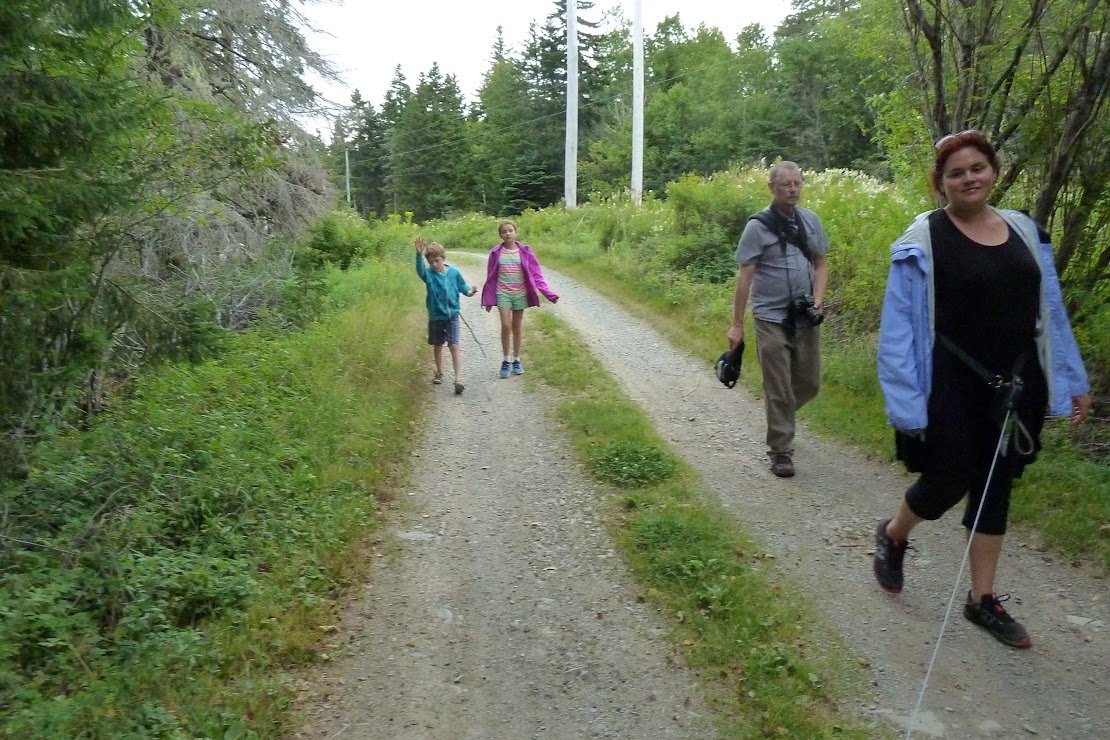