The next morning we rendezvoused back in St. Andrews, with whales in mind. And for the occasion Istra made for herself a new hairstyle... 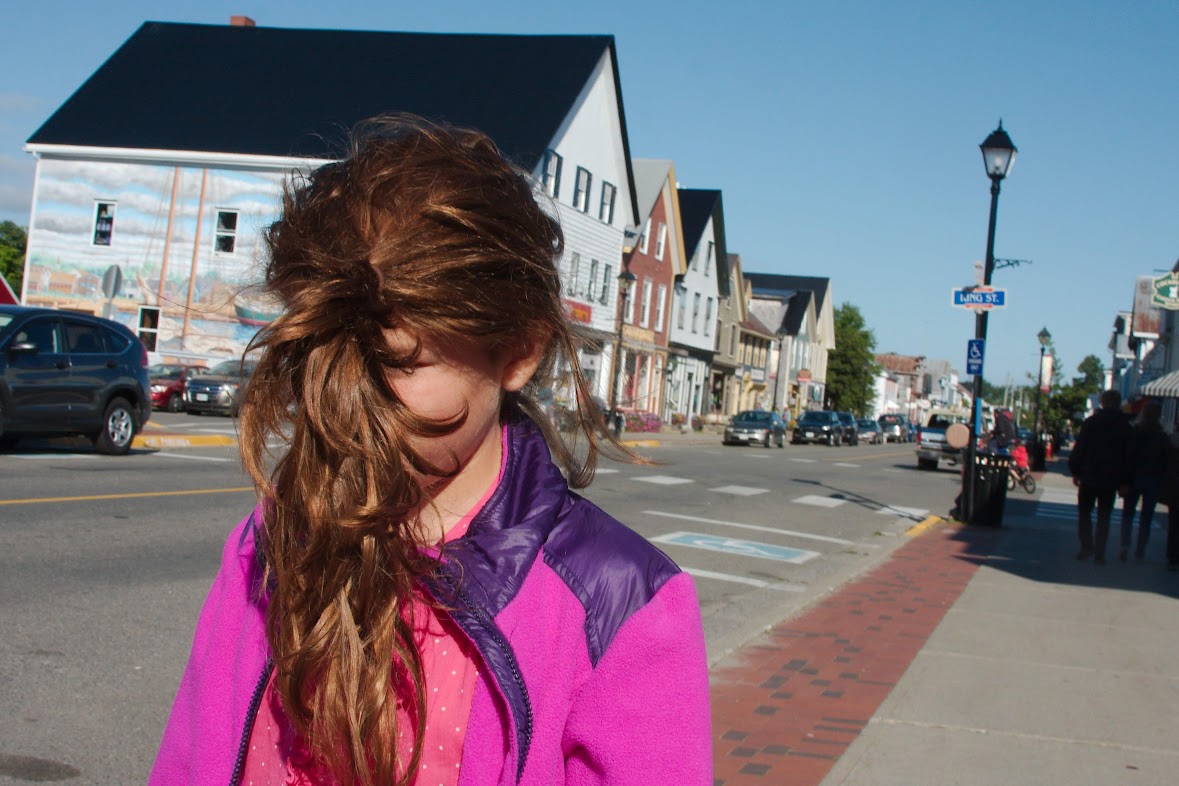 Sadly the hairstyle proved not entirely practical; so mommy fixed it for her. We saw a random cat, and a motorcycle (which the cat may or may not have ridden in on). And then we headed out on a big boat to see... some rocks. 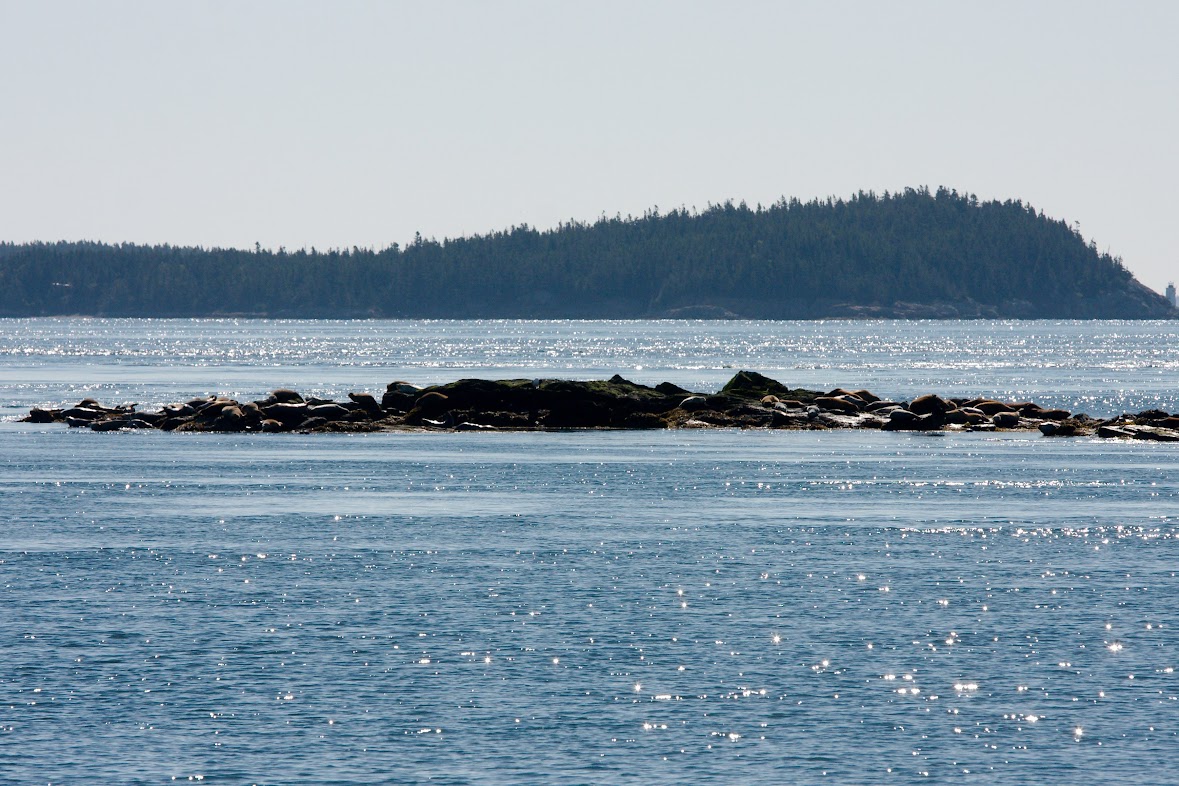 It was a bit weird how the boat slowed down here. These rocks didn't even look very interesting. There were much more dramatic rocks elsewhere. But, wait a minute... there does seem to be something funny about these...

Those are not rocks!!! 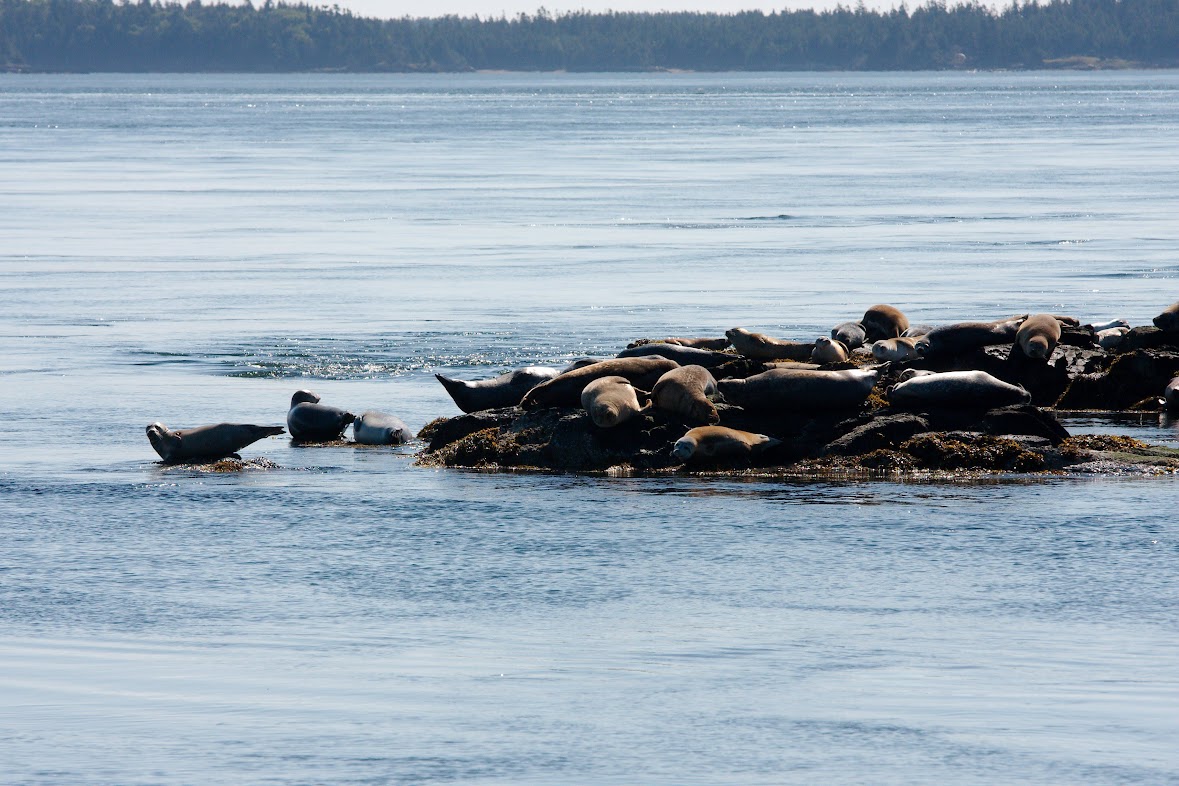 Well, they were rocks... but rocks completely covered in seals! Our guide told us habour seals were the smaller seals with the doggy faces (all of the ones up on the rocks). The larger seals with the horsey faces (a few of which we could see swimming around) were grey seals. 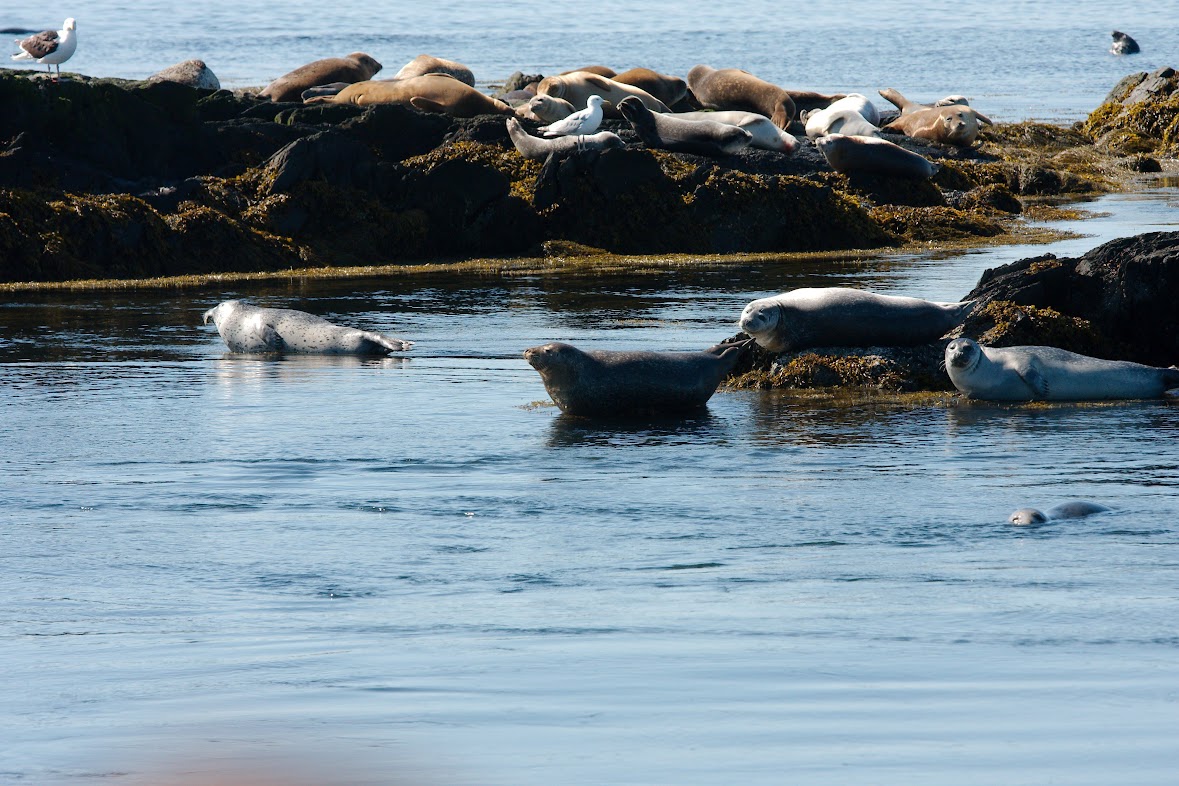 It was recommended to bring warm clothes for the boat trip. This advice seemed a bit crazy, because the weather was sunny and very hot. But once the boat got moving, the cold ocean air felt very chilly indeed for those of us who refused to leave the deck for shelter below. 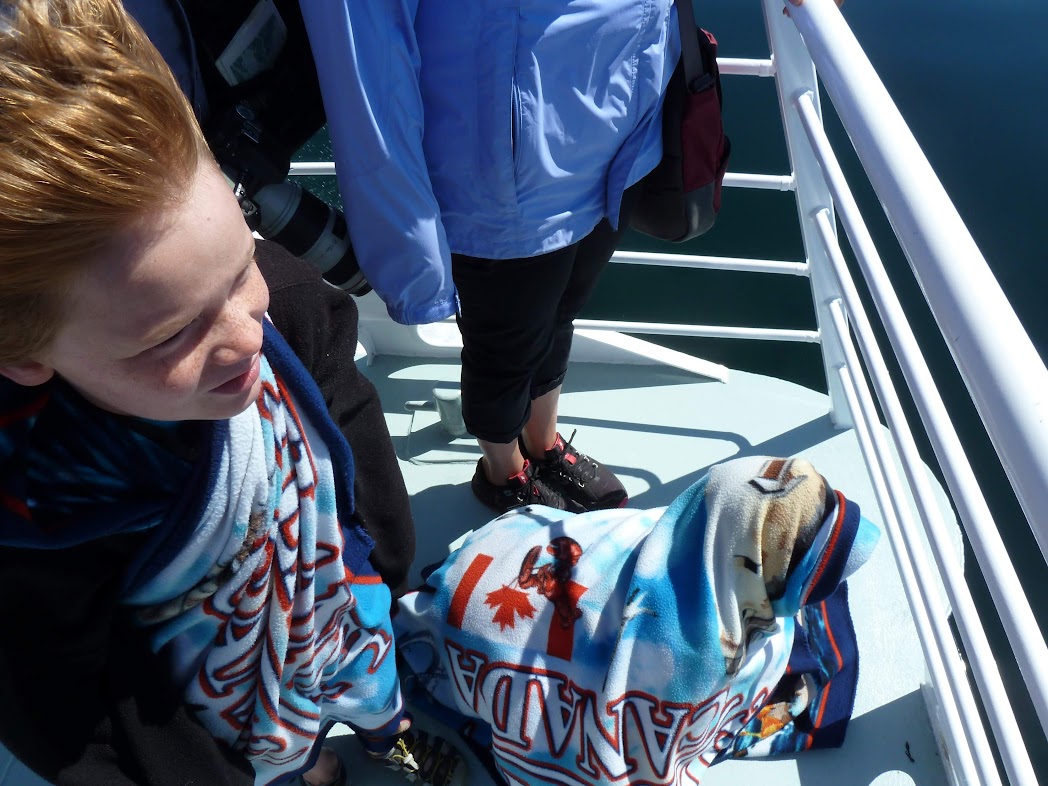 I surrendered my jacket to Emeth, who wore it was like a long robe -- but still being cold he sat on the deck to tuck his legs in. Eventually the kids went and got blankets which the boat supplied for frozen people. Emeth still kept my jacket, but wrapped the blanket, toga-style, to cover his legs. Istra... well, you can see Istra's Arctic survival tactics with her blanket in the picture above.

After the seals, our attention was drawn by a curious fin sticking out of the water in the distance. It seemed fairly large, and just casually drifting through the water. It definitely wasn't a porpoise, many of which we had seen already bobbing up and down. The boat turned to approach the fin... 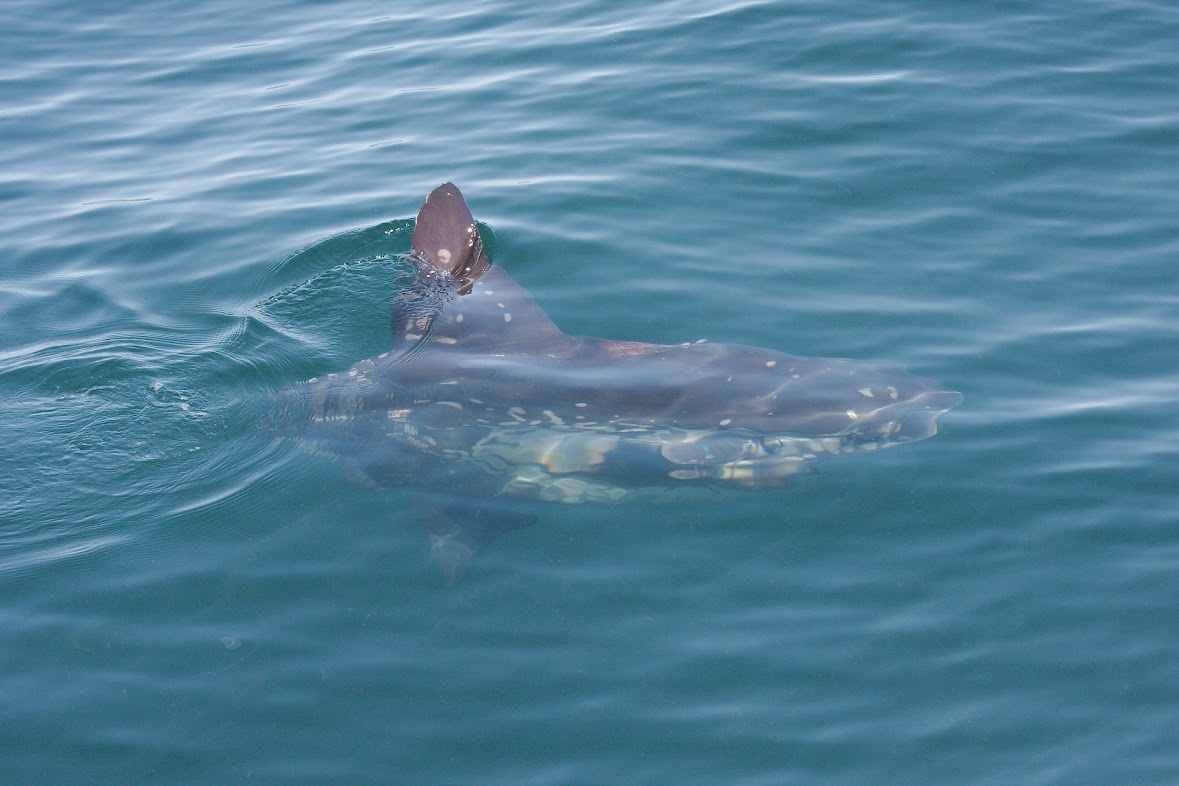 The mysterious creature we were lucky to see turned out to be an ocean sunfish, or mola mola. The boat got quite close, and the guide extended a waterproof camera on a telescopic pole to get better video of the thing. They are quite large. They have a very odd and awkward appearing way of swimming, with their large dorsal fin frequently sticking up out of the water, and another equally large anal fin pointing down. They do not have tail fins. Their main diet is jellyfish, so I guess they don't need to be super awesome swimmers to get their dinners.

We were super lucky to see the mola, but even more luck for us was soon to surface... 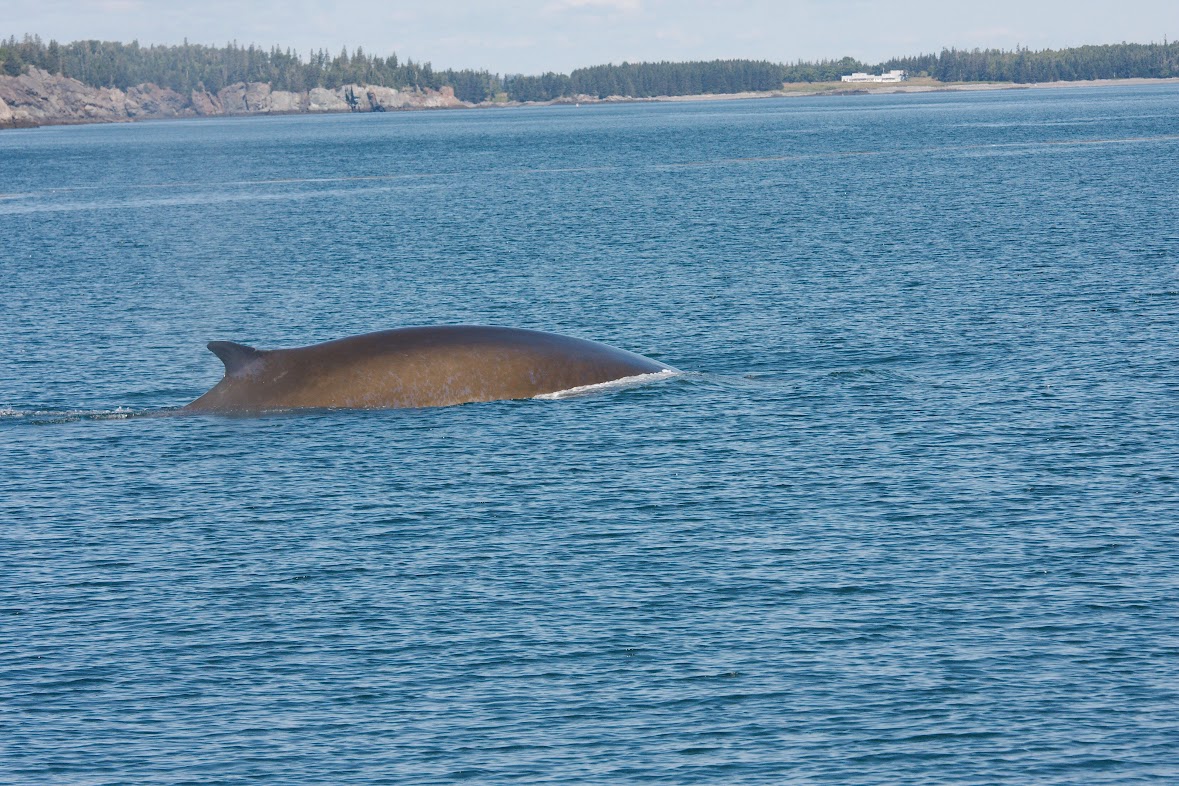 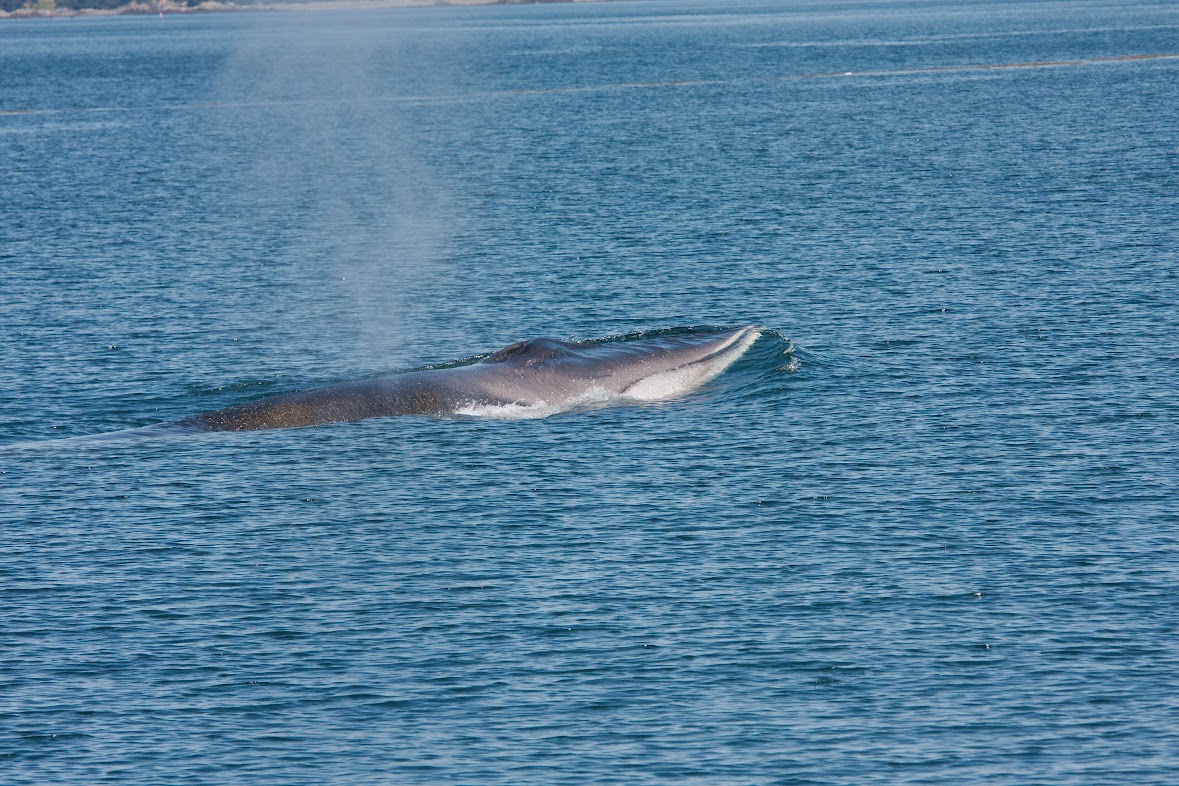 We followed this whale around for quite a while, until we had to turn back to the dock. But on the way back to the dock a minke whale was spotted and we were lucky again to see it, though not as closely as the finback. The whale watching company's sightings log for the day says they were unable to find the fin whale again when they went out in the afternoon, so we were lucky we took the first morning trip.

We also passed an island with many nesting sea birds, including an adult and juvenile bald eagle. But mostly it was awash in gulls nesting in geometric rock faces. The original apartment dwellers. Another bonus treat we had on this cruise in the Bay of Fundy was that the boat passed by Green's Point, the very point the lighthouse cottage we were staying in is on, and so we got to see what it looked like from the ocean perspective.

On the way back to the pier, the whale watching guides pulled out a tank of live sea creatures, to describe and let people touch starfish, urchins, and snails. 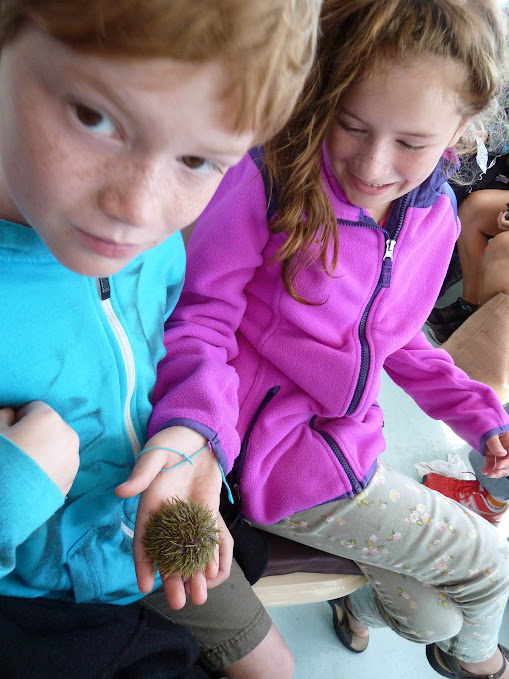 When we got back to our lighthouse cottage, we went for another walk to look at our low-tide sea shore. 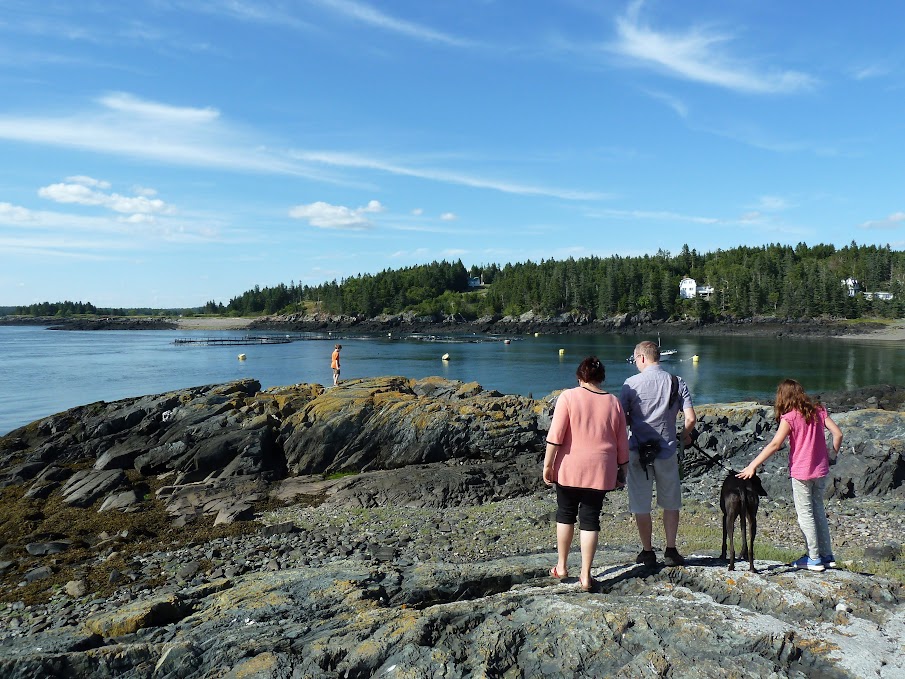 There were, to our eyes, amazing and unusual rocks everywhere. Istra found a few she just could not leave behind. Em, on the other hand, appears to have grown attached to a scrap board. 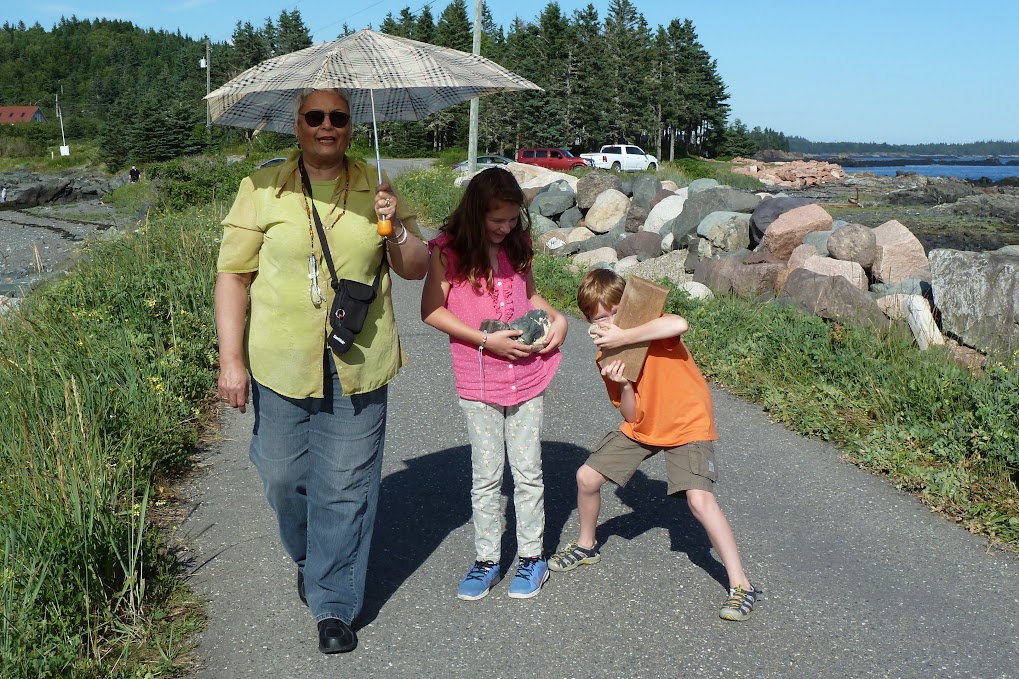