The Conquest of Montréal (and Flight Therefrom)

So we have been in Montreal. And apparently we don't have all that much to say about it? Selena was sequestered nearly all the time on the 12th floor of one of Concordia University's several downtown buildings, where the anthropology & sociology department conference was being conducted. We had originally thought to take advantage of the opportunity of the conference to have a bit of time ourselves to enjoy in Montreal, but it didn't end up working out that way. We had to get up very early and race to Montreal the very morning the conference started, and then, as things turned out, we would have to race back home immediately as soon as the conference ended — collecting the kids from Gramma's (and grabbing a shortened night's sleep) on the way. 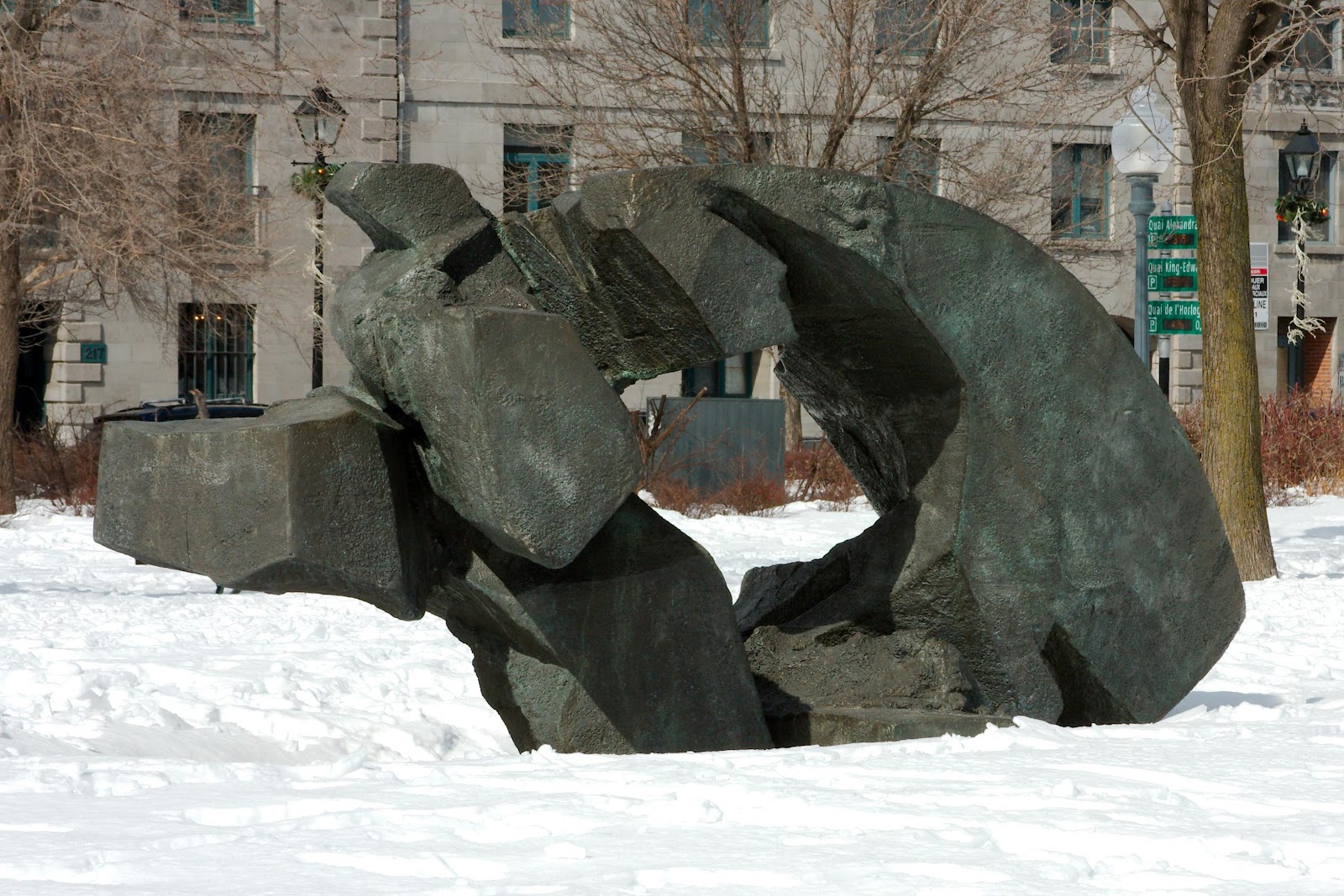 We decided to take the car to increase our mobile flexibility for the bit of time we'd have for ourselves in Québec — but the way things turned out, the car's main effect was in causing much stress in trying to find cheap/free parking, and then worrying about it, and having to move the thing too frequently. Though it did allow us to at least make a few stops on our way out of the city. 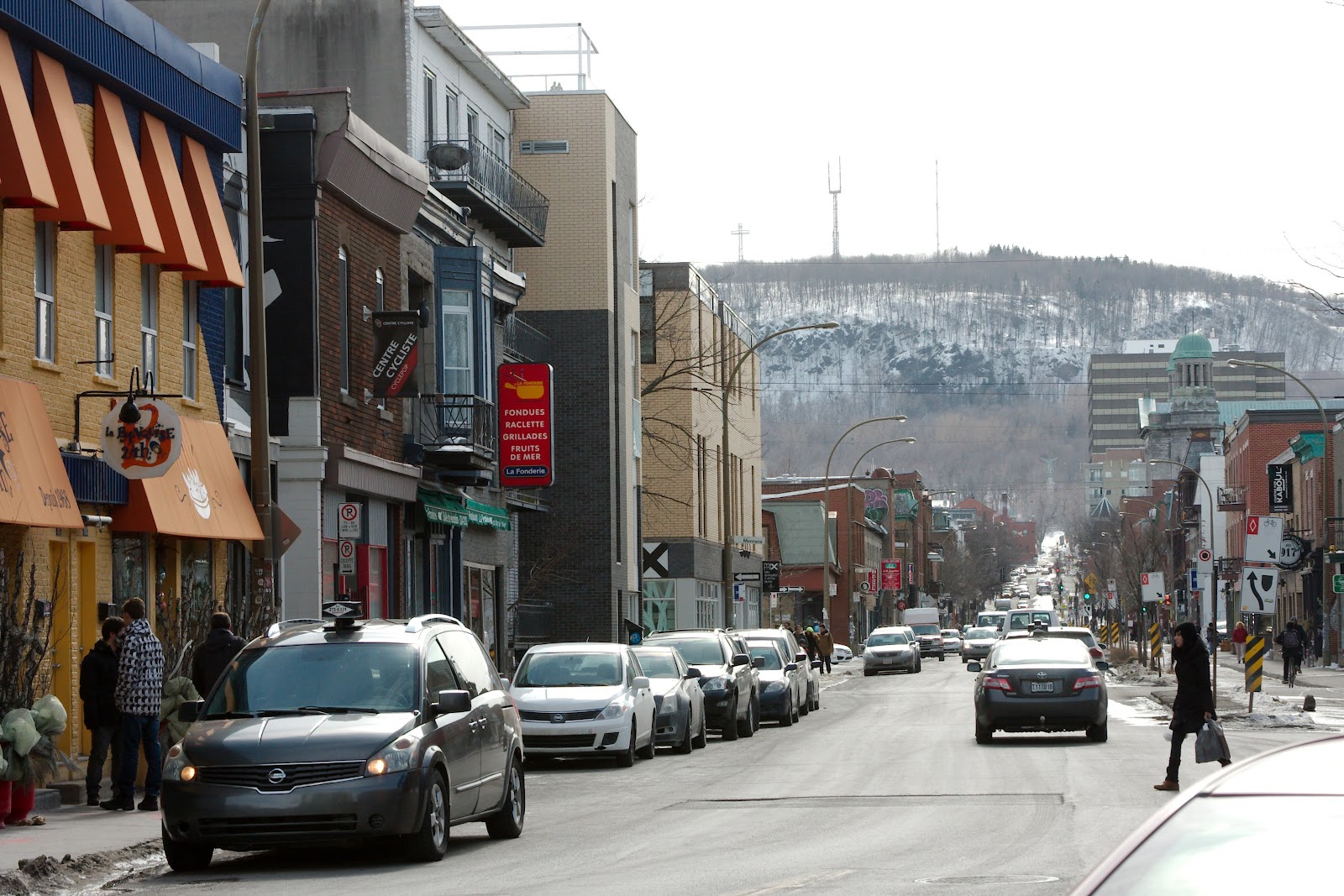 Specifically, we made a holy pilgrimage to La Banquise — a 24 hour diner that specializes in what is reputed by many to be the best poutine in the city. We had to settle for take-out. Because there is utterly no parking anywhere (it was hard enough even just trying to find a place to stop)! And also, anyhow, we had to run. But where we ran, in this case, was up Mount Royal (which you can see in the background in the picture above, with La Banquise being the yellow/orange building to the left). We pulled the car off at a lookout point, with a broad view of the city to the north, and while being rendered practially delirious from the dense atmosphere of freshly baked Montréal bagels covered in toasted seseme seeds all around us in the car, we partook of the amazing gooey goodness (though a bit soggy from being in a closed container) of the real Québec poutine.

Why the insanely fresh-baked bagel environment? Because after grabbing the poutine take-out, and filling the car with that mouth-wateringly maddening aroma, we swung by St-Viateur Bagel Café to pick up some fresh Montréal bagels to thank our dog-sitting friends with, back in Hamilton. And, wow, those bagels with loads of wood-fire toasted sesame seeds are not messing around! They will pwn you, and everything within at least a car-interior radius.

With these things in mind, it seems hardly significant to mention that all of this was happening during a surprising near-blizzard that enveloped the city; and that it was not at all certain the car was not going to slide right off the side of Mount Royal when we attempted to climb and stop there, slush and ice by now covering everything. The other cars crazy enough to have been there certainly can not have been said to been safe from us, nor us from them. On the mountain especially, friction had largely become a fiction. Mere trifling details. We were on our way out of the city after days in which we hadn't had time to do much together, so we had to do this!

(Let us take a moment to thankfully appreciate the wonder of emergency breaks.) 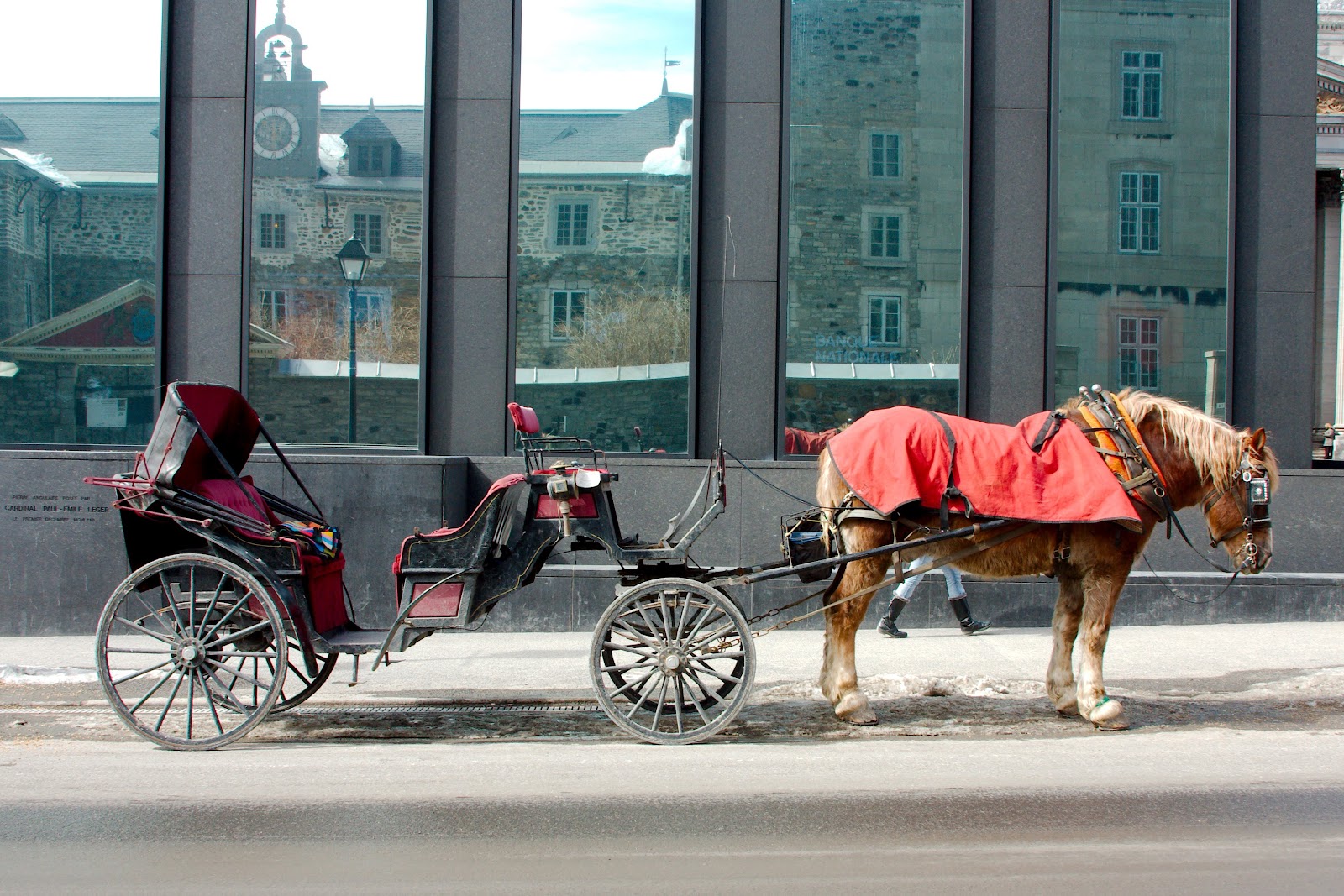 Other than the drama of leaving, the weather was quite nice (sunny), even if chilly. Besides my main job as auto valet, I did manage one day to overdo (my knees insist) a walking tour of the city on my own. My GPS tells me I traversed around 17 km (I was surprised later to discover). All that and I hadn't even brought any water with me, and barely paused to unwrap a protein bar I had in my pocket, as I wandered through La Fontaine Park, knowing I was heading towards (and inevitably up) Mount Royal. 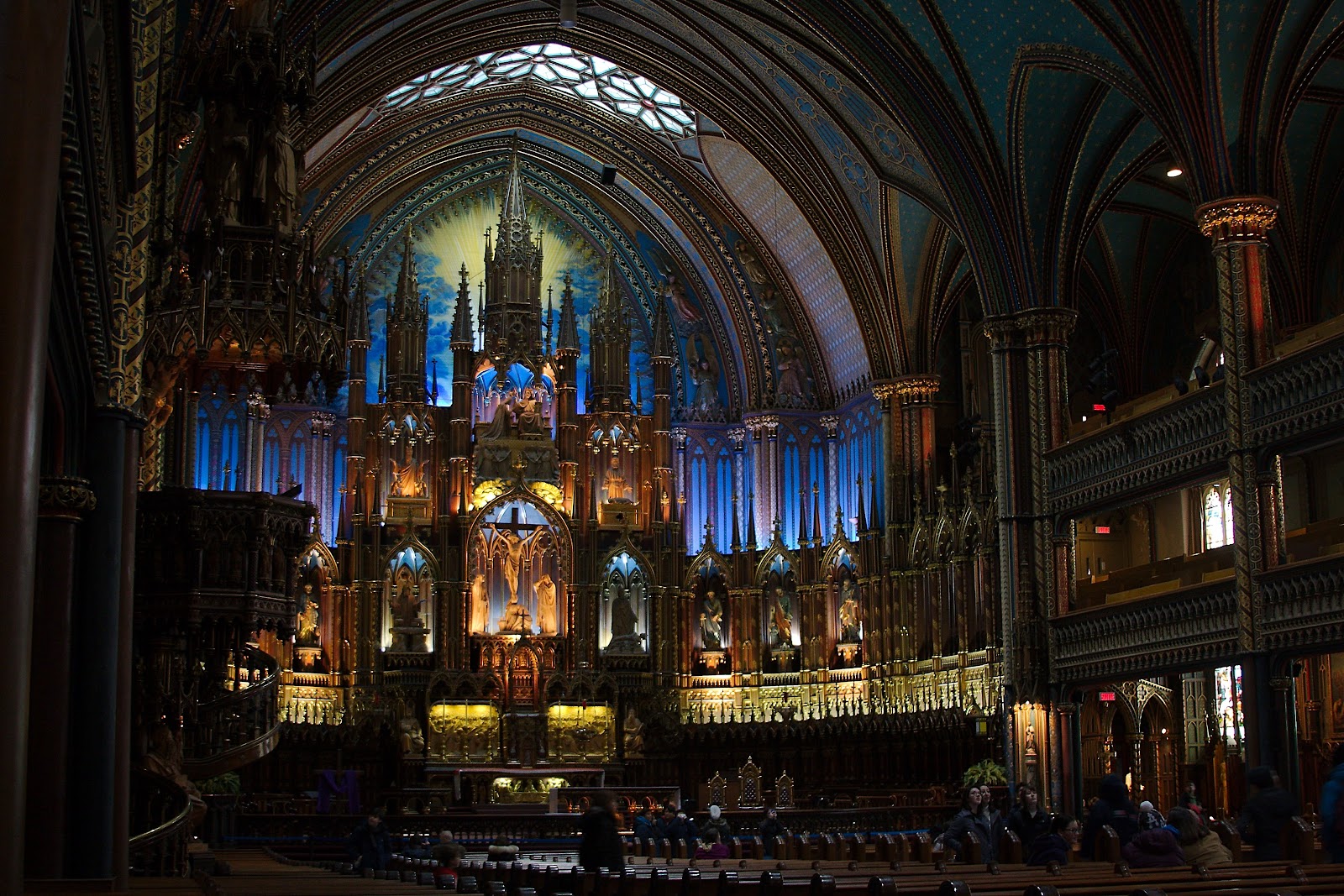 Pretty much the only real pause in my walk, if one can even call it that, was the hour I spent shuffling around inside Notre Dame Basilica, observing the stained glass panels and all the ornate filigree. It is a remarkable space. It is in fact the space of it which I was thinking makes it so remarkable. Whatever one thinks of religion, or Catholicism in particular, what an amazing thing that people have thought something so important to construct this vast hollow space to honour it. Oh, an yes, they have covered the walls with innumerable bits of art, carved wood, coloured glass, decorated pillars — but this is literally (as well as figuratively) window dressing. It is the space that makes it awe inspiring, the beautiful vaulted ceiling so amazingly high above, and the lovely walls so perceptibly far away.

What other cultural artefacts do we have that compare? Some particular art galleries and museums (at least in Europe) come close perhaps. But they are also filled up with things. This space is gloriously mostly empty, which gives one room to fill it up with their own thoughts and feelings and communion with Everything.

And then, besides the obvious main attraction of the vast cathedral, I discovered there is an even more fantastic (artistically) chapel in the back... 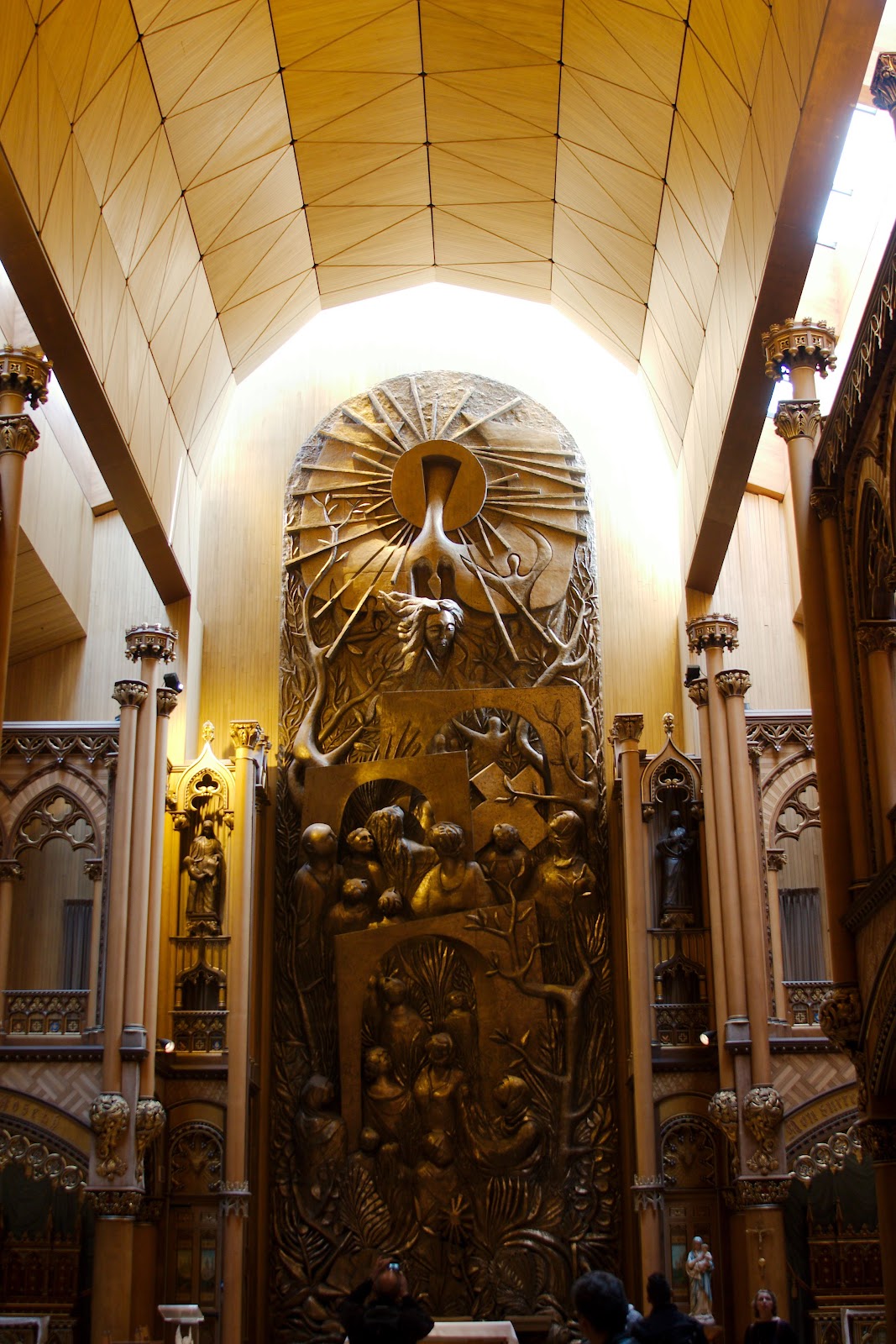 Here is a map (with some pictures attached) of my walking route. Here are all the pictures from our trip. (Seeming mostly of street/public sculptures I passed.)

The conference went well for Selena. She found it interesting to be exposed to non-literature research, and see how it fit with her own academic endevours. Her (heavily abridged) paper, which was the last presentation of the conference, turned out to be thematically an excellent wrap-up of the whole thing. It talked about the role of science fiction literature in exploring and extrapolating current bio-political, sociological, and environmental themes. It opened their eyes!