Wilderness Channel, with kids... and barrel.

We somehow managed to go on two canoe/kayak trips this weekend. The first one was shorter, the second one was epic. If not entirely epic, at least it was long... nearly 5 hours (including a stop for a snack and explore). And the kids put in a good effort (without even complaining!) too.


Selena and I, and the kids, went in the canoe, towing the kids' kayaks behind us ("in case they wanted them later"). Gramma, of course, was in her little red kayak. When we got to around to where the first (north-most) marker is on the map above, a nice calm channel that we call "the wilderness channel", the kids launched out on their own. They paddled themselves through the channel, and around the big island to around where the south-most markers are. At that point they hitched up to an adult craft for towing; Istra behind Gramma, and Emeth behind us. But even then, especially Istra, helped a lot with the paddling the rest of the way home. 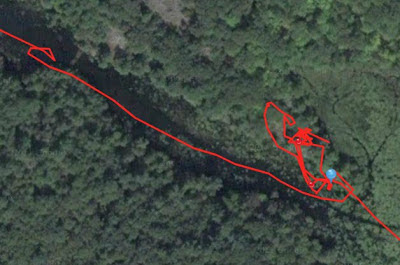 Here is a close-up of the trail just before the north-most marker on the full map. The large squiggle is where we got out on a little peninsula, and had a snack and a little wander around.

When you zoom in on the satellite view, you can not really see the water in this channel: it looks mostly like land. It is in fact marsh. All the lillypads, and greenery beneath the water, make it look solid from the sky. (For example, the picture below is looking north-east from the marker in the close-up trail.)

The small loop, to the left in the close-up picture, is us backing up to take a run at a beaver dam, to get over it! The old beaver dam there is mostly submerged, with sticks just breaking the surface intermittently. There are slightly lower parts it is possible to push yourself past. But with me and Selena, and the kids, and towing kayaks, it took a bit more effort... ramming speed! The old canoe did not break up. We survived!

Well on our way back, when we got to the peninsula near the relatively small island, sort of near the  middle of the map above, we came across a big barrel floating around. We'd seen it the day before, in a different location. It's the type of barrel people use for floating docks. Since it seemed abandoned (not to mention potentially dangerous), I got the idea of towing it back to our cottage and see if we could use it to help any of our dilapidated docks somehow. We managed to attach it to a rope, but the thing had a significant amount of water in it... it was heavy. It slowed us down a lot, and it made paddling much more... epic!

We could not now at all keep up with Istra and Gramma, despite their going slow for us, so eventually they abandoned us to our fate and zoomed ahead. When we finally rounded the last peninsula, and the cottage was in sight, even Emeth opted to be released and paddle himself the rest of the way ... and easily beat us back to the dock.

(Selena complained that forcing her to pull this thing amounted to some sort of spousal abuse; but today she says she's enjoying the feeling of the exercised muscles in her back and shoulders.)

Click on Istra to see all the pictures... (looks like to get a slide show you now have to then click the down arrow to the right, and select "slide show" on Google---why oh why do they keep hiding this critical function?!)
Posted by T at 10:30