Castles and bishops and knights, oh my!

So... I had not expected to be doing this for some years to come yet... 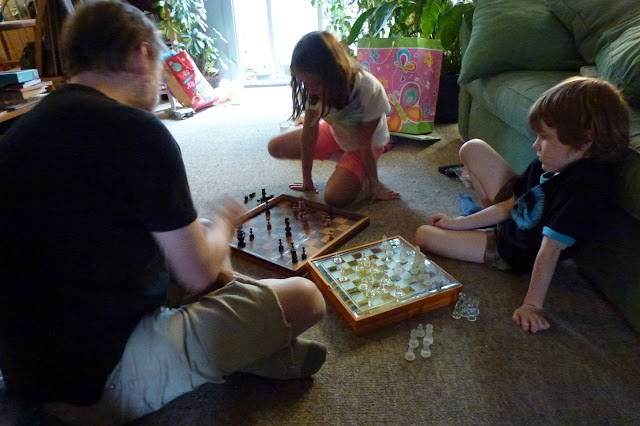 As I think I mentioned elsewhere, Istra basically (shockingly) taught herself (with some initial help from mommy) to play chess using the simple chess program bundled on her e-reader. She's often asking me to play her, but it's very awkward on the e-reader for two player (and the thing locks up annoying frequently). So I retrieved my old chess board (which I made in grade 8 shop class) out of storage, but I couldn't find my chess pieces anywhere. So that didn't help much.

Last weekend, when we were cleaning out Aunty Belle's basement, I came across an old can that was, to my surprise, filled with an odd collection of old chess pieces. There were almost two full sets in there, along with a few odd spare pieces, after I sorted them out. There were a few plastic pieces missing from one set; but the little wooden set was all there. One bishop had its top snapped off, but it looked glue-able. So when I got home we had a working non-virtual chessboard and pieces at last!

Istra was immediately begging to play. Emeth, not wanting to be left out, suddenly was clamouring for his turn. He wanted to learn chess now too.

A few days ago we found ourselves in Value Village (second-hand store), and came across a sweet looking little glass chess set there for cheap. I suggested we should get it to take up north, so we don't have to cart around my bigger wooden board, now that we're all apparently into chess. It wasn't until a bit later that I realised what I'd gotten myself into by having two chess sets available...

See the picture above.

And now we need two more chess sets for the north?!