Selena tells it like it was a walk in the park. But the reality is a tale of some confusion, and anxiety on the part of various parties.

The complications started a month ago, though we didn't notice it.

We only noticed when I went on-line to double check a credit card bill that came in the mail, which I was pretty sure I'd already scheduled a payment for. I wanted to make sure the payment went through.

Accessing my bank the first thing I noticed was the curious red line in the recent activity statement. What's that? Negative 52? Negative 52?!! The account balance read $-52 momentarily, then the next line brought the balance back up? What happened?

Good grief. The credit card bill had been scheduled for a few days before, and had triggered on the proper day. But it turns out we didn't have enough money in that bank account.

Somewhat sadly (but probably irrelevantly, as Selena later pointed out) I thought back to what day it was: it was the day we went to get the ultrasound done (a day of some anxiety and confusion of its own; but that's another story!). We had stopped by a bank machine on the way and taken out some cash to buy subway tokens. If we hadn't done that we would have had enough cash in the bank.

Mastercard had tried to take the money; TD had seen the balance go negative, and had yanked the money back... telling Master Card there was non-sufficient funds. Great.

This has never happened before, our balance being negative. I could hardly believe it. How could it have happened? I had just a few weeks before projected our budget up to the new year. It was tight... but sufficient.

I reflected that it was just lucky we were moving and so didn't have to pay rent this month (it was covered by our first and last month's payment when we first took the apartment), otherwise we wouldn't have had enough money in the bank even for rent. It would have been rent day in the next day or so.

There had to be some mistake. I started looking back through transactions in the account.

Soon I saw another anomaly. Another case of a large sum of money going into the balance and immediately being taken back off. What was that? I looked more carefully. You may guess... my last paycheck! A little note beside the item reported "NO SIGNATURE". So the bank had not accepted the deposit of my previous pay check. Ouch. So that's why the account was so low.

The reason given baffled us. We were both quite sure that I'd signed the cheque. We'd have to wait until the cheque was returned. But shouldn't it have been already? Keep in mind the rejected check was from (if memory now serves) over a week, surely almost two weeks, previous.

It was a few days later we went to look at the apartments where we are now potentially going to move. Though we still had this cash problem, we more or less decided we wanted to take one of the apartments we had seen, and so wanted to do it as soon as possible before someone else took it.

Now, while the bank account is skirting along with not much surplus, we do put money away each month in a money market account: this is intended primarily to make sure we have enough for Selena's tuition and school expenses (and also to cover taxes). We were going to need to get some money from that fund for the upcoming semester at York, so we figured we would just take out what we needed to cover the rent and moving expenses at the same time. We would still need to sort out the bank and credit card mess, but we couldn't wait for that.

Selena arranged for this. It would take 3 days for the transfer to be processed.

A few days later Selena, who had already done all the paperwork, decided to phone the rental office of the building we were wanting, to see if the apartment was still available. It was, and she asked them to hold it and she'd come the next day with the money and application filled in, and all of the extra documentation they require.

The business of transferring funds from the money market never have taken longer than 3 days, she assured me.

Selena had go to go school to hand in her final essay of the semester that morning. The money still was not in our account by the time she left. Surely it would show up very soon. Her plan was to check the bank on-line from school when she was about to leave, and then do the banking there and stop by the new apartment on the way home.

The money did not appear. She came home, frustrated. We called about the money, and it turned out there had been a mix up somewhere (but not with us!) and the transfer request never gone through. So it would take another 3 days.

Well, it sounded desperate for us, and Selena certainly was dreading the prospect of calling the rental office back and telling them she couldn't make it in for another 3 days (it would look like we were unreliable, and also someone else might take the apartment by then). It really wasn't so quite so desperate though.

For one thing, the financial guy who apparently messed up (who shall remain nameless) did offer to bend himself backwards in many ways to help out and make up for the mistake in various ways (including even spotting us the money from his personal account). Also my mom on hearing some of this story immediately offered to help us out. But despite all of these kind offers, we ended up going to Sandro and Anne (via phone) to see if by any chance they'd be able to loan us the money for a few days (until that transfer finally happens). And they were.

This was easiest because they are closest to us. And they did more than this; Sandro went to the bank and withdrew the amount in cash, just to make extra sure to avoid any delays or mixups with cheques and other types of transfers. Then he delivered the money himself. And further, drove Selena around to straighten out the banking, and go up to the rental office. 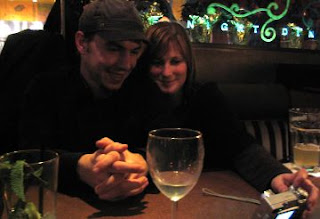 (Here is a (dark) picture of the heroes, Sandro and Anne. Not only do they hand over loads of cash to us on demand... they take us out to dinner a few nights later. This picture is from Sunday night with them at Milestones. You almost can't even hold it against them that they are so self absorbed that they insist on taking pictures of themselves while you are trying to take a picture of them. )

While at the bank, besides converting the cash into a money order (it turns out we can't get a certified cheque because it is not our home branch), she had to get the bank to fill out a document describing the state of our account. This form included places where the banker is supposed to report any NSF charges within a certain period of time. For some reason which we don't understand the bank didn't fill in that part... despite the credit card charge going nsf just prior.

But, despite that bit of niceness, the complications weren't quite over. Selena discovered when she finally got to the 145 Marlee rental office with all the papers and money that the lease required my signature. (I didn't go out running around with them, thinking it best to keep working one whatever it is I work on.)

So! At least the lease got all filled in, and they accepted the money. I had to go up the next day again however to sign the paper. It is now signed, as Selena already reported. But we still have to wait for them to do their credit (and whatever other) checking. And just at the moment, due to some mistake (we are now thinking that it must have been Ken who forgot to sign my cheque before giving it to me), our bank statements don't look all that great. I'm not sure how it will affect a credit check. We shall see.

I'm sure the odds are great that there will be no problem. But there is all of this uncertainty in the air. We *still* have not received the faulty cheque back from the bank. We still have to deal with all of that stuff. 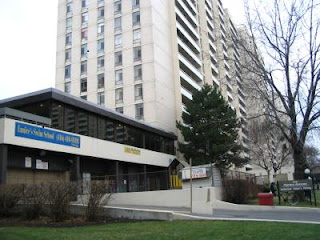 Fun, eh? These pesky details. A little more than scoping No Frills for banana boxes...

This is another view of the new apartment (if there aren't more complications). You can see the daycare and indoor pool which is attached to the building.