Whitney and Michael drove, from Halifax, to briefly visit this Easter long weekend. I mention them first, because having just gone through the weekend pictures I noticed that somehow no one got any photographic evidence of these rare and honoured Easter bunnies. They didn't have much time, however, so after spending a day with us, they hopped off again eastward. Whitney did, the night before hopping off, leave some Easter eggs in odd places... should anyone care to hunt for them. And so that brings us to Easter morning.... 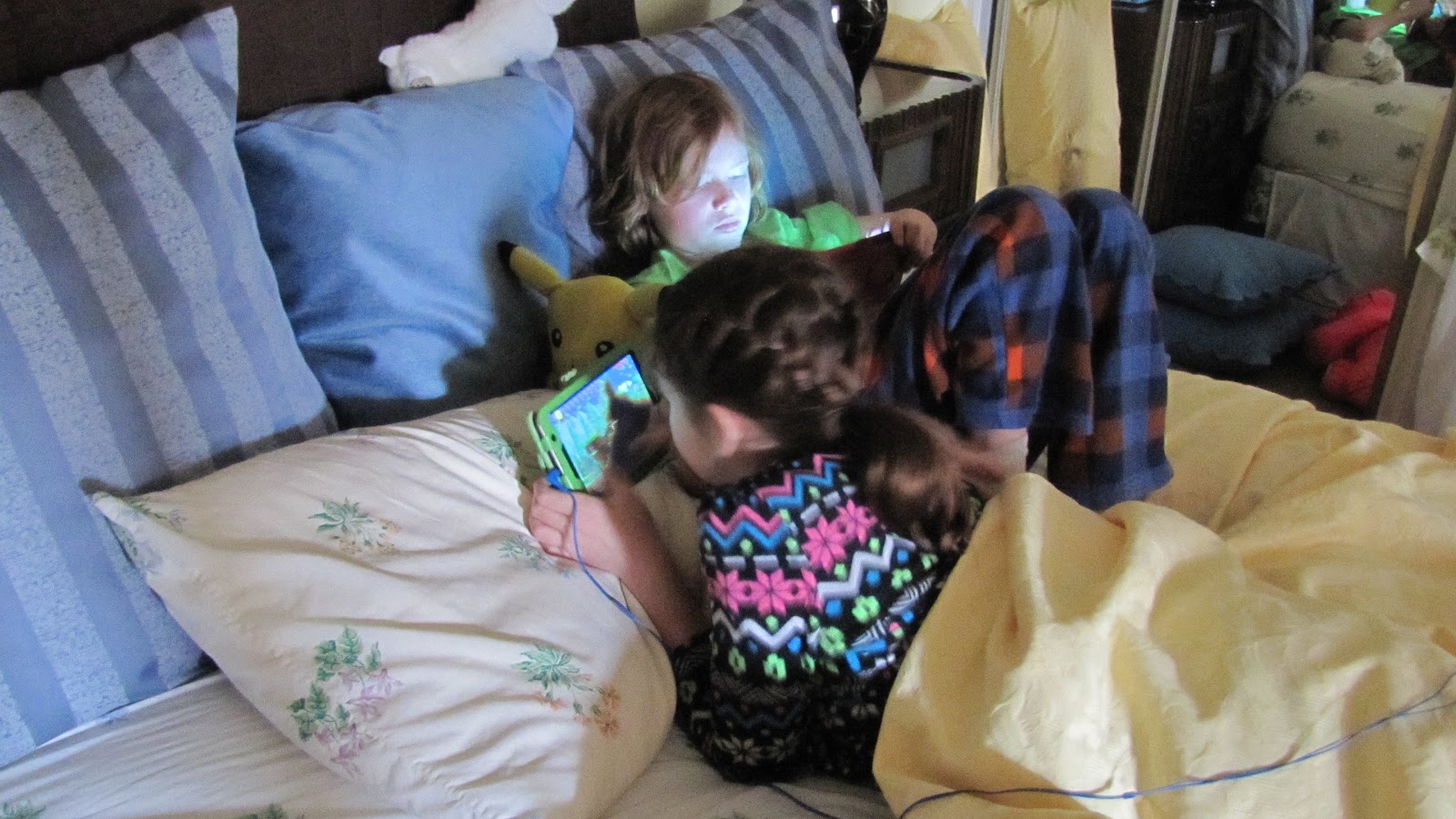 For some kids the traditional Easter Egg hunt is second only to Christmas in excited anticipation. And in fact our kids, surely, were somewhat excited about it. So excited that it seemed the must have not been able to sleep, and thus were sleeping in strangely late the morning of the hunt, while we sat around waiting for some action. Eventually we looked in on them... and there they were, entirely awake, but too distracted in their virtual world to go looking around the house for treats. We should have known. They recently got a new game on their tablets, Terraria, are are a bit obsessed with it. 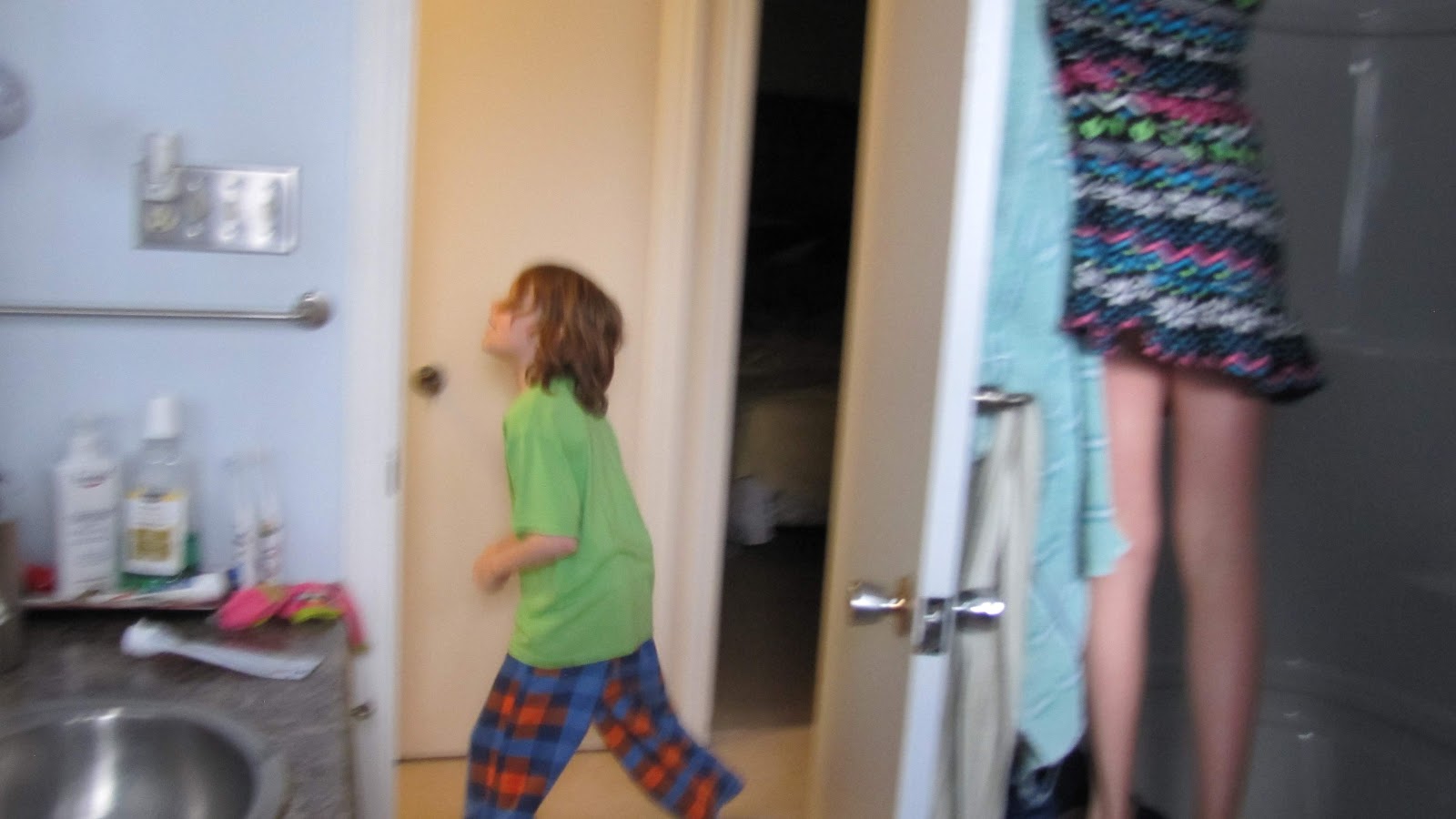 Eventually they got up and came out though, started noticing eggs, and Grammie's house was well scoured. (Though a day later, we still found a few places they missed...) 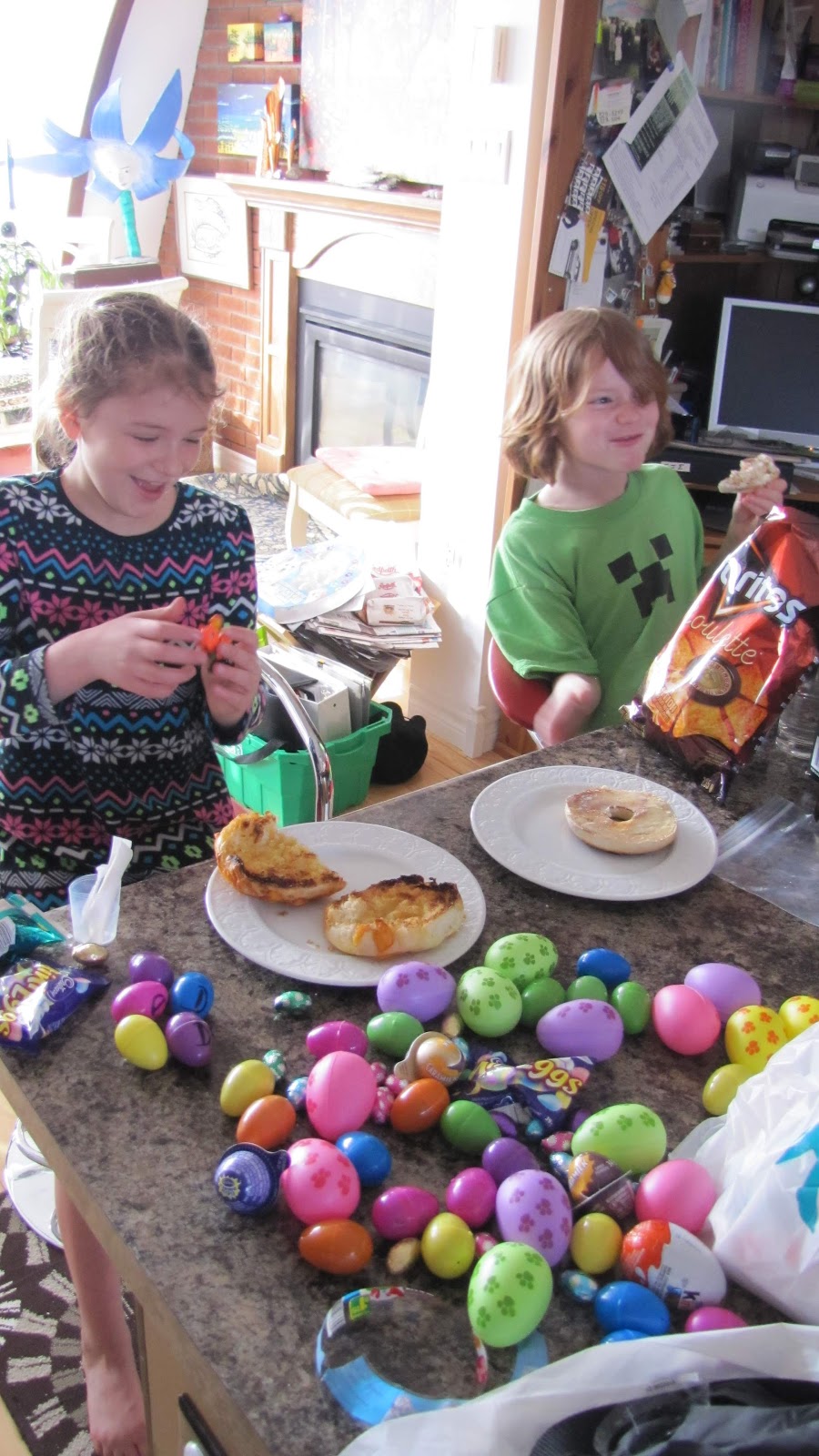 One novelty this year was that Emeth declared he didn't care about chocolate and would rather have chips. Specifically he wanted Doritos Roulette chips, which are his current favourite. So to accommodate the wierdo, five eggs were marked with a "D", and if he found all five he was allowed to exchange them for his own big bag of Doritos. And Istra then got to hoard most of the chocolate.

You can see spoils arrayed around breakfast (but rest assured not all of the eggs are candy/chocolate!)...

Even Valkyrie, speaking of weirdos, showed some slight curiosity as to what was going on at times... 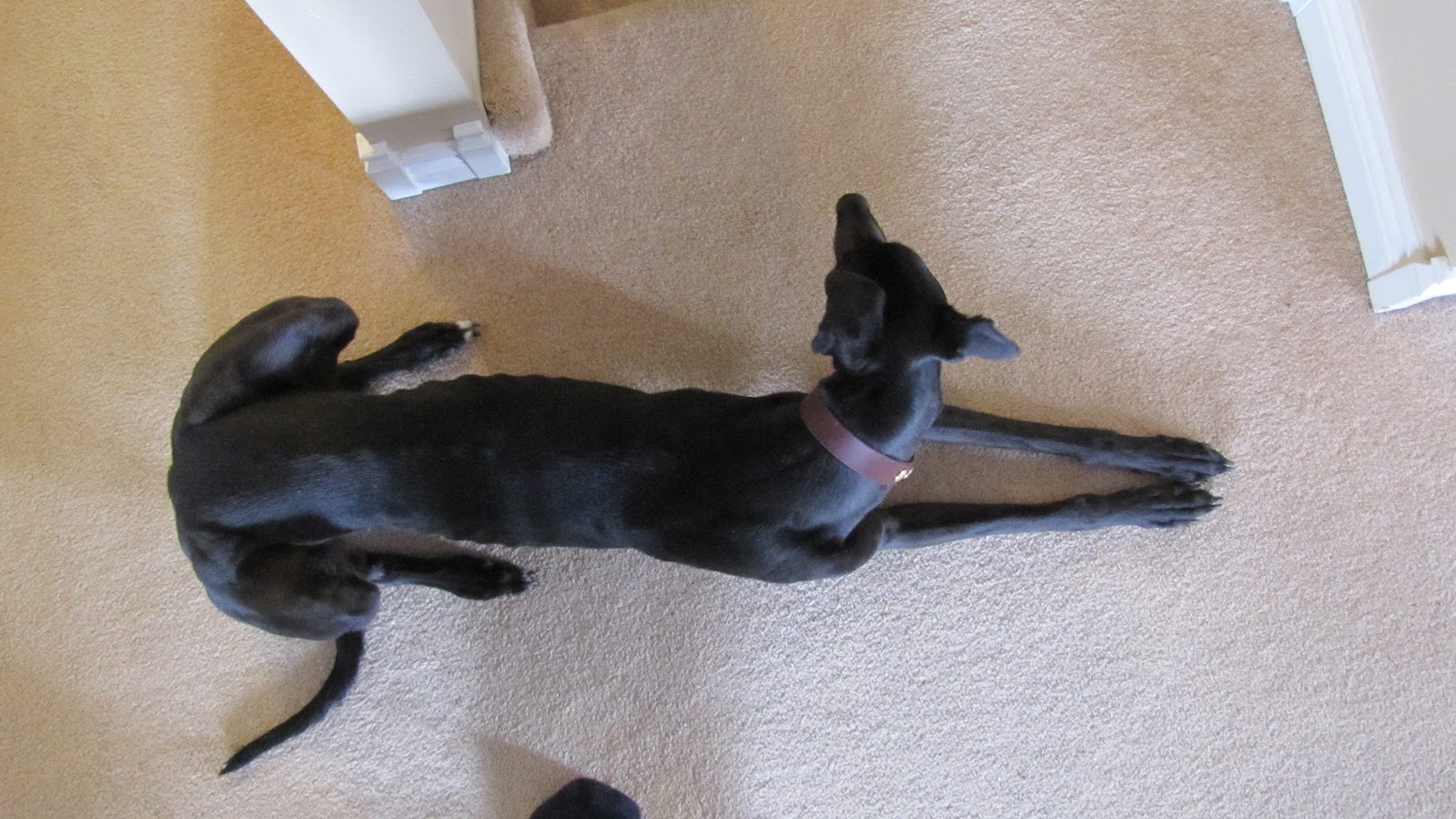 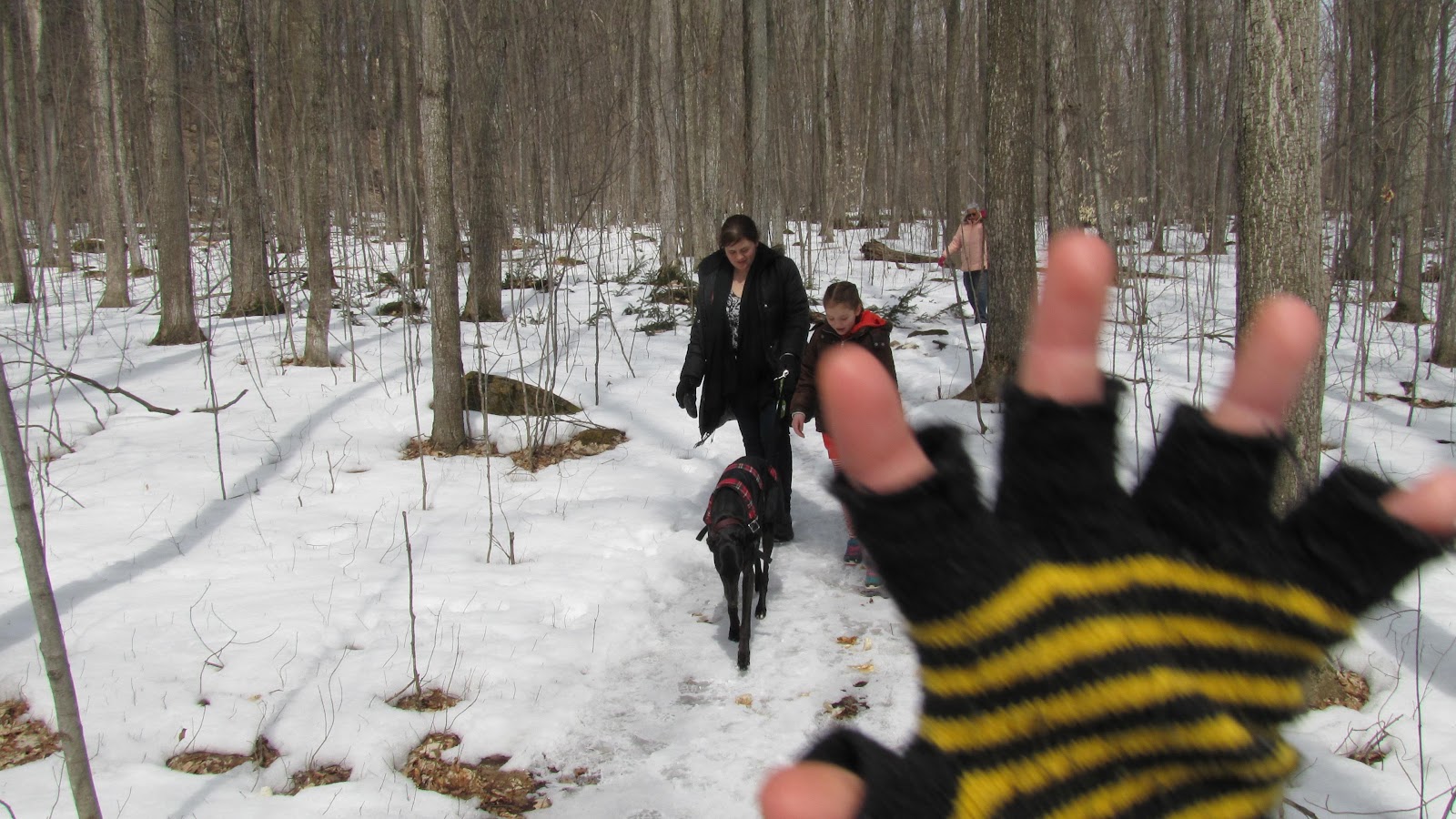 In the afternoon, we went out for a hike in Scout's Valley. A lot of the trails were still surprisingly icy, but it was nice to get out (no matter how much the kids complained about it).

We hopped off ourselves a bit early on Monday to get back home so we could check out the McMaster University Medieval and Early Modern Living History Event. As usual the kids complained bitterly at being forced to go to a cool thing. But nevertheless, want to or not, they got to handle a long bow, see medieval swords and other weapons. Try on a full-face steel knight's helment, and try on a shield -- authentically shaped and painted, but made from aeroplane aluminium so as not to be too heavy. Further they got to hear medieval music (a musician demonstrated to Istra the many sized wooden recorders), and see a bit of dancing. A leather worker showed us an amazing leather mask and tankard, and nearby a weaver showed us how complicated patterns were made, using a card system, on her little loom. They even got to try a medieval cookie. The cookies were made with rosewater and mace. They were delicious! (But both kids declared them weird and disgusting after a nibble. Sad for them. More for us!) 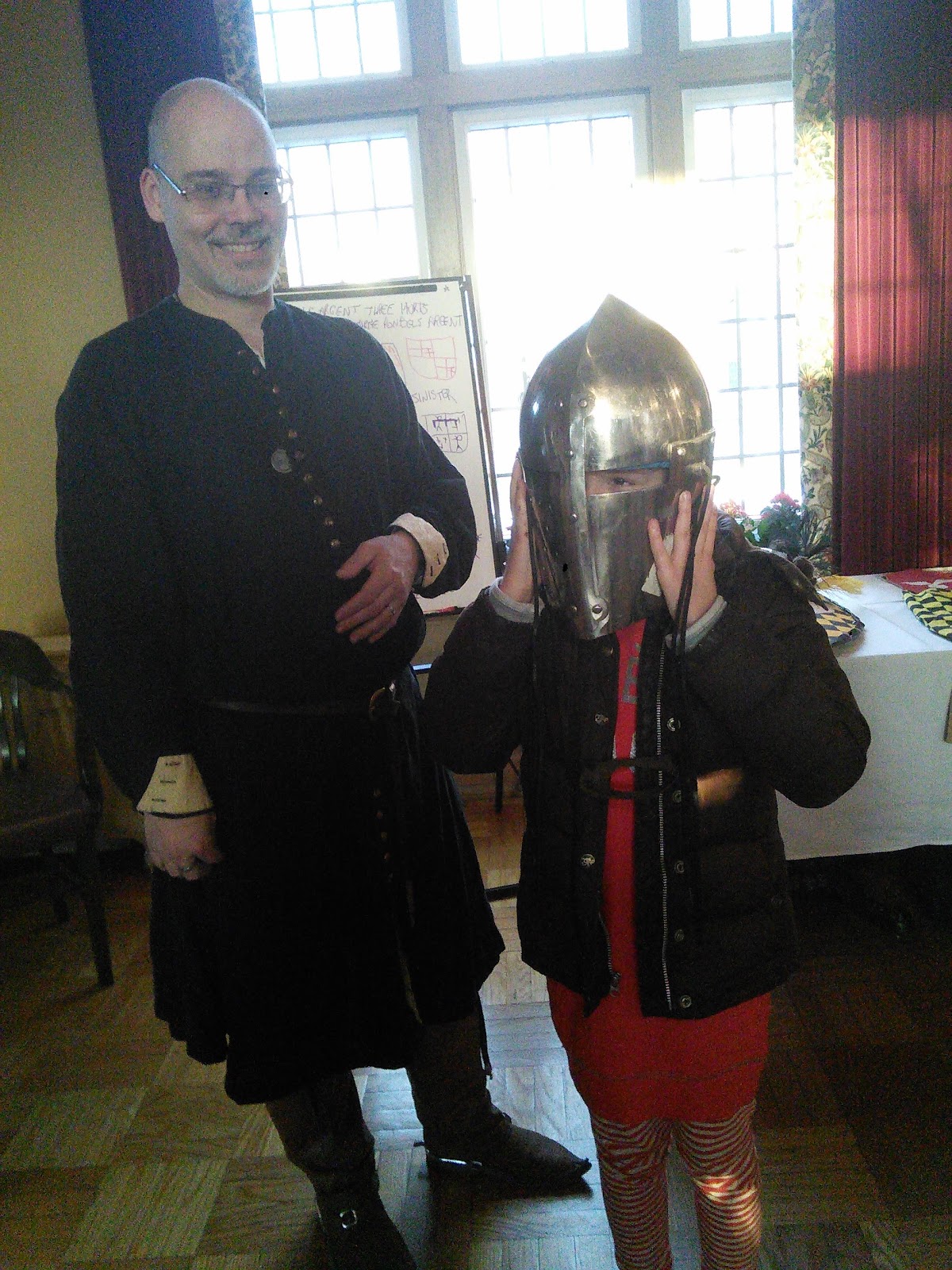 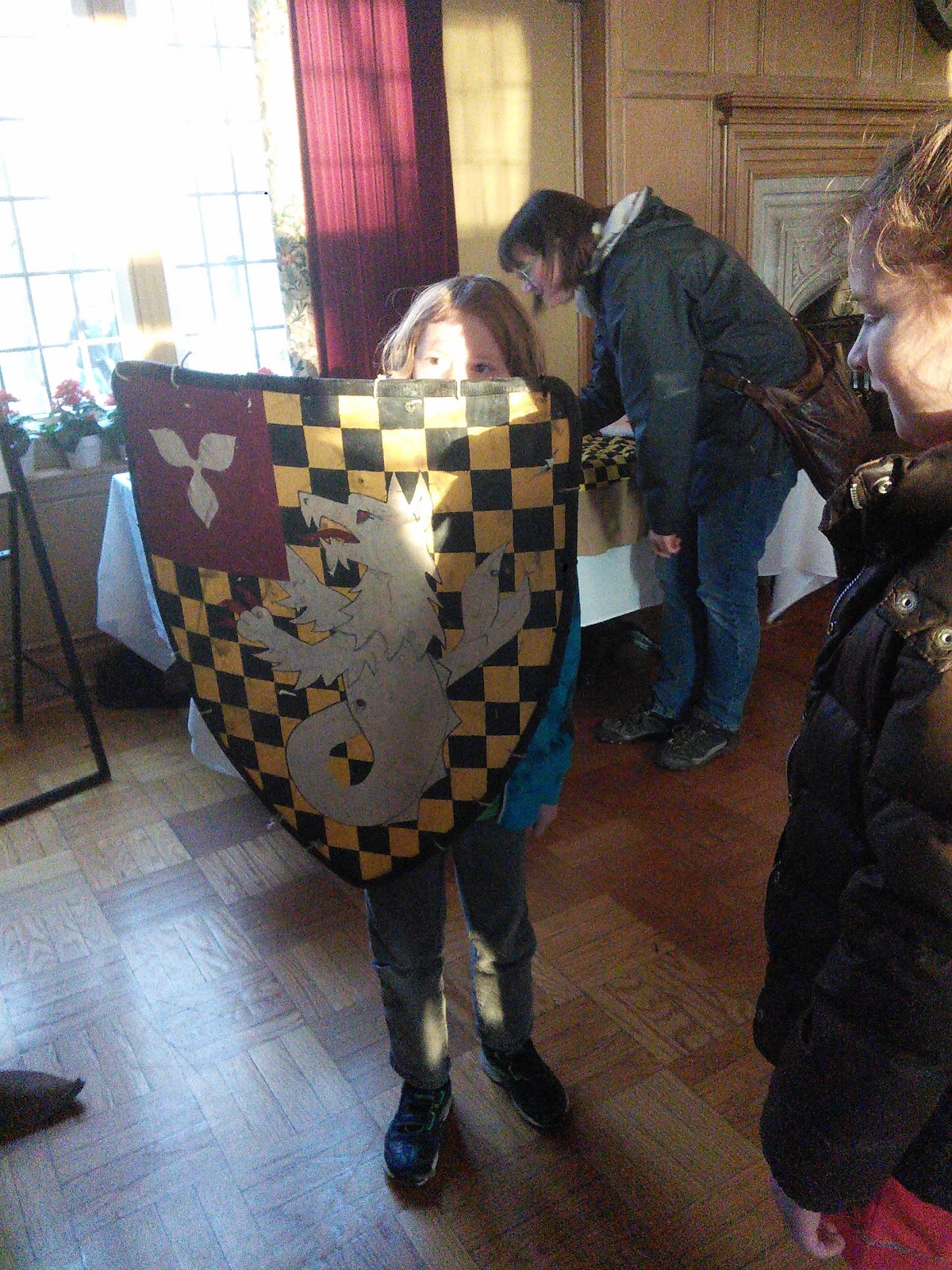 So, wheh, that was much of our Easter weekend. Click here to see all the pictures, if you want.

Email ThisBlogThis!Share to TwitterShare to FacebookShare to Pinterest
Labels: orillia