Cultural experience, for kids and dogs

It's been a while, but we finally got ourselves out to show some solidarity with some of the people who are concerned enough about the oligarchic manoeuvres of our dear government (bill C-51, in this case) to gather on the damp and chilly public streets together... 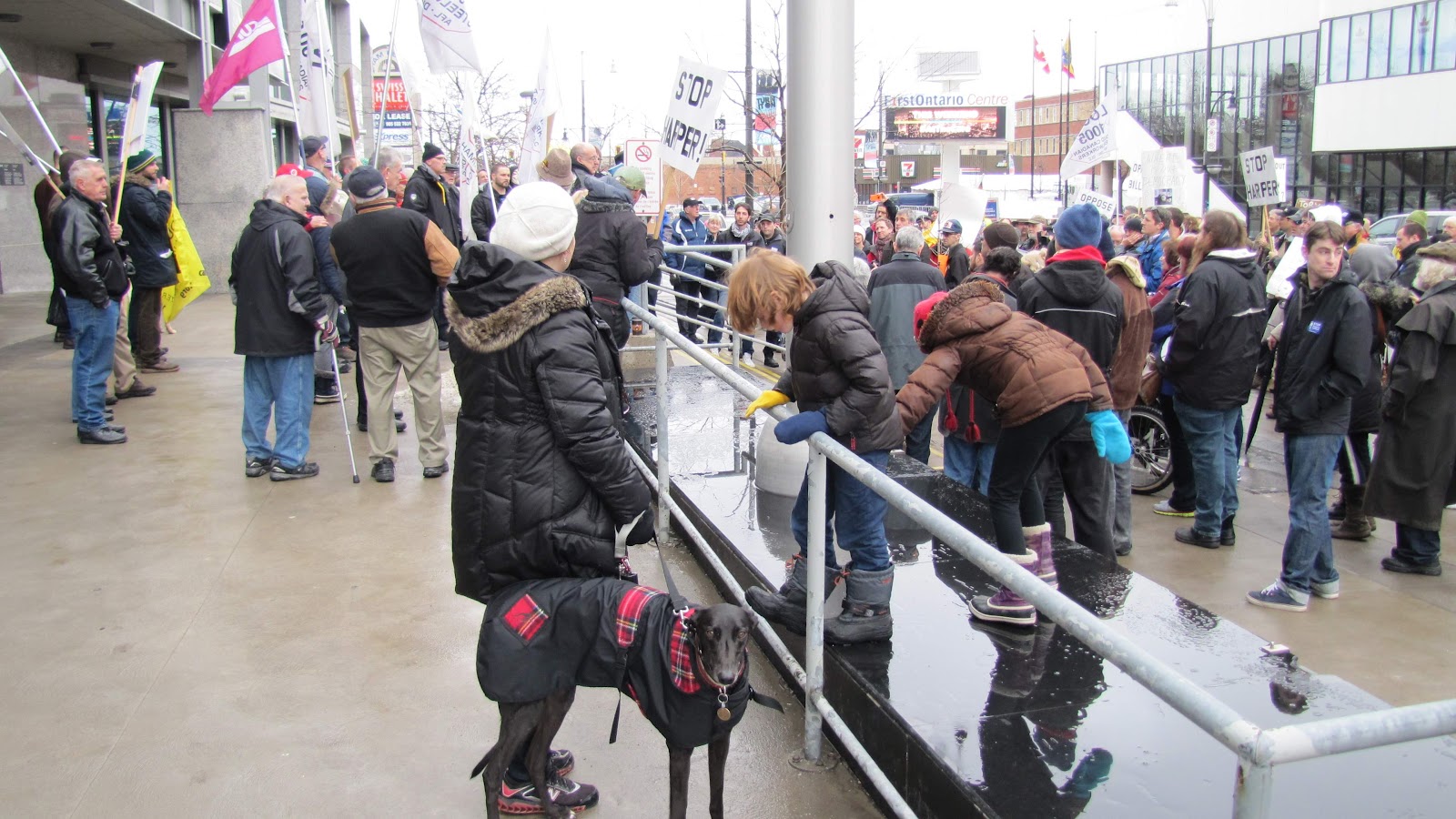 All of us watch demonstrations against government overreach in other countries, and tend to cheer on the participants. Yet when it comes to our own country we tend just to grumble a bit amongst ourselves, and go on with our days. Many times our own protesters are viewed with suspicion, or even denigration. Elsewhere they are interesting, brave, concerned citizens with probably legitimate concerns. Here protesters are often viewed as sketchy people, some with so-called "special interests", or just people with nothing better to do. But are we really so different? 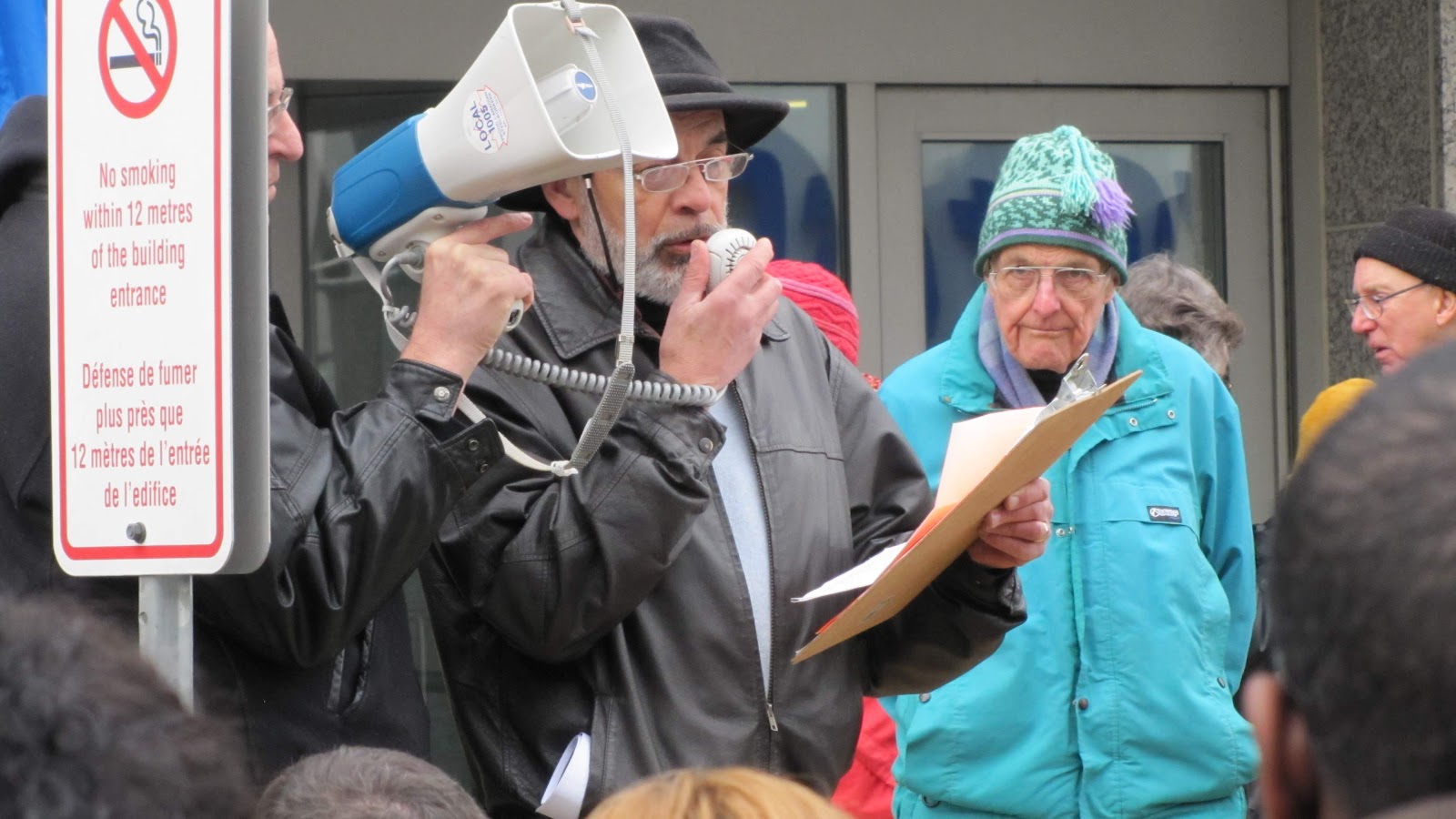 The Hamilton gathering was quite a bit smaller than what we have been used to in Toronto. And in fact Toronto today had a vastly  larger gathering. But something is better than nothing. 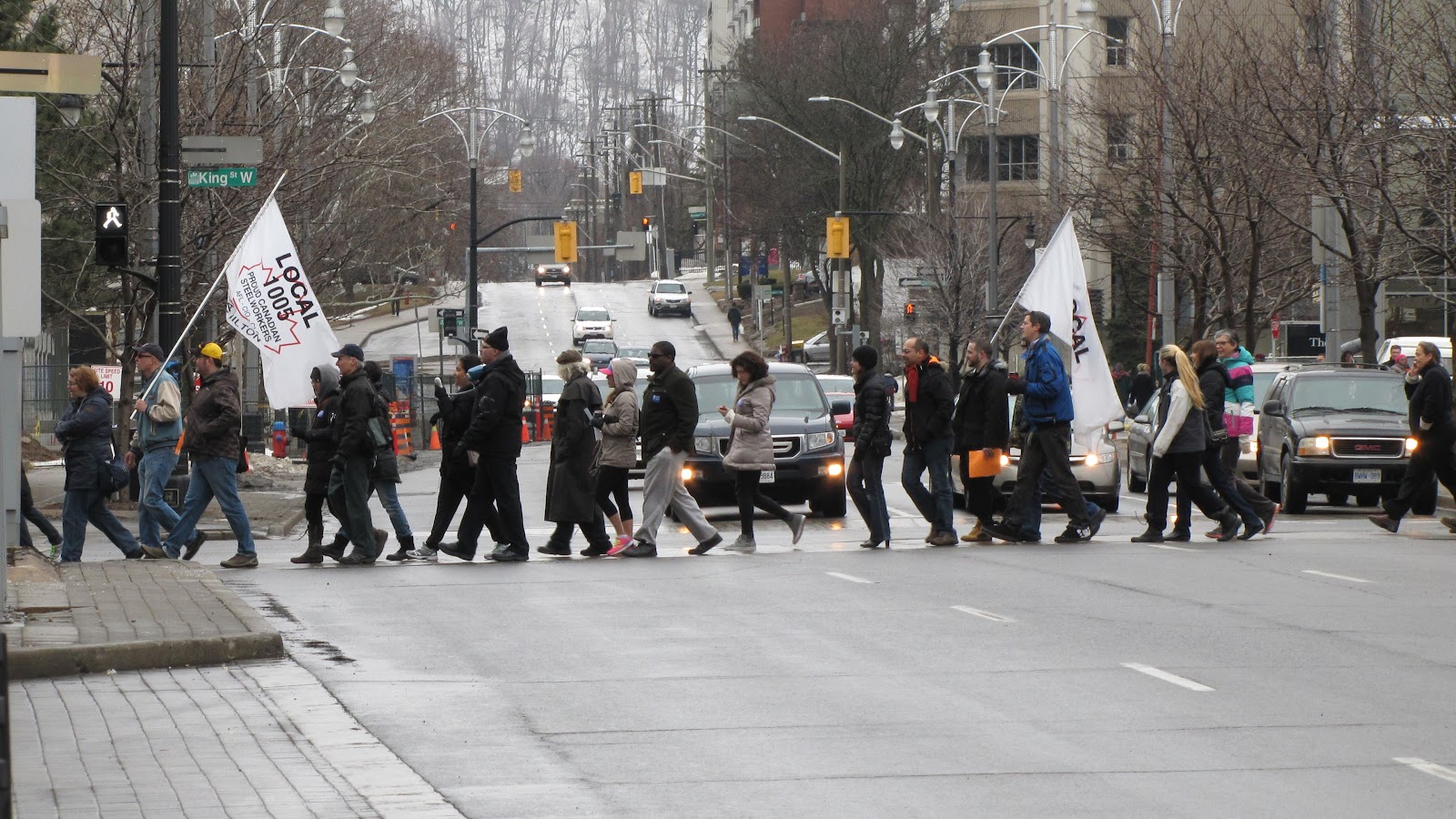 Another thing we noticed that was very different from Toronto demonstrations, was the complete lack of visible police presence. At Toronto protests, no matter how benign, there tend to be loads of police around. Here today we didn't notice any... until on our way home... 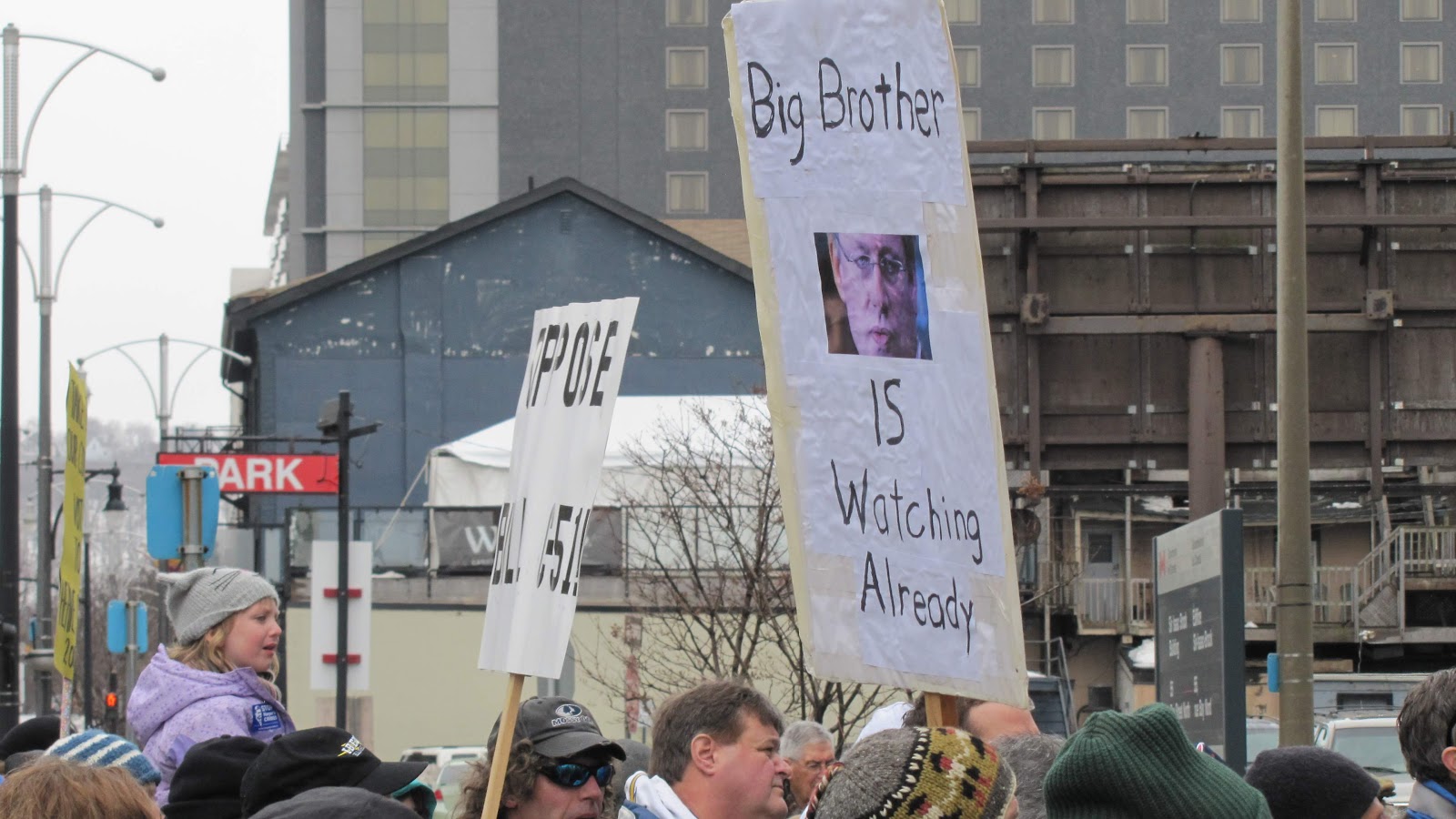 On our way home we discovered a lane of the road blocked off on John Street, and the Jolley Cut access. And there were loads of police all along this this route, directing traffic at intersections, and generally securing the lane. It turns out there was some sort of marathon or charity run going on. I've searched everywhere I can think of (newspaper, Hamiton web sites, etc) to try and find out what the event was, but have come up blank! Which is weird, because apparently every cop in the city was occupied taking care of it -- so much so that they just let us silly subversives run wild through the streets! 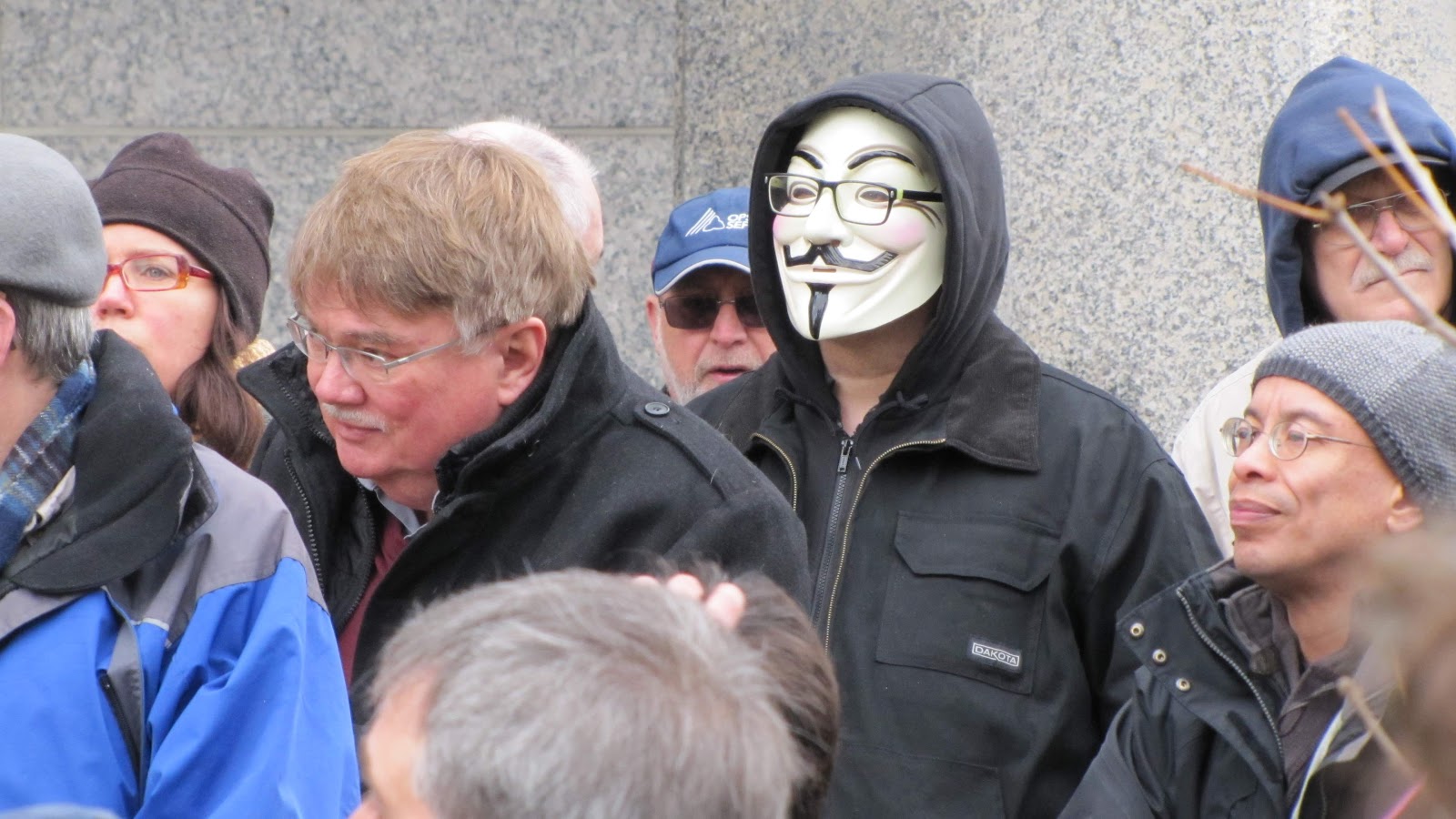 As you can see above, at least we saw one friend we recognized.

To be honest, we're also lazy and busy, and have to overcome great resistance from the kids who just want to stay home and play Minecraft all the time, and so we almost didn't get out and down the mountain. It was the idea of combining the demonstration event with, afterwards, a walk on the waterfront, and indulging in a burrito downtown, that may have pushed us over the edge and out. 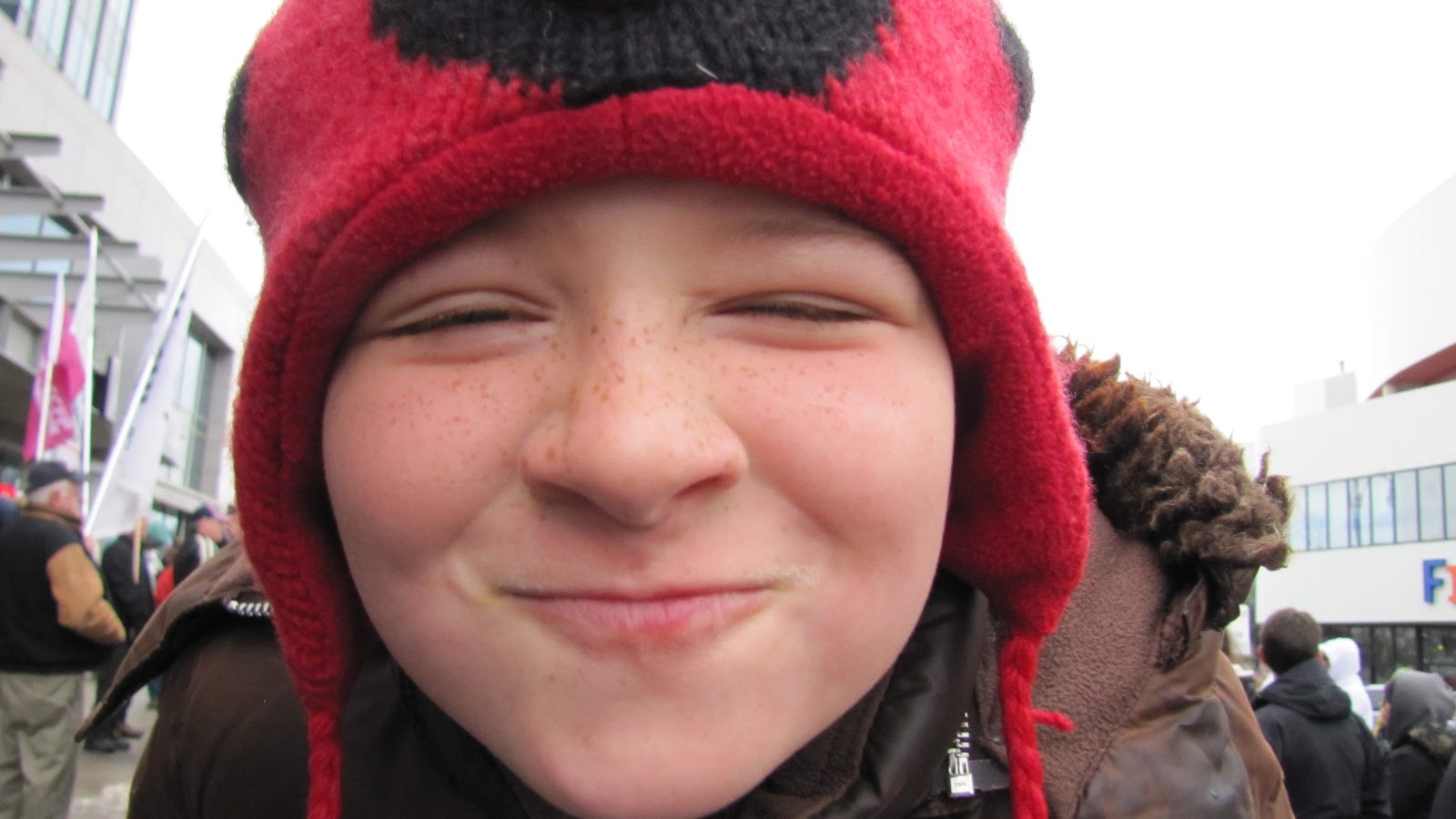 Ironically we ended up nixing the waterfront walk because we were tired and the kids were still moaning to go home and snuggle with the warm and cuddly computers after our march around Jackson Square. Nor did we end up with our bonus burritos, because we just couldn't figure out how to find a place to stop near enough the burrito place on the crazy downtown streets without too many complications and additional stresses. 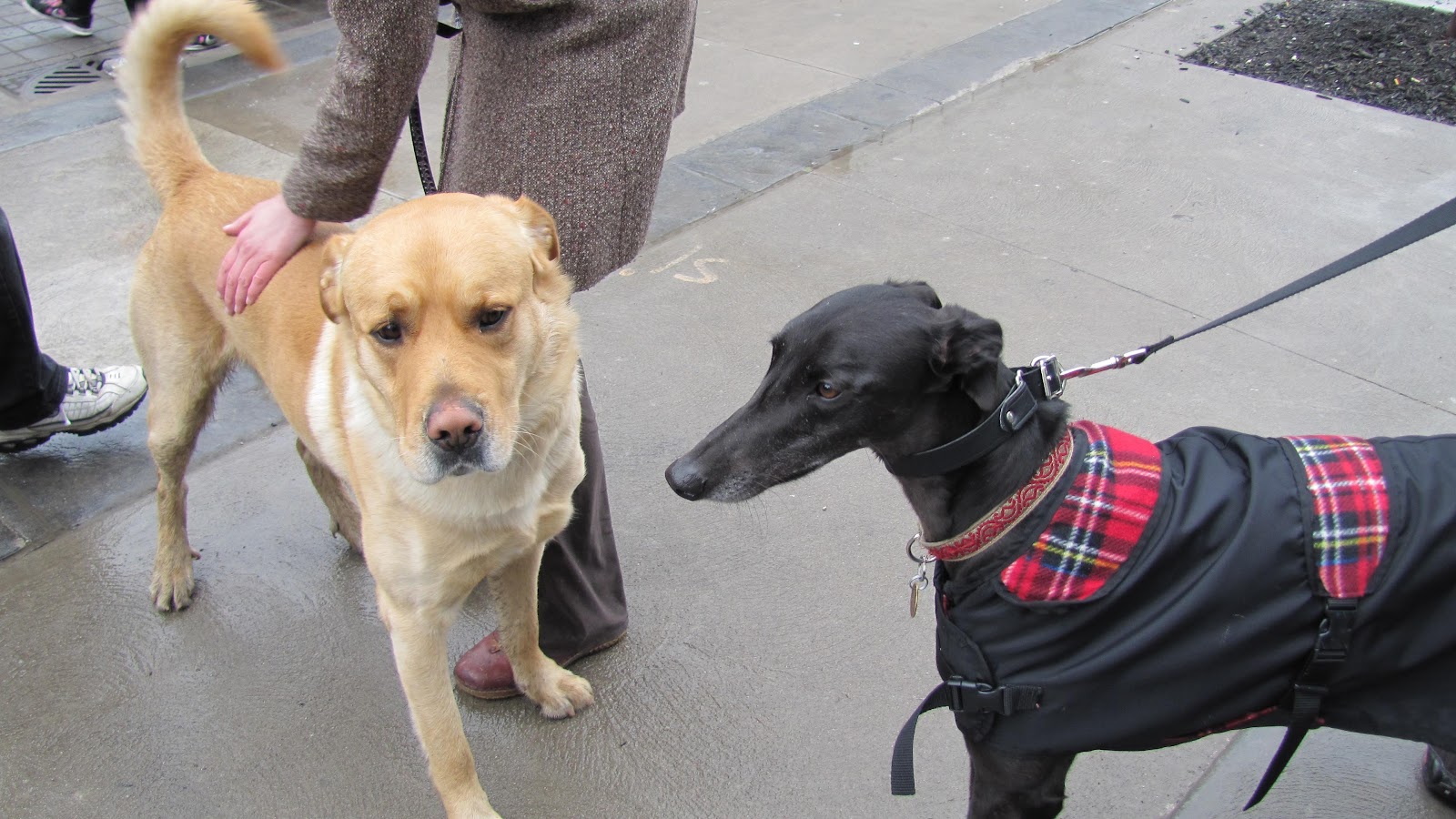 Anyhow, Valkyrie made a new friend. And we had some fun and are glad we were able to get our bodies down there, despite everything. And that is the story of the momentous events of today, and a few of the thoughts surrounding. And tomorrow we hit the road...