Valkyrie in the house... 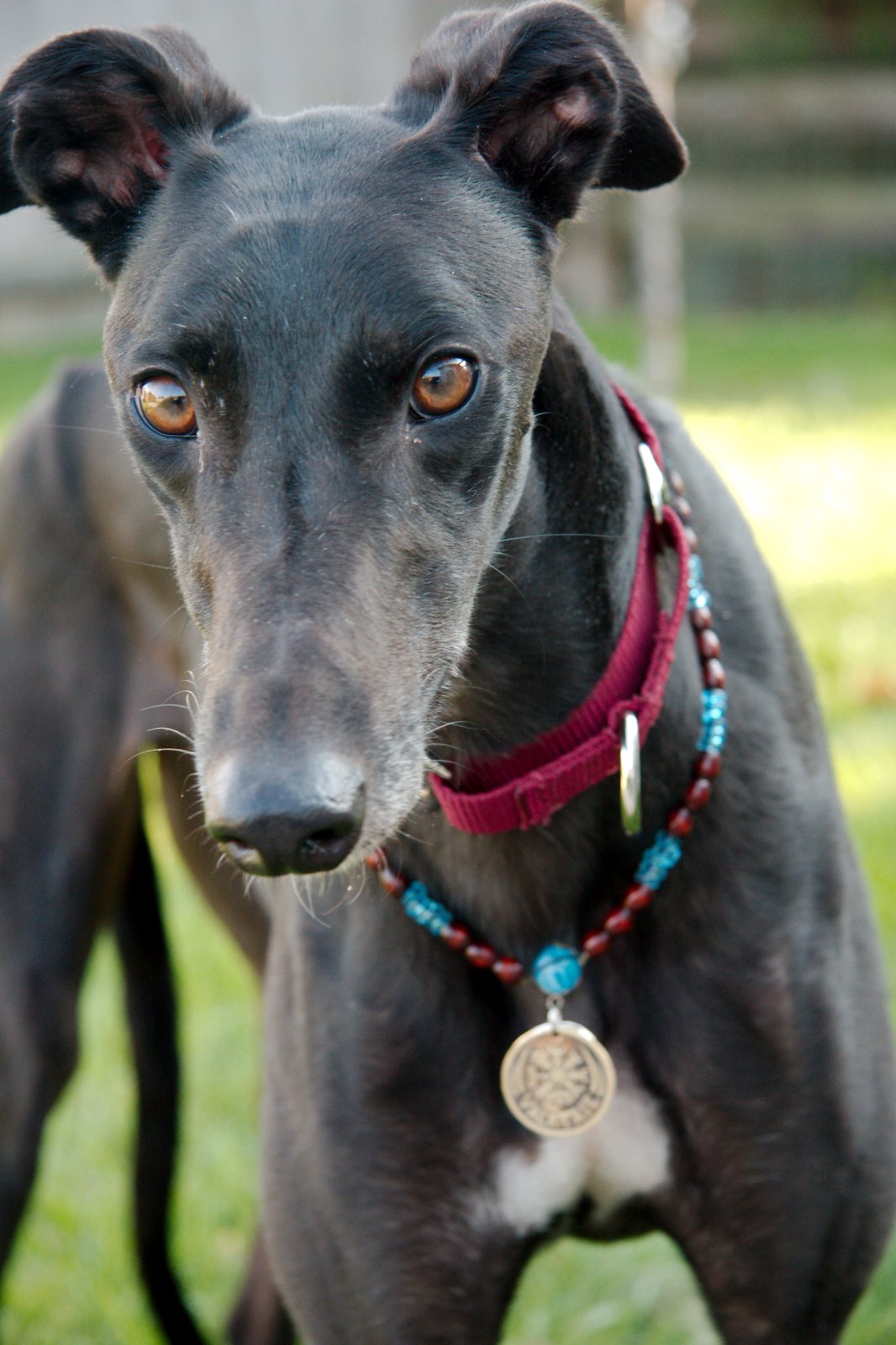 Selena's age-old dream has finally come true. Brace yourself. She has (we have) a dog. And not just any dog, but her dream-dog; nothing less than an actual greyhound. Her dream-dog, with naturally nothing short of a mythic name. Friends, meet... Valkyrie.

Selena told me we were "just going to look" at the new dogs that had just come up from the States to Greyhound Relocation & Adoption Canada kennel, for fun. She later tells me that I "should have known better".

Valkyrie is an an ex-racing dog, who was not very good at racing. (Not unlike this oddly familiar fellow.) I'm not sure if that makes her lucky, or unlucky. Maybe a bit of both.

Anyhow, we went to pick her up... (I am surprised to suddenly realise) just yesterday! The adjustments and acclimatization has just begun. But here are some scenes from Vallie's first day with us... 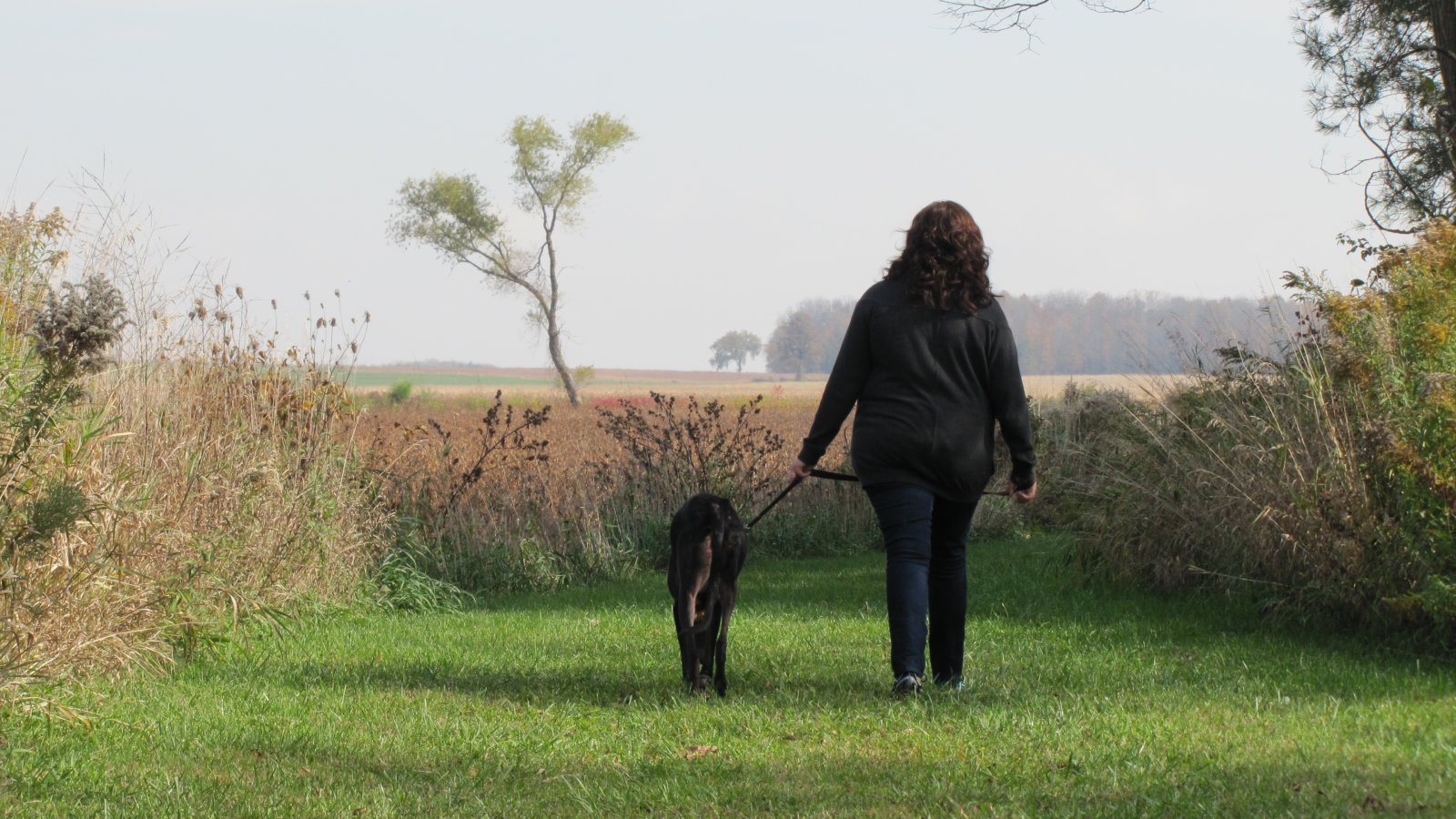 The GRA kennel occupies a building on a farm about half way between Woodstock and Tillsonburg. There is a small lake at the back of the farm property with a nicely mowed walkway around part of it. We took Vallie out for a last walk around the farm, to stretch her legs before the car ride. 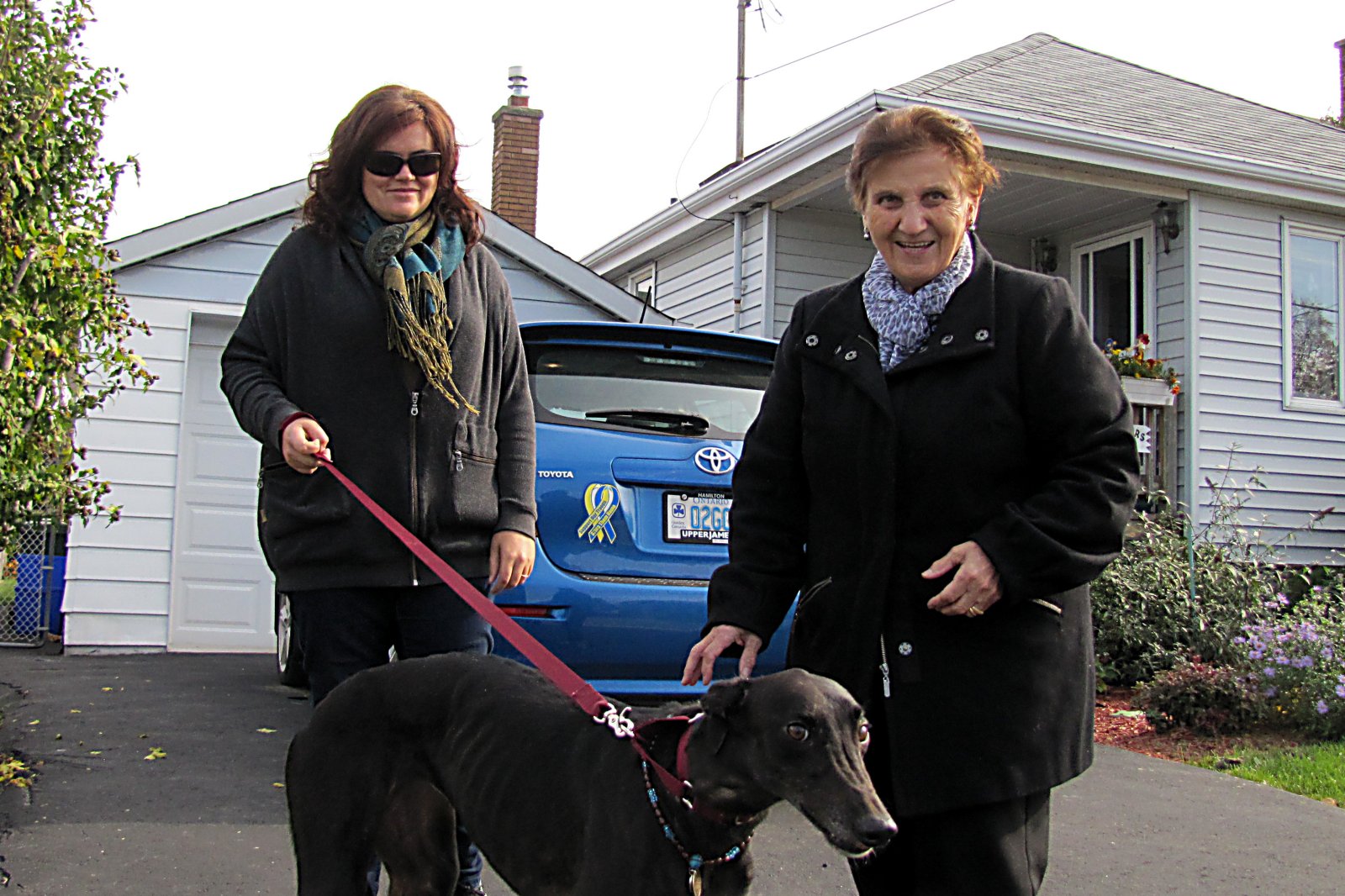 Valkyrie tolerated the car ride quite well. She had to be lifted in and out. We put the seats down, and provided her some blankets and her new crate mat. She stood there wondering what was going on, but once we got out to the road she lay down, and more-or-less relaxed for the rest of the trip.

When we got back, it proved awkward trying to get her out the back passenger door, so we opened the hatch back. Much to our surprise, Valkyrie suddenly leapt out immediately that way. So, surprising was it that her leash slipped. Luckily she didn't try to run off though, but just wandered onto Maria's lawn, where a grip on the leash was quickly recovered. Maria, our neighbour, came out immediately to see what was happening, and greet the new dog. Valkyrie, for some unknown reason, took a real liking to Maria --- even before Maria went and got her some treats. Maybe because she's relatively small and dressed all in black? Who knows! 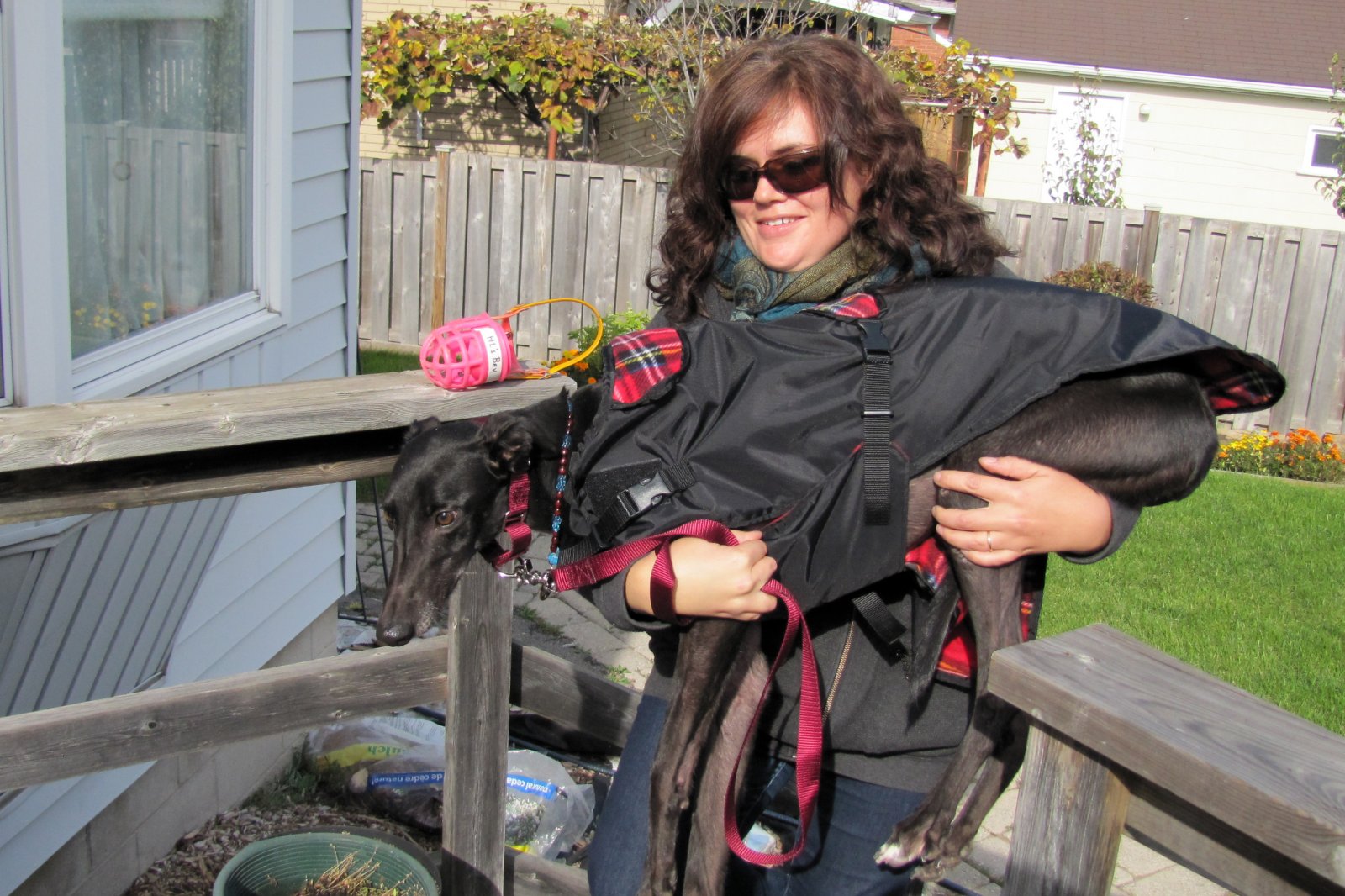 Racing greyhounds lead very limited lives. Valkyrie is 2 years old, but she has probably never used stairs before. There are stories of greyhounds confused and stymied by what seem ridiculously obvious obstacles in their paths, having no experience of anything in their generally the flat way of their long  legs before, to which stairs are indeed highly complex maze in comparison. Vallie certainly (as we expected) had no idea how to navigate the stairs up to our door. (We took her around to the back, as there are a few less steps.) So here you see her nervously being lifted up the steps.  After barely more than 24 hours with us, and many attempts with varying levels of assistance, she is now already going up (the last two times) and down the stairs herself like a professional stair traverser.

You can also see here (sort of), Valkyrie's stylish new coat. We had just put it on her to show it to Maria. 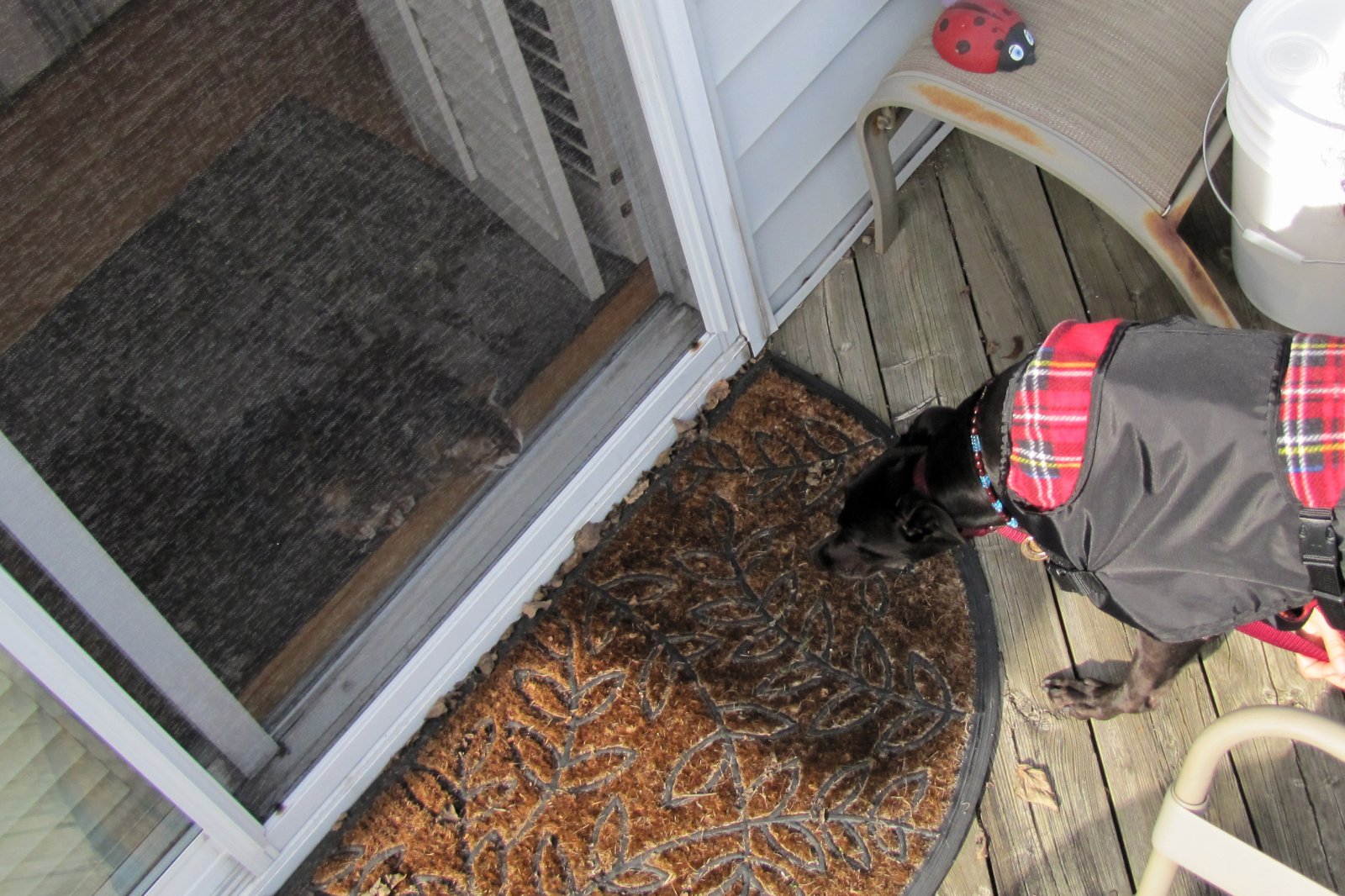 When Valkyrie made it to the top of the stairs she met her next obstacle. The loudly wailing cat! Do not misunderstand, our cat always loudly wails! She has no other volume setting than 11. Her loud wailing was pretty much normal; though she did look a bit surprised and confused to see this big black alien creature coming to the door. Vallie was moderately interested in this loud furry little creature, but also cautious. We put Valkyrie's muzzle on her at this point, just to be safe. It really turned out to be more of a non-event than even we thought it would be. Both creatures seemed nervous of the other, the dog being probably the more nervous of the two. Neither acted aggressively, or attempted to flee, despite the close proximity.

The cat and dog have had a few more run-ins since that first meeting, going to and from the front of the house (where her crate is) to the back door. The most dramatic was when Win stood in Vallie's path and refused to move. Valkyrie merely showed curiosity and put his head down to sniff Win more closely. Win hissed and lifted a threatening paw. But Vallie backed off with a "so what's her problem?" look, and that was that.

Speaking of the back door, however, I can say that we've now sadly also had the experience that many ex-racer greyhound adopters report: the dog, not understanding the concept of transparent glass, walking nose-first into the door. Not only that, but earlier she also walked through our already-frail door screen -- it probably needed replacing anyhow. So it goes! 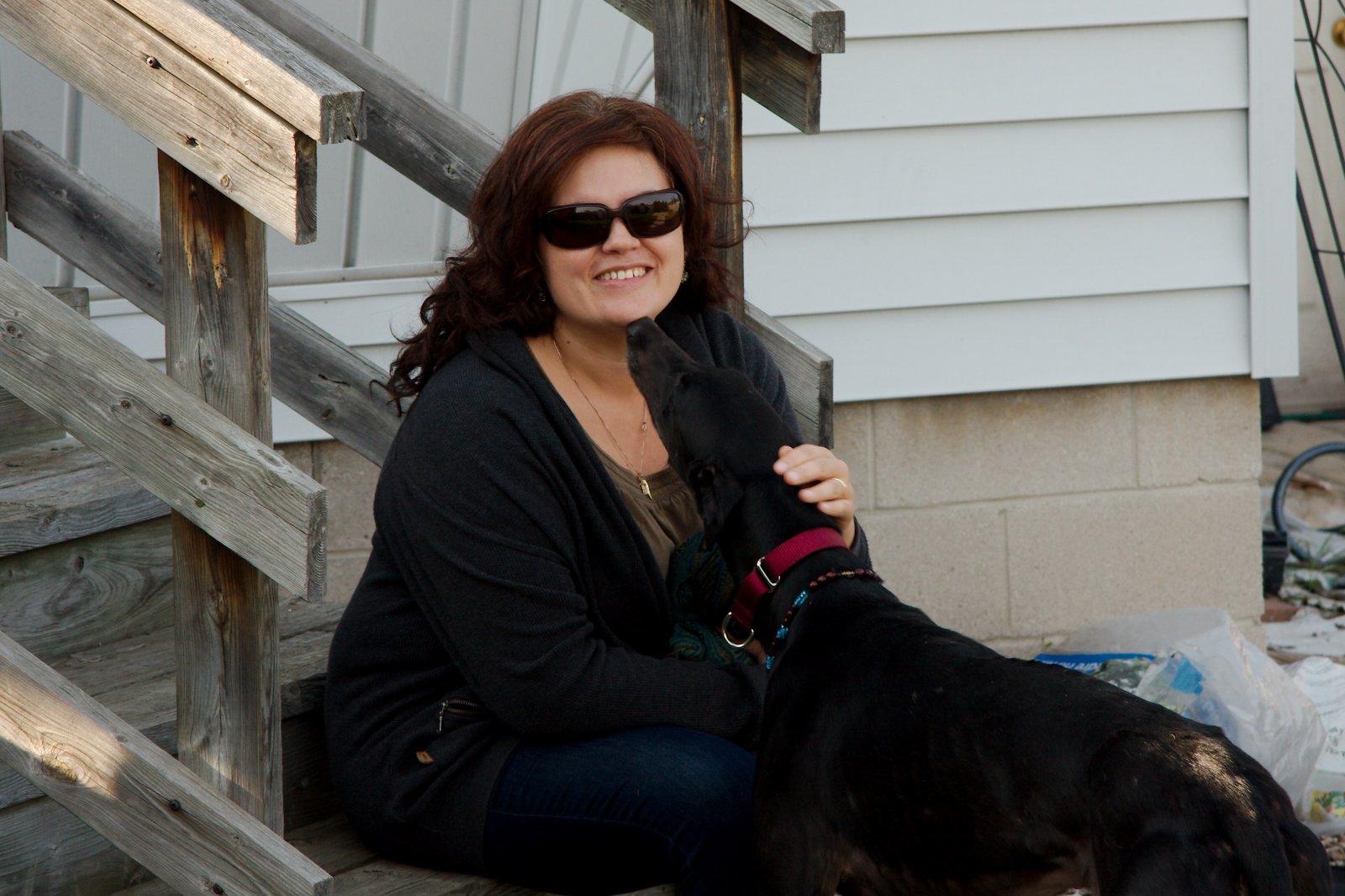 Anyhow, despite the back door/steps traversal complications, backyard time getting to know each other and the lay of the land has been fun.

Mommy got her first kiss.

And we saw her sit! Greyhounds are famous for generally not being able to sit like other "normal" dogs -- their legs work differently. But our greyhound is clearly super talented, and has figured out a way to curl her rear end around and sit on it. At least once! Amazing! 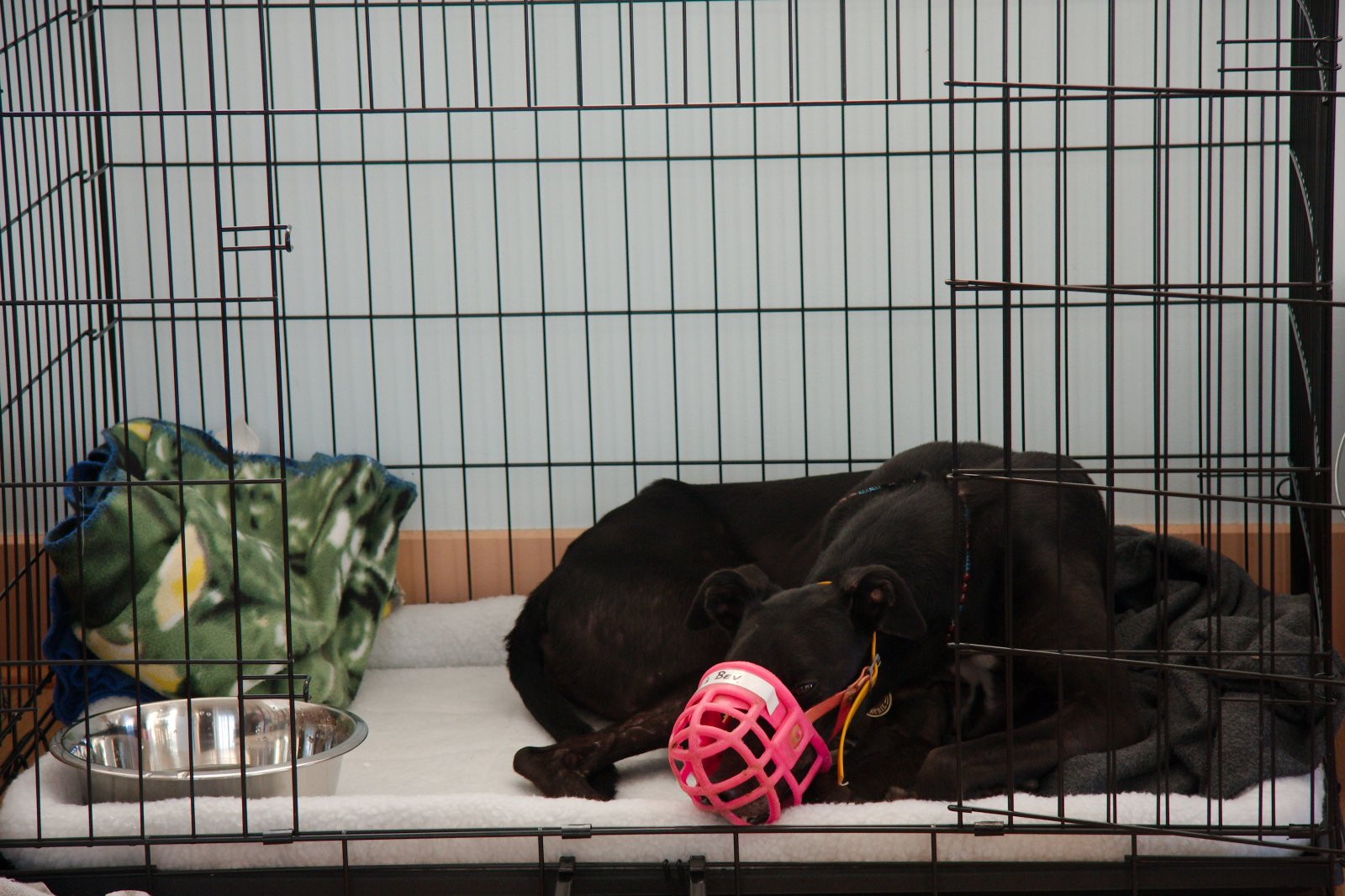 When we brought Valkyrie into the house the first time, we took the advice of dog training books and took her straight to her crate. We also figured this is what she is most used to, so would probably feel most comfortable with. This later thought, it turns out, is the rub (as Shakespeare would say, if he were here). We really can't get her to come out of her crate. She comes out only when her leash or harness is shown, and only to make the trip to the back door and go out for a walk or relief. When she comes in, she goes straight back to her crate. If we interfere with her going back to the crate she just stands like a statue and looks up at us in seeming confusion with sad eyes.

The very first time she went into her new crate here, we closed the door on her for a while. But we didn't feel right with it closed, so we decided to put her muzzle on her and leave the door open, and see how she'd respond to that. She didn't respond at all. She entirely ignored (seemingly unaware) that the door was open, and neither did she acknowledge the muzzle. She just curled up and lay there. After a few more trips through the house, we dispensed with the muzzle because it seems clear she has no aggressive (or even defensive) inclinations towards any creature in here. (Besides, one of us is watching her all the time.) And we've left the crate door open always, except while we slept.

She initially wouldn't even eat food outside her crate. We've taken to putting her bowls at feeding time just outside the crate door, and are moving them further away little by little. In time she will learn that she no longer has to be in her crate every moment when indoors. In fact, we want her company. Her new job is to be a part of the family. 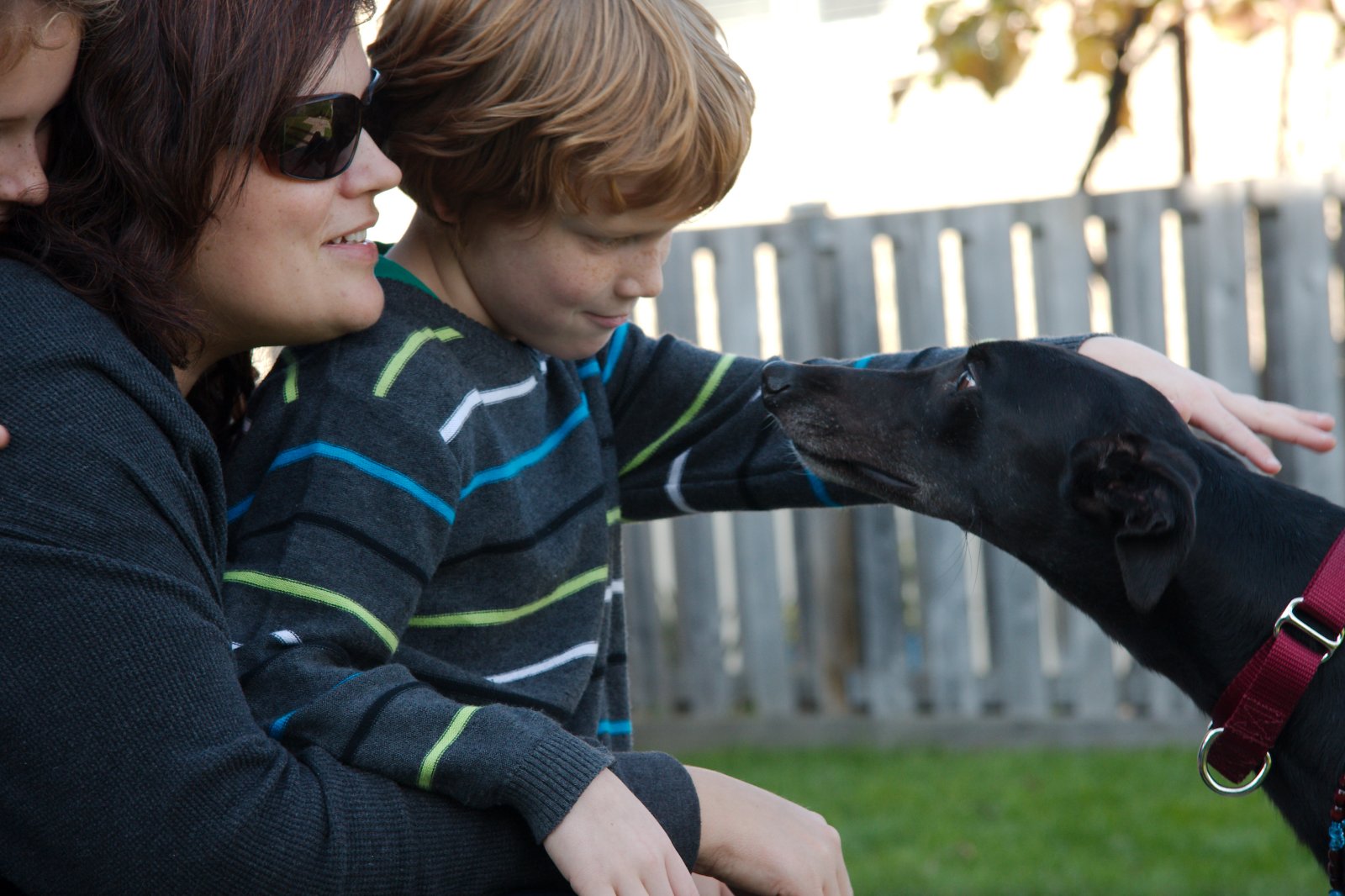