Here is something like what Selena's "Decolonizing Bodies" class is up to today. This picture is from the trial run she did of the recipe this weekend. What you are looking at is sadza, a Zimbabwean (and other African countries) staple food made from fine corn meal, served with many things. In this case Selena is offering a spicy tomato relish, with greens. She is actually giving a short presentation responding to some elements of Tsitsi Dangarembga's Nervous Conditions. Sadza is a feature of life in the story, so Selena thought it would be interesting to make some for the class to sample while she presents and they discuss. She's weird like that. 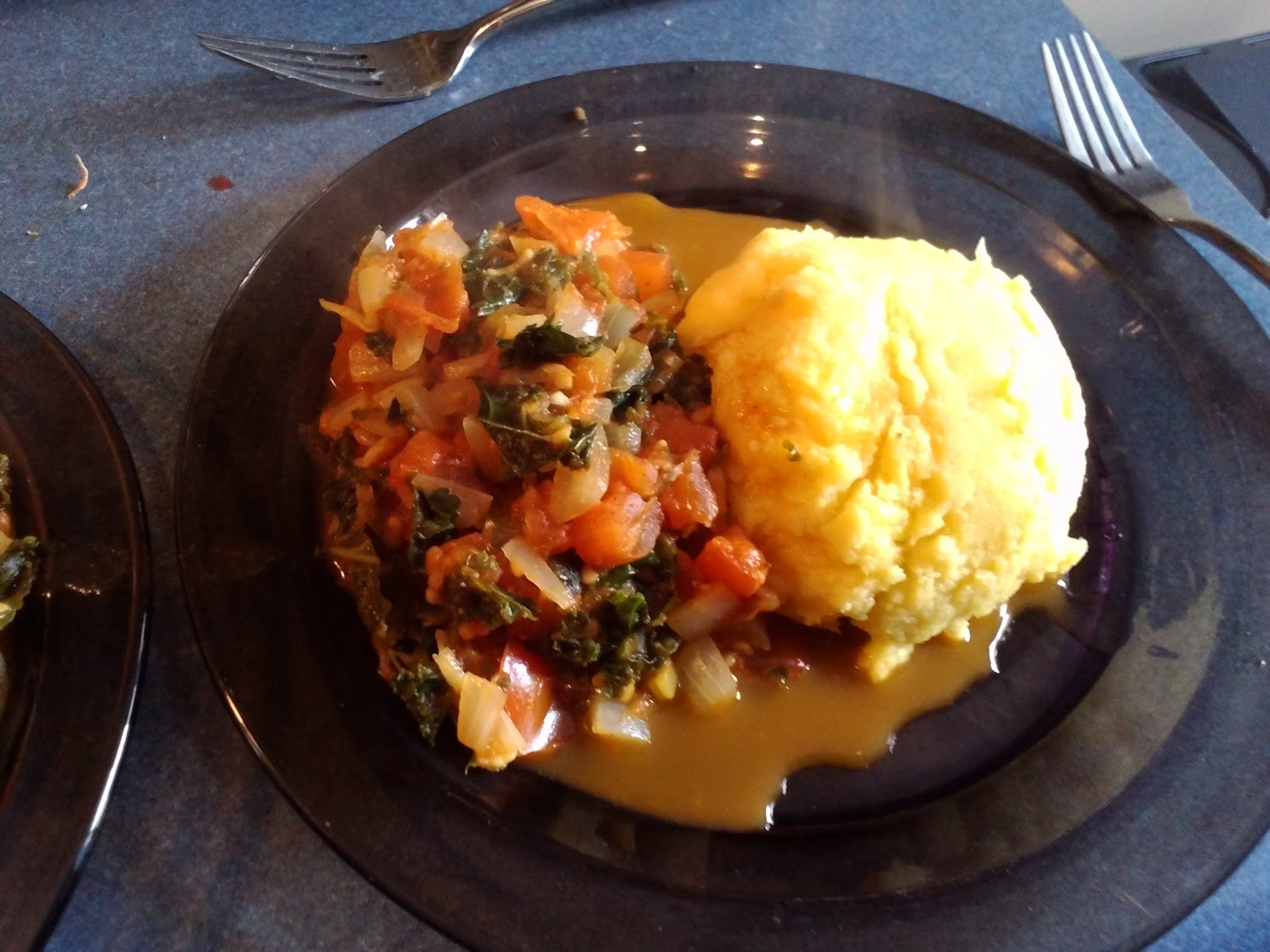 And by weird, of course, I mean great.

That would be the end of the nice story, except that, as it turned out, suddenly yesterday just when she had intended to make the stuff some combination of mysterious conditions nervously coincided and she came down with a severe migraine. She had started to work on the tomato relish, while I went out to fetch some last minute forgotten ingredients.By the time I got back, she had gone back to bed, feeling too poorly to continue (the smell of food actually making her feel worse). So, it seemed it was up to me -- entirely out of my competence with many of these ingredients -- to try to finish putting the stuff together.

My guide was the recipe from the internet, and my memory of how the trial run had tasted and looked. The recipe instructions were fairly detailed, but many of the details were opaque to me. I have never worked with kale. I've never ground my own coriander seeds. And so on! Oh well! I figured at least probably no one in her class would be very familiar with Zimbabwe cuisine, so if I mess up the spices and make it taste really weird maybe they'll just think it's that much more exotic. And if I mess up the spices in another way and it just tastes bland, well then maybe it'll be considered as a "Westernized" version, and at least no one will have a strong reaction against it. Who knows!

In the morning Selena checked it out. After a slight pepping up with a bit of salt declared it "okay". Wheh! She then went on to make the actual Sadza itself.

I'm sure the class will have fun with the food, and appreciate Selena's effort. They never need know that some part of their semi-authentic Zimbabwe taste experience was hacked together by the awkward husband in desperation late the night before.