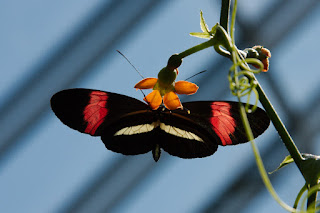 As if their crazy flitting, which somehow they are able more-or-less to transform into directed flight, isn't hard enough to comprehend, it turns out no one really knows even where their name comes from. There are many theories. Perhaps the "butter" originally referred only  to yellow coloured creatures. Maybe it has to do with old notions that they ate milk/butter/buttermilk if it was left unguarded. Less pleasantly, it is suggested (based on other languages) that the "butter" could refer to the consistency of their excrement. Yet another theory is that the "butter" was really the very similiar (in old english) to "beater" (butor) -- as of wings?

Regardless! We visited the Butterfly Conservatory a few days ago. The Conservatory did not bother our little heads with the etymological or aerodynamic conundrums mentioned above, it just gave us butterflies, butterflies and more butterflies. It was quite nice (though also quite crowded). So, of course, I took way too many pictures of butterflies. And butterfly-like things.

(There was an exhibit of the work of a doctor (or artist, or something) who apparently practiced radical plastic surgery on the heads and faces of presumably horribly sadly disfigured insects, the goal surely being to give them back a sense of dignity and a hope of a mostly normal life. See for yourself more examples, by following the link in the previous paragraph.) 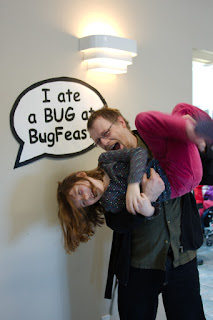 Also, for some unknown reason, there was a bug-eating room. Despite our vegetarian status, I decided to take the opportunity to try the caramel popcorn with dried crickets. I mean, come on... popcorn. It was a bit disappointing. There wasn't much cricket, really. It seemed like mostly cricket wings. It just seemed like extra popcorn husk. They stuck in your teeth. And the popcorn wasn't that great either -- probably stale from sitting out untouched all day, or the bottom of a popular batch?

So, we were in Hamilton for much of this March break, with (besides the family interludes) many activities (semi-) planned. The first stop was the Children's Museum, where many crafts were done. The kids made their own sheet of paper. They colourfully rubbed leaves. They made toilet paper roll trees. They played tic-tac-toe on an enormous vecro wall. Then, the second day was for the flutter-bys. 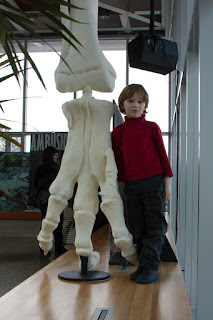 Another stop was the Royal Botanical Gardens, thanks to Aunty Belle, on our way to the train out of town. For some strange off-season reason (which I suspect from what I saw might be significantly gift-shop related), they had dinosaurs. Anyhow, there was also a playground; and we even managed to sneak a visit into the indoor garden where the highlights were the tulips, koi, the pomegranate tree, and a multitude of cacti. Kids seem to love cacti. Their spikes are a strangely irresistible test for little fingers. And while they really probably shouldn't be touching the things so much, it's also pretty irresistible to the adults to just stand back and enjoy the little squeals of pain. (Do not deny it!)

There were triceratops and tyrannosaurus skulls on swivel mounts, fitted with a mirror and lens system, that let you  look through and see something like how they might have seen. There was a wheelbarrow full of dinosaur poo (t-rex's output, per hour, we are told). The now fashionably feathered troodon made an appearance (for which Istra will correct your pronunciation of, whether you ask her to or not, as she did for me). And anyhow, it's always delightful to just stand under the serrated slavering jaws of a huge, multi-story (though still not fully grown?) tyrant lizard and smile for a camera. Say "cheese", Aunty Belle! Don't worry about the stray child apparently to be devoured -- he's so small he'll probably fall out between t-rex's teeth, and possibly even survive enough to receive fanciful facial reconstruction surgery from the good butterfly doctor-artist, as seen above... Yay, science! 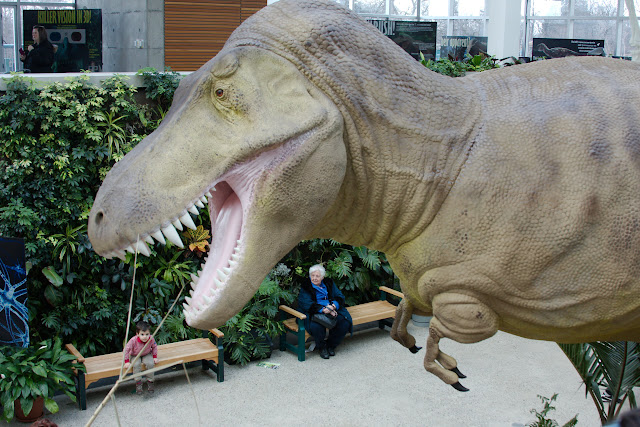