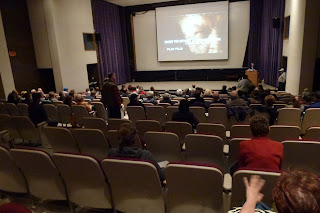 Selena and I attended this documentary screening last night...


Toronto premiere screening of "How to Start a Revolution", an award winning documentary about the life and work of Gene Sharp, Professor Emeritus of political science at the University of Massachusetts Dartmouth, and author of the globally influential manual for non-violent struggle, "From Dictatorship to Democracy". It was pretty good, though didn't go into a lot of depth or follow up.

This photo was taken during the (also pretty good) general discussion afterwards; probably nearly half the attenders had left by this time. The director of the documentary was supposed to be present for Q&A, but had missed his flight.

We had the rare delight of grabbing food from Ghazale on the way. Ghazale is a middle eastern hole in the wall on Bloor street. There's not really any seating, so you get your food and go. We got 4 item veggie "plates". The woman attending us confused our choices, and ended up putting only one fork in the bag (we discovered only after arriving at OISE and unpacking)... so we had to share a fork. Anyhow, I had asked for lentil salad, and some tabbouleh, but what I ended up with was pickled beet salad and tabbouleh (which is actually what Selena ordered). Well, whatever other problems there were with the order, and no matter how awkward it was having to share a fork, this was a magical accident for me. Pickled beet salad mixed with tabbouleh... who would have guessed... magical! Amazing flavour. I want more now....