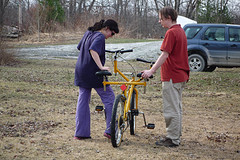 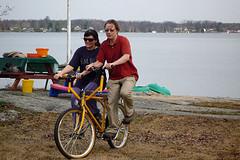 Selena found this crazy bike for sale online some time ago. It's so crazy, we eventually decided to buy it. Strangely, no one had snapped it up yet. We had access to a car on our way up north, so we stopped by the seller's house to take a look at the thing and try it out. Trying it out we discovered Selena was too terrified of the thing to let her feet leave the ground. But she wanted to buy it anyways. So we did! Taking it with us up north we got a few opportunities to practice riding the thing. Selena even managed to get her feet off the ground for maybe half a kilometer (though not without extreme anxiety, and a resultant headache). Whee! So we left the thing up north at Selena's mom's house. We'll have the whole summer to master riding the insane thing, right?

The way the bike works is that one side controls both steering and breaks. The non-steering/breaking side is the passenger side. Both sides pedal.

Doing some research it seems it's pretty common for the first reaction of the "passenger" to be terror. But apparently most people can overcome it fairly quickly. We shall have to see what happens with Selena. (I have suggested she take the driver side, but the thought of that seems to frighten her even more than she already is.)

These bikes (ours being the cheap mass-produced Asian build) were manufactured in the 1980s, but apparently never caught on for some reason.

If you want more pictures of our "buddy bike", here!

I mentioned to Selena that maybe this bike is sort of like that classic trust exercise whereby one person stands in front of the other and lets themselves fall straight backwards, trusting that the person behind will catch them. Selena says: "Oooo, i hate that! I could never do that!" So we may have a few issues to work out. (-;
Posted by T at 19:42