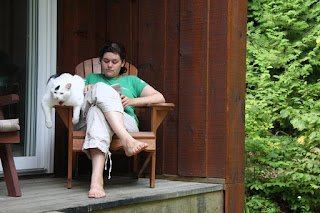 Ah, relaxation. As you can see, we didn't even have to bring our own cat. In fact two cats, a dog, and and even a baby, were all provided by the gracious Sheryl and Richard for our convenience while we stayed in the bunkie next to their cabin in the woods.
The cabin is near Salmon-Trout lake, which is a bit north-east of Bancroft. It is entirely off the grid, being powered entirely by two solar panels. Which leads me to the outhouse! See it there? It's a bit small, and strangely located way up on a post. Not the most convenient thing to access in the middle of the night, but that's part of the charm of rustic country life, right?

Actually, the thing works okay for guys. You just have to stand on your tip-toes a bit and aim really carefully through the door. But honestly I don't know how the women cope with it. Good thing Selena brought her she-wee, is all I can say. And number 2 was certainly a challenge. But that's all part of the fun.Roughing it. Self sufficiency. Zero footprint. All that stuff.

Oh, what? Wait a second. No! That's ridiculous. Selena is trying to tell me that the outhouse was actually up the path, past the guide post a ways. But the only thing I saw up there was some sort of crazily opulent solar powered shrine they built in the bush. Seriously. The stained glass window building, with the weird alter/font, situated nearby? Does that sound like an outhouse to you? Well, I do have pictures of it, so see for yourself.... does this look like any outhouse you've seen before?!

Ah, hmmm. This is embarrassing. Looking a little more closely it does kind of look like a one-holer in the door there. So, that ornate counter thing was... a sink? Not a holy water dispenser? How can that be? The thing is obviously a miracle! It produced water from nothing! Er, rain barrel up the hill hidden behind some trees? You're kidding. But Richard had told me that there were seemingly some interesting "religious" folk tucked away in the hills back there on some of the valley back roads. I thought he was referring probably to himself subtly in the third person, to gage my reaction before inviting me up. Obviously I passed the test, since he did invite us. It doesn't matter much to me what bizarre cult Richard and his family are involved with after all. Did i mention he drives a Matrix? Yes, sure Aunty Belle drives a Matrix too. I'm not suggesting Aunty Belle is in the cult. For some people a Matrix is just a Matrix, after all. Be reasonable! Though it does seem like one of the nicer cults, so maybe Aunty Belle would be interested, now that she's mostly retired from Girl Guides. But you don't think it was just the nice guy front, trying to brainwash us in to their stained-glass-in-the-woods torture chamber organization do you? Thinking back, Richard did refer to the fabulous shed as The Out House. I swear, he said Out House. Not outhouse. You know? OUT house. As in "out there" sort of house. Richard is a man of mystery, after all. He claims to be going to play hockey once or twice a week all through hockey season every year... yet he still appears to have all his teeth. Can you explain that, Ms Rain-barrel-up-the-hill-behind-the-trees?

All right! Okay! Enough. So I'll admit it. I seem to have maybe made a tiny little mistake about the outhouse. Alright, so maybe Sheryl isn't making ritual sacrifices at the custom portable sink with an implement that is cleverly disguised as a toothbrush. Maybe I got a little out of hand. But there are still questions unanswered here. What about the mushrooms in the driveway they experimented on us with? What about that?

Terribly sorry about the confusion, Sheryl and Richard. Let's just forget about this. I'll just insert a random picture from our time up there with you as a palette cleanser and we'll move on. 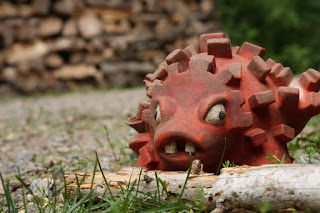 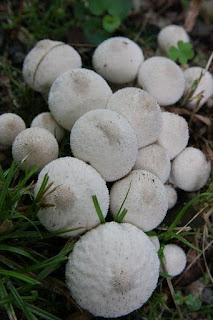 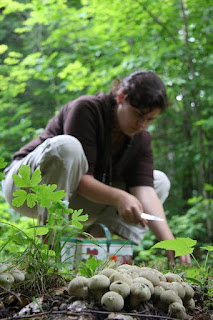 Selena has become somewhat obsessed with the idea of wild mushrooms. It was a rather amazing coincidence that we noticed a large patch of young puffballs growing right on the cabin's driveway (a bit to the side of the tire ruts). While identifying edible wild mushroom's is a notoriously dangerous pursuit, puffballs are one of the most easy to identify species, so Selena got to work on them. Richard and Sheryl and Keagan, who can not be conclusively proven to be members of any sort of death cult, after expressing some perhaps genuine small displays of concern, seemed willing enough to let us go ahead and eat the bounty of their driveway.

Selena was clever, however. She made me eat one raw first, and waited half an hour to see if there seemed to be an undesirable effects, before frying up the rest with zucchini. They were quite delicious actually. At least that's what I remember. They tasted quite mushroomy, but with an extremely creamy texture.

Hey, look at the really nifty stove-top toaster! (I think it may be UFO technology. UFO camping technology.) 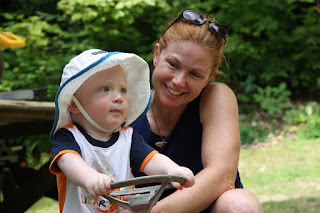 So, apart from a few minor mishaps, we had quite a lot of fun. We swam in the delightfully deep lake. We were amused by Keagan's dancing-dancing-ooo-ooo-ooo! We tramped around the woods and I took many, many pictures of the vast array of different sorts of mushrooms we found growing (but did not eat any of them). We visited the Eagle's Nest, a lookout that towers over Bancroft. We shopped in the Bancroft No Frills, while waiting out some rain. We enjoyed snoozing in the cozy little tin-roofed bunkie loft. We had a really nice bike tour the surrounding roads. (The hills were actually more challenging there than in Algonquin).

A big thanks again to Sheryl and Richard and Keagan and Una and Taana and Nali, the nicests hosts you could possibly imagine, no matter what sort of freaky "out house" cult they are in no way known to be running.

Here is a picture of me trying to take a picture of myself with a spider running around like crazy on my head (excpet you can't actually see the spider when the picture is this small --- use your imaginations! --- it's a big reddish daddy-long-legs!). 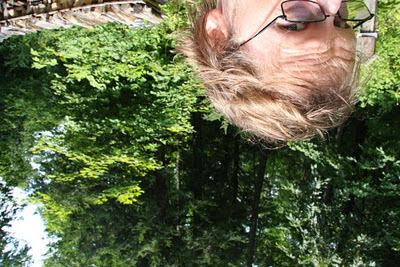 [Note: I wrote much of this rather late at night, after having been in bed sick all day --- I may have dreamed parts of it. Nothing to do with mushrooms though.]
Posted by T at 20:15