Selena and I are back from our little holiday. And the kids are also back from their holiday. Separate holidays. By all accounts we all had good holidays. But alas I have no pictures of the kids, having holidayed separately, so this posting may be a bit boring. Oh well! I may not have kid pictures, but I do have a lot of mushroom pictures! Some may find that they're not that different.

We did a few different things on our holiday. One of them was ride our bikes across Algonquin park. Friends (whom we visited up in that area --- but more on that later) graciously offered to drive us to the west gate of the park, drop us off, and drive back to the east gate and leave a car there for us. It was a extremely gracious offer that we could not refuse.

It's only about 60 km across the park via highway 60, but they are a fairly curvy and hilly 60 km. The driving friends also loaned us all their camping gear so we could make a couple of days of it. We did. We stopped at many of the various places to stop along the highway in there. We took a great detour south 12 km down an old rail trail. Well, before I go on too much, here's a few of the pictures.... 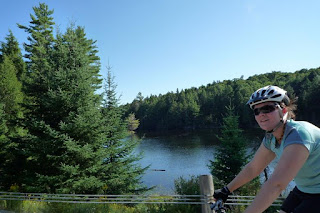 One of the reasons bike riding across Algonquin park is so nice is the generous well-paved shoulder. Oh, and there's the nice scenery as well. 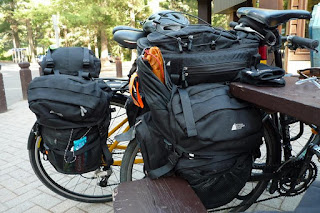 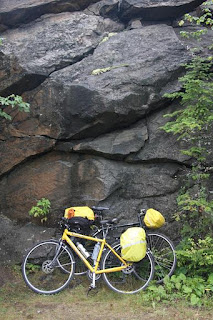 Though we were just staying one night, we had to carry almost as much gear as if we were going to be a week. Tent, sleeping bags, and a bit of other equipment. We didn't take much extra clothing, but did have bathing suits, minimal rain gear, a few odds and ends, and more food than strictly necessary. Even with this fairly basic load (two back panniers, a back rack bag, and a handlebar bag (for camera and GPS), the bike feels quite different to ride. Not unpleasant, but not as nimble as one is used to. 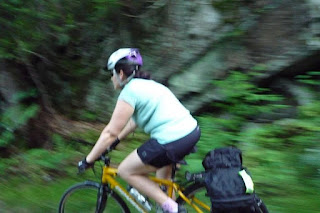 We were going to stop at Mew Lake to camp, but having maybe a few hours of daylight left we decided to go off-road and head south along an old rail trail that leads to the Rock Lake camp ground. Despite the periodic roughness, and a bit of a race against the sun, this turns out to be the nicest leg of the trip. The setting sun lit our trail in golden hues. The trail itself was gorgeous, running beside a wide river for quite a ways. The evening calm making the water like glass, reflecting the trees along the banks. Pictures could not adequately capture this. 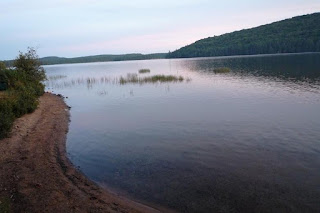 Skipping (for now) the story of the moose that held us up for some time, twilight was upon us by the time we secured a Rock Lake camp site. Our spot was right across from the beach there, which was nice. In our haste to get the tent up while we could still see, we somehow managed to break one of the shock-corded poles. Luckily we had brought some duct tape, and we splinted the pole with a couple of tent pegs. Having overcome this trial, little did we know the really arduous ordeal was still ahead for us that evening: our beer-fuelled neighbours. While the bunch of guys, and apparently visiting gals, did turn off their annoying music at a reasonable hour, they continued to party acapella long into the night. It was sometime after 2 in the morning that they finally started to quiet down, even though the ladies left sometime around midnight. So it goes with camp grounds, sometimes. 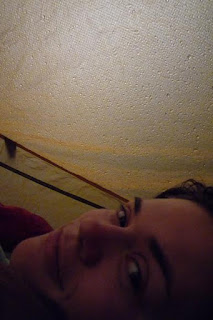 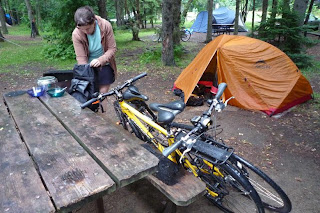 We were woken up early the next morning by pouring rain. It had been raining for a while. We made sure our bags were under the tent fly, and went back to sleep. We'd wake up a while later, and it would still be raining, so we'd just go back to sleep again. It's amazing how much one can sleep when stuck in a tiny tent with nothing else to do. It's sort of fun, even. When the rain slowed to a drizzle we made our way out, had some breakfast, and packed ourselves back up. The noisy neighbours, as we rolled out, stumbled out of their tents with utterances of "Hey, it's all wet out here..." 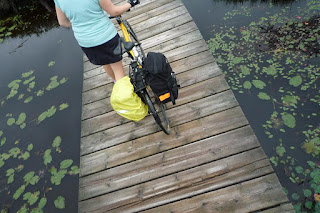 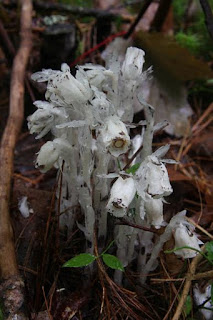 One of the conundrums of cycling through the park, is what to do with our bikes and gear if we wanted to go on any of the many hiking trails which branch off from the road. Bikes are not allowed on most hiking trails. We could lock up our bikes, but would then have to leave all the gear insecurely sitting with them. We'll have to think more about this next time. There was a shortish "bog" walk nearby on the map, and we decided to walk our bikes through it. It was pretty nice. The curious, almost translucent, all white flower in the picture we later found out is called "Indian Pipe". It's a plant that grows in the undergrowth of the florest floor where there is very little light. It has no chlorophyll. Lots of interesting things. 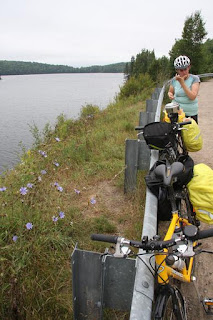 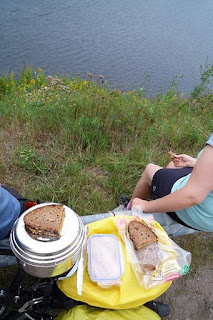 We had a picnic at a lookout on the side of the road for our last lunch of the trip. The backracks on the bike served as our kitchen counter. Yum, PBJs! And not just any old BPJs, but peanut-only peanut butter (of course) on schinkenbrot (sour dough dark rye bread), with carrot marmalade! Sounds a bit weird, but was very tasty and hearty feeling all at once. We also spent some time in the large Visitor's Centre, where many people were crowding the lookout veranda due to a black bear with two cubs wandering in the distance along a river. The bears were so far in the distance that only people with fairly high powered binoculars could actually see them. For the rest of us they were just occasionally discernible little dots, but this did not stop people from standing there for ages watching the idea of those dots. At any rate, it was a very nice view... 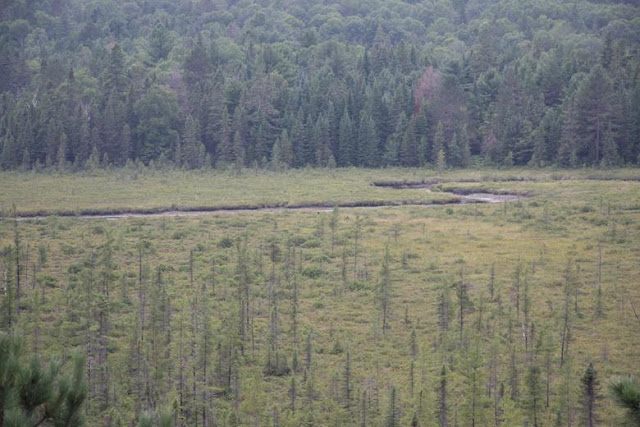 Yes, there are two of the three black dots down there in this picture...! So you also, can stare for hours trying to find them.
Posted by T at 19:16