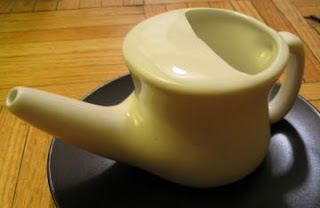 Selena and I have made an odd discovery. And here it is. Looks innocent enough, hey? At least this is our version of it. We didn't have a lot of choice. It was in fact the only one they had at the healthfood store; Selena had to ask about it, and the store keeper had to go digging for it. Strange...

Strange, because in researching these things a bit on the internet I've discovered a whole alternate universe of "neti" which exists. Yes, what you are seeing is not a little tea pot, it is a "neti pot".

You've probably already looked ahead and seen Selena's shocking demonstration. You're probably wondering... what the h***?!!!! What bizarre freakazoid weirdness is she into now?! Or something along similar lines.

Welcome to the wild world of "nasal irrigation"! Jala neti.

It's not as bad as it looks. Not as weird, honest. It just seems completely counter intuitive, doesn't it? Most of our lives we are trying to keep water from going up our noses. Now here is Selena (and I must confess, myself as well) pouring warm slightly salty water into her nose... into one nostril and out the other. Fun. 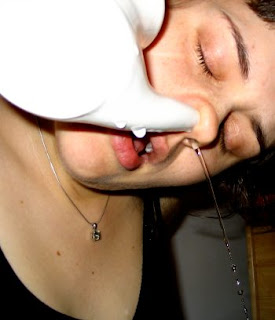 If you check out some of the links above, it will describe the concept in more detail, if you are interested. In short, "neti" is a yoga practice originating from India. The idea simply is, to improve your breathing, by cleansing the nasal passages. And it actually works quite well, and isn't difficult or uncomfortable at all.

When I first read about it, I had to try it. I used a 500 ml water bottle as an experiment. It was interesting; though not optimal as one can't really get the seal around the nostril so a lot of water pours around. The next day we went to the healthfood store to see if we could find a real neti pot...

Selena had more problems than I getting the technique perfected. Probably because her sinuses are so stuffed up (another reason she particularly wanted to try it); and her head angle wasn't right, so the water went through her nose into her mouth (which actually is a more advanced neti technique!)... but she soon figured out the right angle and as you can see is now a pro.

While it seems alien genrally to North Americans, some jala neti sites simply compare the practice to brushing one's teeth (and in fact recommend doing it as part of your teeth brushing and general washing up procedures). It doesn't seem to strange when you think about it like that.

I've been doing it for 3 days now, and it does seem to have a good effect. My nose and nasal passages do feel more open (even though I hadn't noticed them are particularly plugged before). It's not a bad thing.