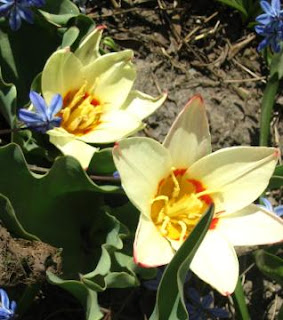 Today Tim and I headed off for yet another midwife appointment and we weren't even late! I attribute that to the fact that I was able to walk at a normal pace all the way to the subway. For some reason lately I have been getting belly cramps whenever I walk quickly; I attribute this to the fact that due to being pregnant and usually hungry, I usually eat just before I leave the house (so I'm not hungry later) and then I walk quickly to the subway which produces those cramps that you get when you exercise too much just after eating. Anyway, today I did not eat before I left because of the promise of lunch at Hey, Good Cookin'! after the appointment.

At our appointment we found out that the student midwife that was working with Katrina has done her final exams and therefore no longer needs to pay any more attention to Katrina's clients; in fact, she may be hightailing it back to her hometown of Sudbury as I type! I was a bit disappointed that she is gone because she was so nice. Katrina warned me, however, that she will probably be getting a new student whose name will probably be Jenny. I'm sure Jenny will be very nice as well.

Anyway, here's some exciting news for those of you awaiting the impending bundle with baited breath--the baby has started to drop. That basically means that the baby is no longer floating around high up in my uterus, but has started to make itself more comfy in the pelvis area. For some people this happens all of a sudden and they actually notice a change in the shape of their bellies, but for me it seems to be happening gradually and I probably won't notice much of anything at all, except near the end when I'll be experiencing all the usual symptoms of late pregnancy, like frequent urination and other goodies. There is, however, more good news concerning the baby's movements and that is that it has started its dropping in the right position. No breech babies for me! Of course it is still early, but it's good that the process has begun with the baby's head down because the more cozy it gets in my pelvis the harder it is for it to move around. 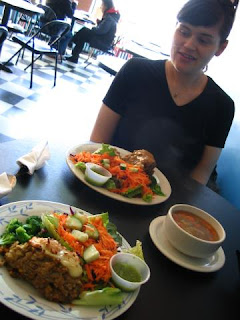 Ok, now for the really exciting stuff! Lunch! Hey, Good Cookin'! turned out to be a cafe type place rather than a restaurant. We had to go up to the counter and order ourselves and then our plates were brought to us wherever we chose to sit. I had a Mushroom Nut Loaf with salad and Tim had a Middle Eastern Baked Kee-something. Neither of us can remember what it was called, but it was like a really large potato stuffed with other veggies, seasoned with curry-type spices and then topped with cheese. Both our dishes came with salad (as you can see in the picture) and we also shared a "Persian Market" soup, which was pleasantly smooth and slightly spicy with lentils, carrots and onions. It was a good lunch, I thought, especially since everything tasted and looked homemade. On our way out we picked up their "Take Out Special" - 6 vegetarian rotis, which Tim was really wanting to try. They are now in our freezer waiting for a hectic day to offer up their convenience! If they are good I was thinking of picking up some more for shortly after the birth, so we can have something quick and easy in the freezer just in case I don't feel like cooking.

That was our day in a nutshell; I am omiting our trip to Triskelion where we did not buy any books and our trip to Loblaws on the way home. I will also omit the horror of the arrival of the abrasively musical ice cream truck, which has happened at approximately 8pm for the past three days. If this keeps up, Tim is going to make the ears of those child-seducing racketeers bleed to Norma Jean. The ice cream truck doesn't stand a chance, but we may get evicted in the process.