Flashlight vs Alien (It doesn't even blink...)


Well that turned out to be rather an ordeal... but we got a picture out of it, so that's okay. Ladies and gentlemen, allow me (since Selena is out practising her Russian) to introduce you to.... It! 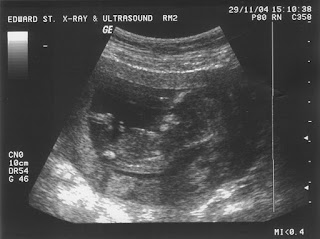 There you have it. Er... so to speak. The picture turned out fairly well I think, compared to some I've seen posted indiscriminately on the obsessive pregnancy-related web boards Selena tends to hang out on these days. Oh my! Am I already proclaiming mine is the cutest and most photogenic of all relatively newly produced fleshy blobs? AhhhhhHHH!!!! Oh no!!!

No, just kidding. It just seems the image has a little more recognisable shape than some I've seen. You can actually see spine (i think?). (That's the head on the right, and knee/leg bent up on the left; in case I'm completely deluded and you have no idea what's what for looking.) We are told it's normal size, appearing normal, and generally apparently normal. We await results of Selena's blood work.

There's no possibility of our knowing gender for at least 5 more weeks. (The ultrasound scan width reports itself to be 10 centimeters -- and the image above is slightly cropped at the sides... so it a bit less than that.)

The place we went was absolutely packed with people. So much so that we had to stand, there were no more seats in the waiting room. Selena realised she'd forgotten her health card as we entered, and almost turned around and left. Then when asking at the desk, it seems Midwives Collective apparently hadn't faxed all of the forms they were supposed to. But nevertheless, after much waiting (Selena eventually got a seat) and confusion... you can see the results above. (And i won't bore you further with more waiting, and missing forms, when we went upstairs to try to get rid of some of Selena's blood.)

Little do we know, for that matter.