It's been just over a week since then dog moved in.  We all continue our adjustments, but already much has changed... 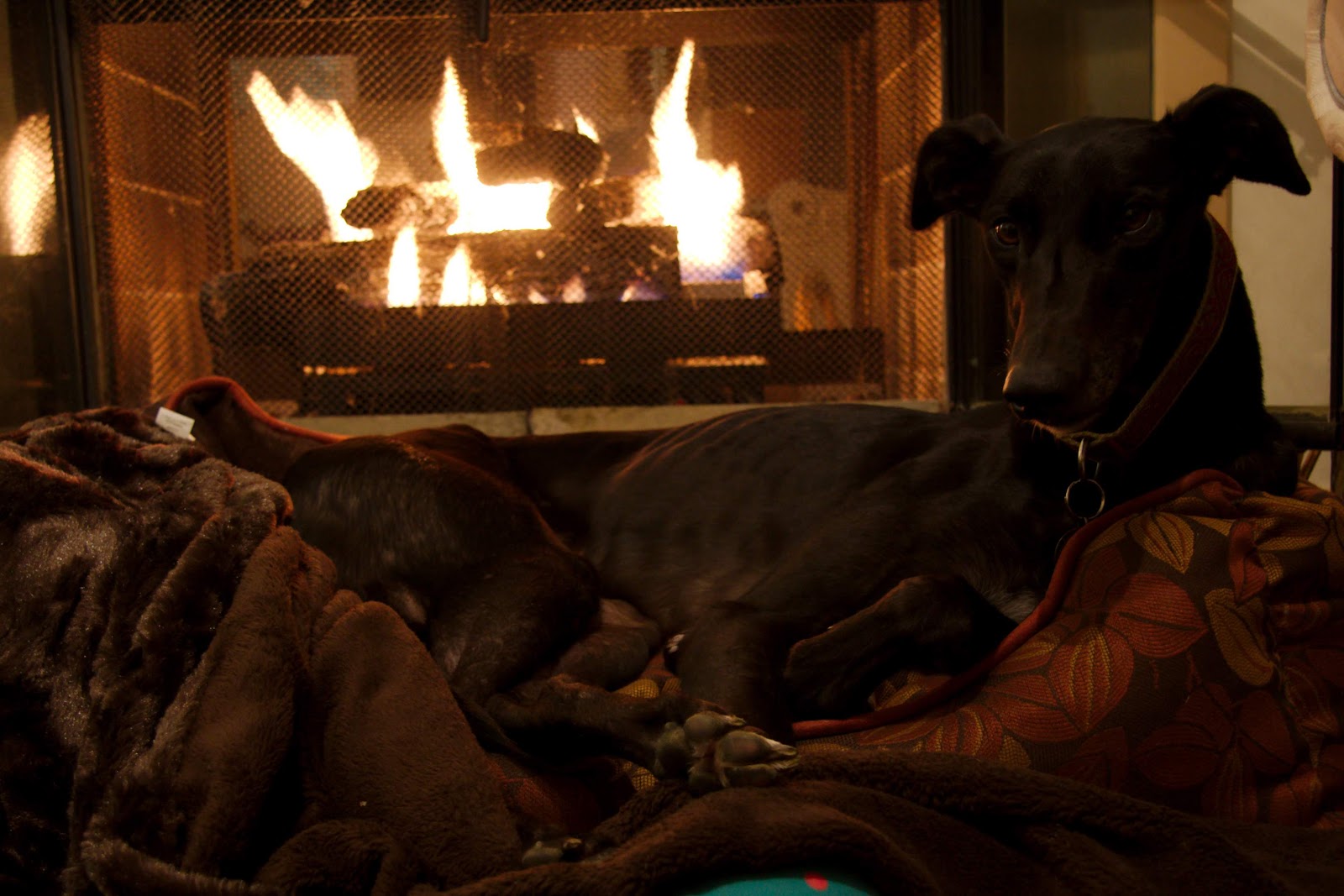 A week plus a day later, Valkyrie  finally figured out how to utilize her fancy dog bed. That is, she figured out she could actually lie on it. Up until now, since she started venturing from her crate, she has insisted on lying down beside the thing. But now, having discovered the wonders of plushness, she is seldom found anywhere else other than curled up in the dog bed. If the fire is going, it's sometimes hard to coax her from her warm, comfy coma, even to go outside for a walk.

On her second day (Sunday) after the dog arrived (Friday), though still mostly staying in her crate, it seemed she was getting a bit more restless. We decided to take her to the pet store and see if there were some toys that might interest her. It was a new experience for everyone getting her into the back of the car with the back seats up and occupied (by the kids), but we all survived. And Valkyrie seemed to really like seeing and smelling other dogs at the pet store. "Hurray, there are still dogs in the world! I'm not exiled entirely into a human-only wasteland!" Partly due to this, we decided to check out a dog park nearby (Costco and the pet store) that Selena'd heard of. It was great -- big, big meadow with paths through it. It deserves, and probably will get, a post of its own in the future. Anyhow, we didn't let Valkyrie off leash, of course. But we walked around, and she happily met a bunch more dogs, including another greyhound who happened to be there.

On the third day (Monday) after arriving, having still stayed in her crate (with open door) most of the time (as described in the previous post), Valkyrie finally started to get more used to things around here and venturing out to sniff around. After taking that huge step, she started to grow more confident. In fact, the pendulum has at times seems like it has swung too far to the opposite extreme! We almost long for the days where she wouldn't come out of her crate! (But not really.) It's been a bit like having a three year old wandering around, with teeth. She's been getting in to lots of things. Istra, again, has been especially outraged on two more occasions. One evening she was fooling around at dinner and left her place at the table, and the dog walked by and gave her plate a good lick. Yum, spaghetti sauce! On another afternoon the dog nosed into a bag Istra had left on the couch and found and half ate a candy a friend had given Istra at school. The drama has been intense. 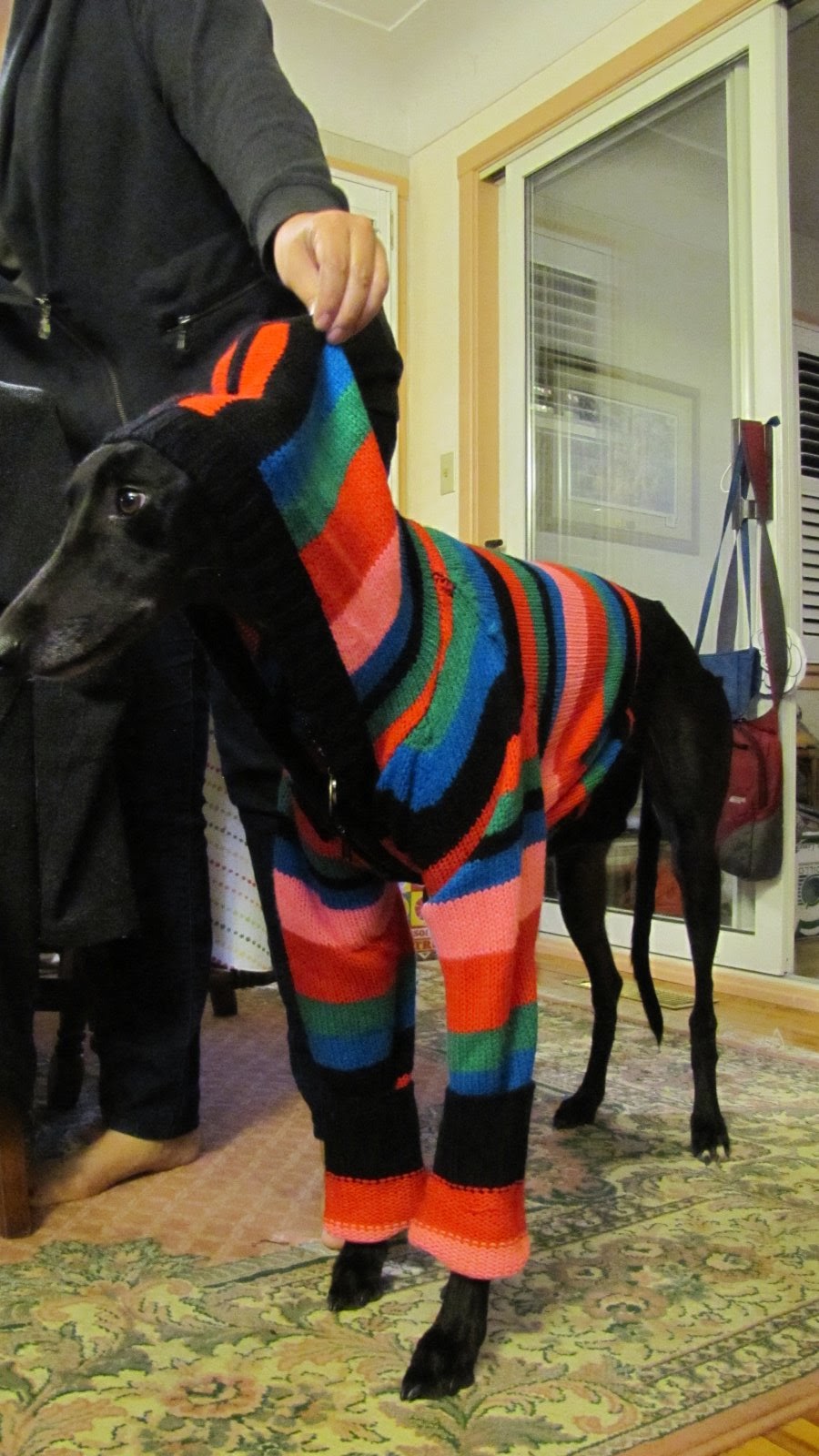 As of day four, Valkyrie had pretty much mastered the stairs in and out of the house, both down and up. A little clumsy and spastic at times, but usually without any more fear and hesitation.

Also around this time Selena started trying to dress her up! (She's attempting to convert an old sweater into a doggie sweater. Pictured is an early test fitting. The idea is that Valkryie may wear this sweater under her actual dog coat when the weather is colder. Greyhound skin and fur is very thin, and body fat is nearly non-existent, so they need lots of help in the thermal insulation department.)

Another problem with her growing confidence, however, has been that she has also shed her fear and caution of the cat. She is in fact extremely curious about the noisy little creature. And the cat is not at all pleased about this. And it's worried us a bit also. The cat has taken to staying in the basement most of the time, these days. So a new program to try to get them used to each other has begun. We have blocked off a few rooms in such a way that the cat can access but the dog can not. The cat still prefers to stay far away in the basement -- the dog can't get down there at all (even if she could manage the stairs, she would have to get through the kitchen to get to them, and she is not allowed in the kitchen). When we are around to keep an eye on things, we bring the cat up and close the basement door, to try to enforce some approximate proximity time. We still muzzle the dog when we feel the need. We have seen some improvement. The dog seems less fixated than she was when the cat is near or noisy, and more willing to give us her attention when we distract her. And the cat has crept out of the safety zones a few times to see where the dog is. 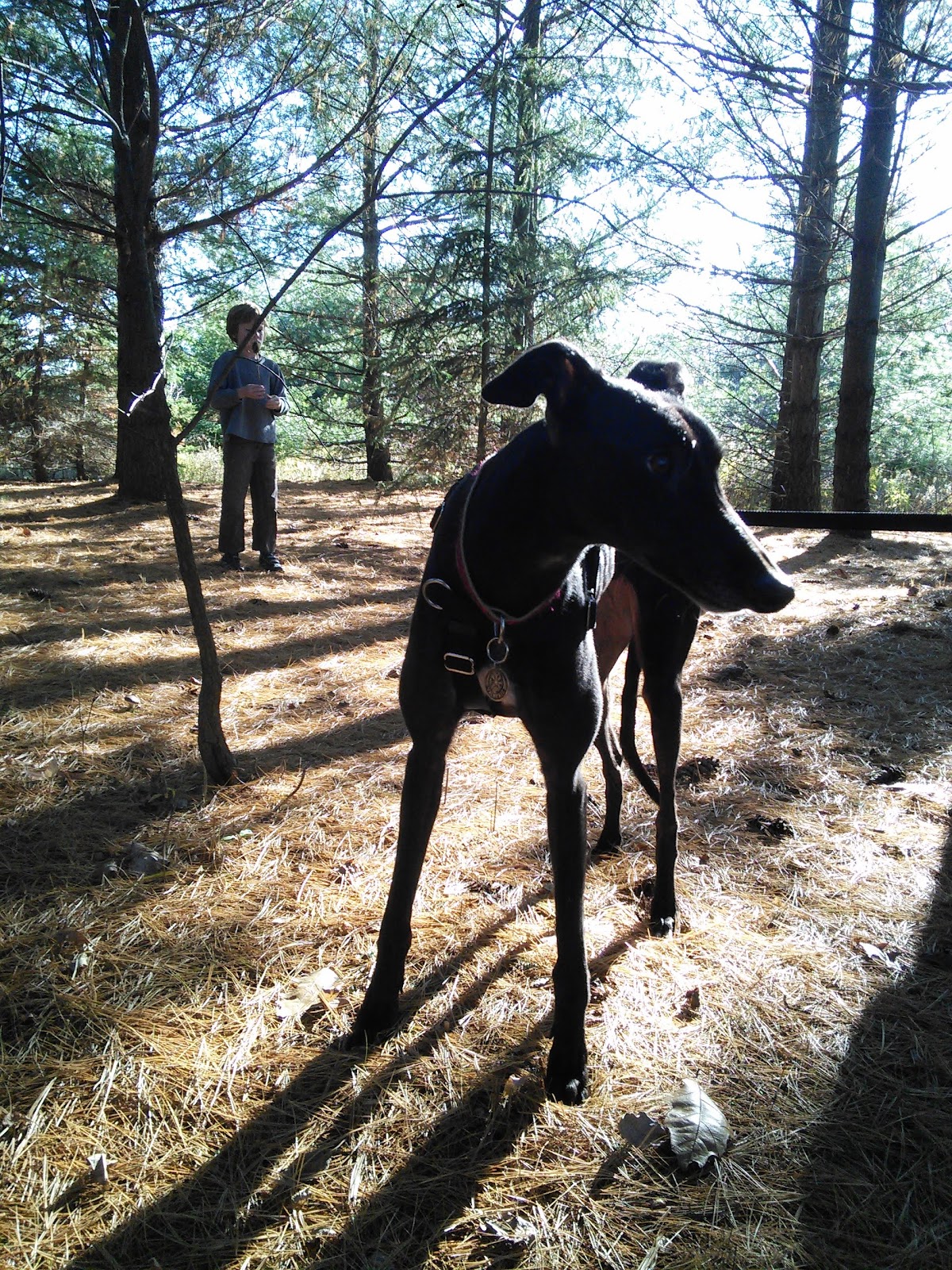 By about the fifth day, Valkyrie has apparently grown attached to us enough that she is no longer tolerating staying in her crate all night. She's reluctant to go in the crate at all anymore, in fact. But she does go in when encouraged. However, she increasingly has started howling (or "rooing" as they call it with greyhounds) in the middle of the night, and showing signs of separation anxiety. The first few nights this happened, Selena came up (our room is in the basement) and slept on the couch, which quieted things down.

Apparently ex-racer greyhounds, when removed from their life-long environment of being surrounded by other dogs all the time, become extra dependant on the company of their adopted people. So, while when she first moved in with us we were looking for her to come out of her crate and be with us, now already she seems hardly able to tolerate being away from us for long without getting quite anxious. Ironically we are going to have to work on getting her used to being alone again. However, we don't want to stress her out over this at the moment, which can lead to other behavioural (or even health) problems. Everything has to be gradual... it is still early days.