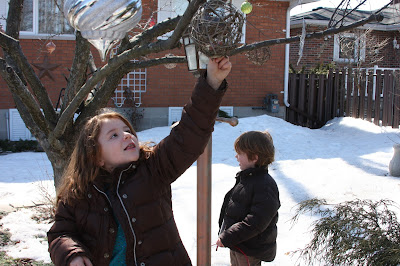 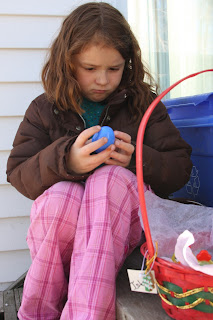 "This is the worst Easter ever!!!"

What? It turns out we have Easter Egg thieves around here. We could hardly believe it, ourselves. The first hint was when Auntie Belle noticed something odd in the backyard carrying off a colourful thing...

A little later, after hunting for some time back there, the kids only managed to come up with 3 of the expected 12 hollow plastic eggs that the Easter Grammie had "dropped". So the Easter Grammie herself went to help find the bright and elusive spheroids. But they were gone! Obviously stolen.

It seems within the hour between the placing and the hunting, squirrels had run off with 75% of the candy. (Though the squirrels only got one of the six bigger bigger candy-filled chicks which were eventually found.)

Istra's going to take a while to get over this harsh betrayal by nature. 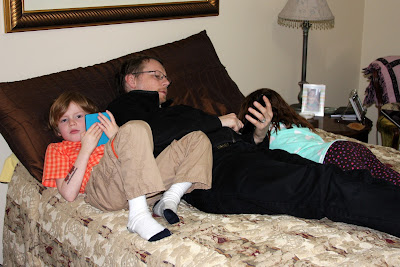 Grammie had more Easter surprises up her sleeve this year. The next day she revealed two little (5") e-readers she got the kids.

So now we all have our own ereaders. And here we are enjoying our ebook readers together. (Emeth sporting his spiffy new Easter orange shirt & zip-off pants from Aunty Belle.)

Emeth is reading "HippoSPOTamus". Istra's into "A Prince for a Princess". (And I'm afraid I'm deep in the middle of this old thing in the picture---which sadly is still quite relevant, though written in 1894, and now finding itself on an ereader.)

Here's the kids' Easter message for everyone, as found scrawled on the driveway... 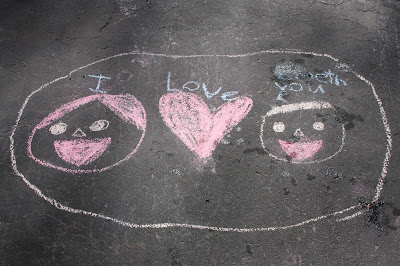