We went to check out Ajax's winterfest today. Not the biggest event in the world, but it was something. 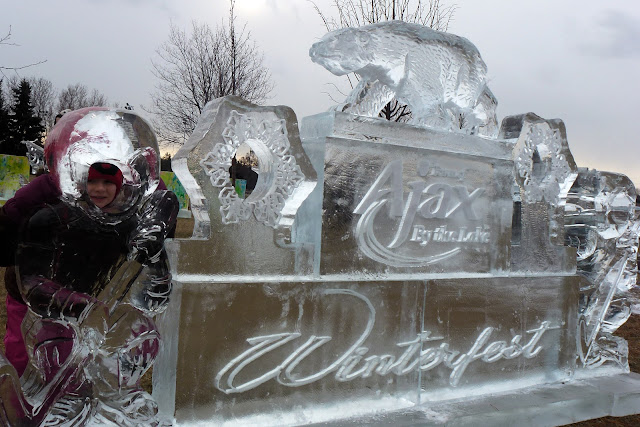 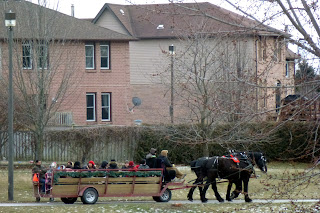 There were horse drawn wagon rides. I found it amusing to watch the noble beasts pulling loads of suburban folks past walls of suburban landscape. The horses didn't care. And the kids liked it. They are in the wagon, with mom, here pictured (near the front). 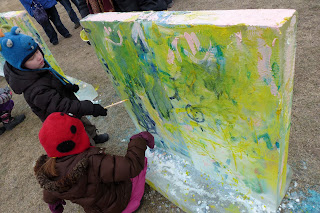 Ice painting was a neat idea; though by the time we got to it the ice was pretty well already covered, and there wasn't much paint left. What paint we had then quickly started to freeze up in the cup. No matter, the bristles on the paint soaked paintbrushes were pretty completely frozen solid already also. 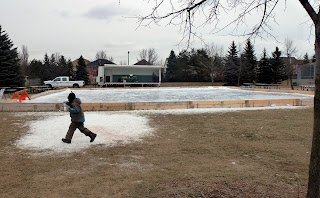 But the funniest thing of all was that for some unknown reason the people in charge of the skating rink decided not to flood the thing the night before, so the winterfest ice was unskatable. Behind the empty ice rink you see the DJ stage. The DJ dutifully (stuffed in his parka) pumped out tunes all afternoon... to the desolate rink.

Besides this, and other things, there was an impressive array of bouncy castles. Istra went in one, but came back out in surprisingly short time. You see, you have to take off your footwear to go into bouncy castles. Istra said her feet were freezing. Inside the community center there was a craft area for the kids. The craft of the day was mounted snowflakes. For some reason both Istra and Emeth refused to do crafts, so we just sat in the library there and read a few stories to warm up.

There was also a little "lumberjack" show, with axes and chain saws. It turned out that where we ended up watching was exactly where when the guy came to do the chainsaw carving -- making those little chainsawed chairs out of a log -- he had his back to us. So for the chainsaw carving we mostly saw a bunch of buffalo plaid, with sawdust whirling out around it.

It was all good though. We stopped and got some crunchy cheese snacks on the way home.

(Click the link in the first sentence for a few more pics, if desired.)