Sled dog me, and not even the Alpha...

I've discovered in the last few days that it can be actually somewhat difficult to handle a camera, while managing two largish dogs and two maniacal kids... especially while traversing significant quantities of snow. So, luckily, my mom was visiting, with her little camera, and we got some pics of the day's outdoor shenanigans... 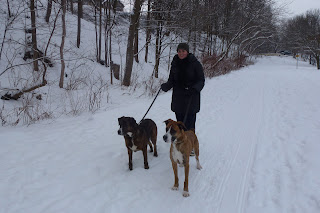 It started like this... A nice normal dog walk. Here you see Selena sporting the around-the-waist double-leash rig often used with these dogs. (The leashes she is holding, for more of an illusion of control, are actually both attached to a strap around her waist.) 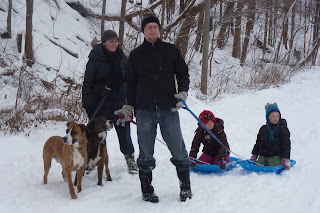 Now, once again, it appears Selena is doing all the work. So what am I whining about, with my excuses for not producing more pictures? Well... it turns out I've ended up with a rig of my own... The main difference being while Selena's rig's twin-engines pull for her (albeit sometimes too much, and often in different directions), in my situation I'm a single engine pulling two giggling dead-weight (or worse) slave drivers. 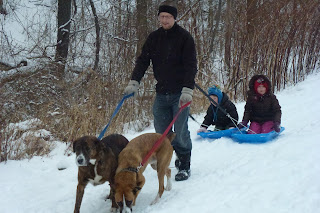 Today we had the idea (we? actually it was Selena's idea) to combine the rigs. We ended up with what you see here... It worked pretty well, actually. At least, sometimes. But we (yes, actually Selena again) thought we could do better.... 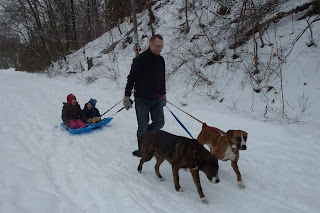 And thus, version two of the urban dog-sled rig... and, as you can see, I now am (mostly) hands-free! Hands-free, trapped in the middle of crazy! I am a human dog-sled dog; and I'm not even the alpha dog! So it goes. It was pretty fun though, and really was a lot easier to pull the kids -- especially when actually running. At least when the dogs would go relatively straight, and not get other ideas.

Of course, we didn't really want the dogs pulling too hard against their neck collars. But they tend to pull against them anyhow, so why not take advantage of it a bit? I guess the next step is a full-on dog-sled harness system. And me, no doubt, on all fours...

And whips for the children to snap. 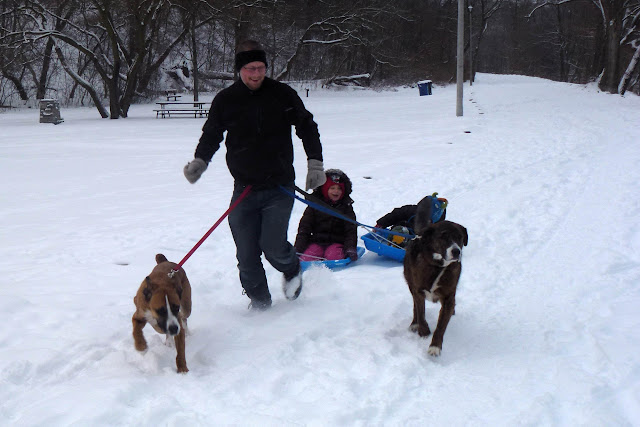 Not enough pictures of this yet?! Here they all are.