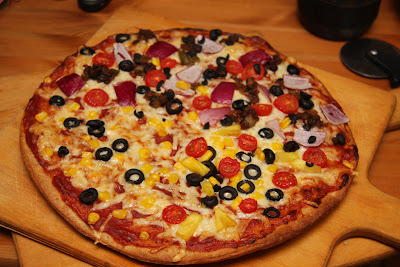 Tired (oh, so tired) of Emeth's incessant rejection of my beautiful pizzas as "disgusting", I one day had the brilliant idea of getting him to put whatever he wanted on his (stupid) pizza. After a long and exhaustive search for toppings we finally found one he was willing to tolerate. Corn.Yes, corn. Just corn. He was even excited to have his very own corn pizza. Istra, always fearing someone else might get something good, then requested corn also. And so a tradition was born.

Now when I make pizzas, we end up with a pizza that looks like the one seen here. I let the kids top a quarter each with whatever toppings they want. Emeth always wants corn. (This time he also allowed a few black olives.) Istra, slightly more liberal, added pineapple and tomatoes to her olives and corn. The other half of the pizza has no corn! (Because, honestly, that's disgusting! Though a few stray kernels sometimes horrifyingly do stray across the boundary line...)

Anyhow, Emeth actually eats his corn pizza, and does not complain about pizza (as much) anymore. So, it's all good.

Just in case you're curious, the meat-like topping on the "adult" side of the pizza is actually some globs of left-over taco filling (made from Yves "ground round", lentils & seasonings). Sounds a bit strange, but worked extremely well. Taco pizza!