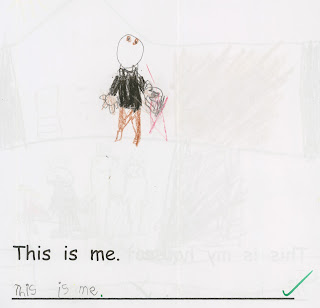 He really has a different "style" of drawing than any other kid I've seen. He really doesn't like to draw much. This may be partly due to the awkward way he continues to hold his pencils with his left hand (though we continue to try to encourage him to hold it in more practical ways). This may lead to the amazingly minimalist style he continues to employ, which amuses me so much. Given a page to draw something on, most of the time at least half of the finished product will be white space, with small, somewhat meticulous figures. And so, here is Emeth's senior kindergarten self portrait. He has no nose or mouth. But he does have fingers, and apparently is a sharp dresser. 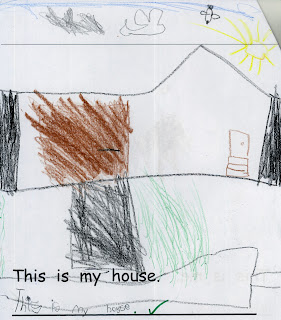 As crazy as this full page drawing is, it really is an amazingly accurate representation of the front view of the townhouse here. Not quite your standard house shape. I"m particularly amused that he drew the steps in under the door. 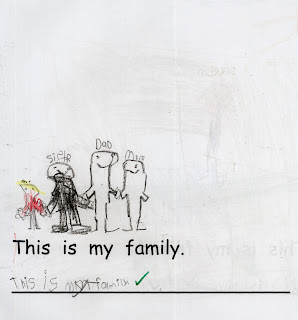 Back to minimalism. It's interesting how the picture becomes more minimalist as you go from left (himself) to right (parents). Apparently he's the only one with colour in the family. The almost single-line cartoons of myself and Selena are pretty fascinating! We've never seen him use that weird single-line style before. 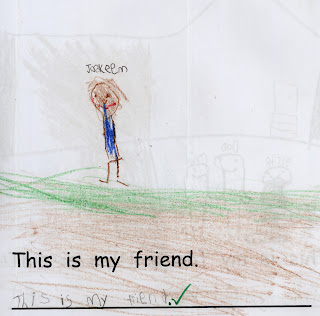 The odd thing about this picture is that Joaquim is actually a friend of Istra's from years ago, who we haven't seen in a long time.His family moved to BC last year, and we didn't even see him very often for years before that. Emeth doesn't really have any friends himself yet, so he seems to consistently use Joaquim has his embodiment of the concept of friend -- perhaps due to him being the person he most often heard referred to as a friend when he was learning to talk.

You can see the minecraft influence (probably) in the way he draws dirt underneath the thin layer of grass. 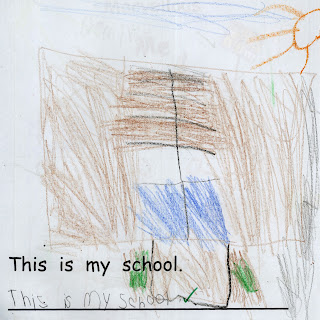 While it looks like a bit of a mess, this is quite recognizable by me (and really quite proportionally accurate) as the front entrance of Emeth's school. The kindergarten has it's own entrance on the side of the school, so Emeth never uses this entrance. And yet apparently when he thinks of his school, he sees in his mind the front blue, windowed, doors and the garden-edged walkway to them. 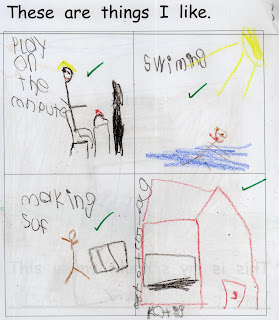 Suddenly, stick men! I guess with so many squares to fill he he felt he had to get even more minimalist! Naturally the computer comes first. It's awesome the way he choses the profile view of sitting at the desk, with the monitor somehow strangely set up behind. Is that blood on the keyboard?! Or perhaps it's the glow from the optical mouse.

I love the feel of the little scribble of water for swimming in. (Though I'm surprised to see it as a thing that came to his mind as liking. He only got into a few times in the summer, and was constantly anxious about the weeds in the lake.)

I'm not sure what the "stuff" is that he is making.

Actually the first thing I immediately recognized when looking at this page was the drawing of the cottage (even though he has the big window on the wrong side). What else could it be? And quasi-3d, no less! It's certainly easier to recognize than read the label beneath it. But speaking of writing, I was amazed to see the vertical text there. We've never seen him write like that before.