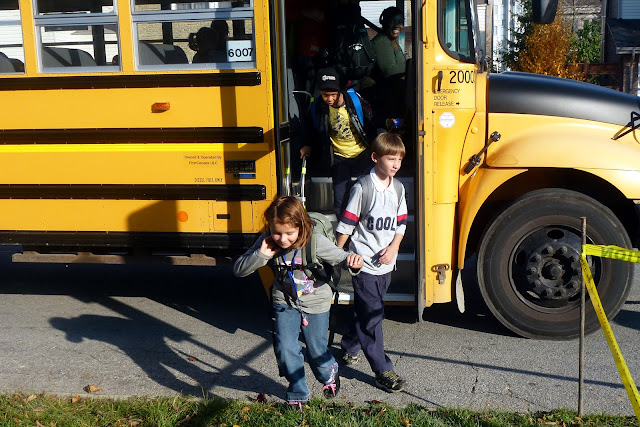 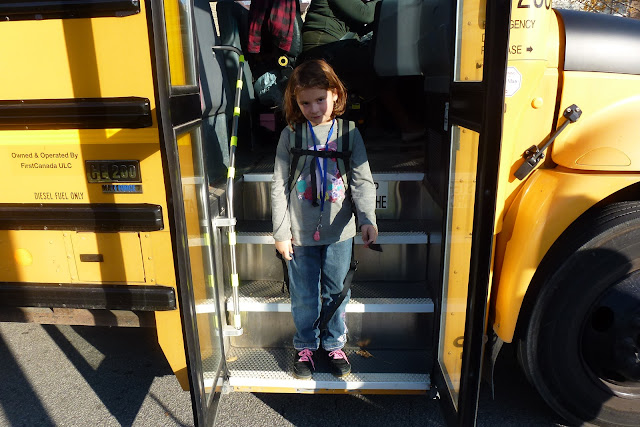 Conquering her fears (especially after the mix up on her first attempt last Friday), Istra managed to make it home on the school bus for the first time today. On Friday, for her first time, Selena and I met her after school and went with her to the bus to reassure her and make sure she got on the right one. While helping "motivate" her up the bus steps, I mentioned to the bus driver that she was particularly nervous, because it was her first time. The bus driver asked her name and where she got off. Everything seemed good. Selena and I jumped back on our bikes to race the bus home to meet Istra at the other end. On our way to the bus stop, Selena wanted to run in to take off her coat (or something). While inside the phone rang, and it was the school. They said they had Istra in the office there. What?!!! But we put her on the bus ourselves! There was much confusion, no one seemed to know what was happening. We figured maybe Istra panicked and got off. Going back to the school to pick Istra up didn't add much clarity. The secretary said that she came back in because she was on the wrong bus; but this made no sense because we were absolutely certain we put her on the right bus, and had even talked to the bus driver. Anyhow on the way home Istra finally revealed that the bus driver had checked a list before leaving and said Istra was not on the list so had told her she had to get off and go to the office. So anyhow, this morning we verified with the morning bus driver (she takes a different bus in the morning) that Istra was definitely on her list. So today I went to meet Istra after school again to be extra, extra, extra sure she was on the right afternoon bus. It was the right bus. The bus driver recognized us approaching and told me right away that it was the wrong bus. I showed her the print out the school had given us which has the bus number on it. The driver insisted that Istra wasn't on her list. I explained that she was on the list of the morning bus. At this point one of the other girls on the bus piped up and confirmed that she'd seen Istra on the morning bus. The driver asked her what stop she got off at, because she didn't recognize the stop as it was on the print-out the school gave us. The girl explained that she got on at a different stop than Istra, but Istra was definitely on her bus. At that point an observant boy came forward and asserted to the driver that Istra got on at his stop. (The very boy that can be seen getting off just behind Istra in the first picture.) So he told the driver his stop name, and the driver scowered her lists again... and ... then... all of a sudden... yes, there's Istra on the list! No idea how it was missed before. But in a blink everything was suddenly all sorted.

I raced home to meet the bus. Gramma decided that she needed to come too, and bring a camera to immortalize this momentous occasion (as can be seen gloriously above), so everyone can share this magic moment.

And here's mommy, in grade 1 (or 2?), also immortalized waiting for her school bus, with Aunty Whitney. They are waving. (The bus is sneaking up from behind a mailbox.) But where are their classic Rainbow Bright and Fraggle Rock lunch boxes?! 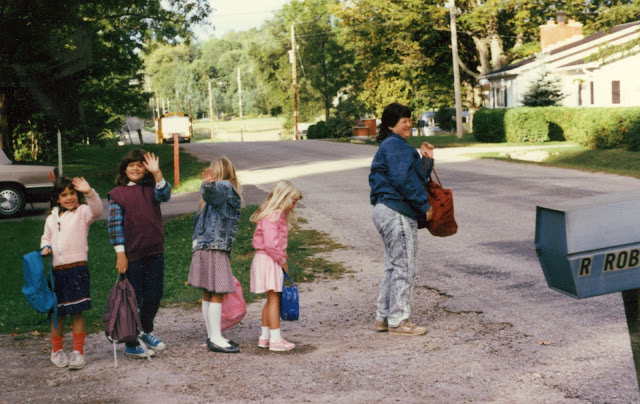 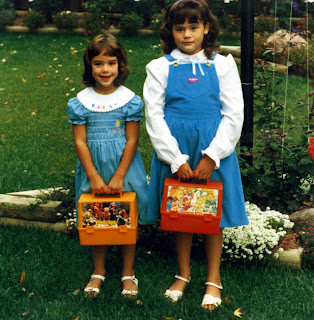