Keeping track of the books... 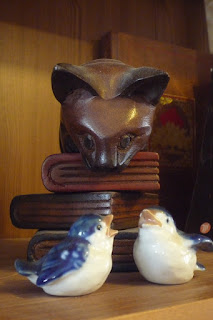 For some time I've been keeping track of the books I've read on a site called Goodreads (which I seem to be doing a lot of, particularly lately). Recently Selena has joined me over there. More recently still, we decided to hook the kids up. They were interested in rating their books, too.

It's kind of interesting to us to see how they rate things: both the ratings they give, and the process of them deciding on a rating. It's hard to tell what goes through their brains, to bring them to their judgements. Of course, they have a somewhat generous tendency towards "amazing", but I've been surprised at how nuanced they can sometimes be with their stars.

Anyhow, as an easier way to keep an eye on things for myself (not unlike the cat in the picture), I've created a new page on this site (with a link over on the side), that displays the most recently read books for all of us. If you're curious, feel free to have a look at our Family Reading.

(Goodreads also has an interesting recommendation system, where based on your rated books it suggests other books you might be interested in. It's not the most accurate thing in the world; but it's interesting to see how Istra and Emeth's recommendation pages have already diverged based on their rating, despite having read quite a bit of the same books.)