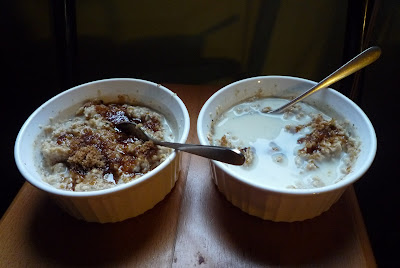 Yes, I'm going to write about our morning porridge. Or, I should say, the kids' morning porridge. This is their default with which they break their fast the vast majority of mornings, ever since they were weaned. I just want to record these details, even if they are rather mundane, as one day they may be looked back upon with nostalgia. It is possible!

Anyow, it's nice that they like porridge so much, and ask for it, because it sure makes things easy. It's relatively inexpensive, and, as a bonus, it's rather on the healthy side of things, too.

We usually use organic quick oats. To suppliment we sneakily add approximately a table spoon of wheat germ, and a table spoon of hemp hearts (shelled hemp seeds). These mix in and aren't really noticed, but boost the nutrition. We put the grain mixture into individual bowls, add a bit of milk, and pop them in the microwave for a couple of minutes. After they come out, we customize further. Istra likes to have some raisins added, Emeth currently does not. Emeth likes to have his extra milk mixed in, Istra does not. Istra likes to have her sugar mixed in (I just put it on top, and let her mix it in), Emeth freaks out if the sugar is not visible sitting on top of the porridge. Sometimes we use maple syrup instead of sugar if we have enough of it on hand.

In the picture above, the porridge on the left is Emeth's, and Istra's is on the right. It's important not to mix them up!

We used to sometimes add crushed nuts of various kinds, but the kids don't want the nuts these days; maybe in the future we'll experiment with adding more things again.