Half of Halloween and a Half

This is what sort of awesome parents we are: we forgot it was Halloween today. Or at least I forgot it, and no one reminded me. Walking the kids to school this morning, Istra suddenly says to me, "Isn't today the day we're supposed to bring our costume?"

Ah!!! I hope not? We begin to notice more and more kids with suspiciously weird looking appendages and accouterments poking from beneath their capes and balancing on their skulls. Hmmmm.

"Okay," I flounder, "After I drop you guys off I'll run  home and get your costumes and bring them to the school." (It certainly won't be the first time I've had to run home to get something we'd forgotten.)

Their costumes this year are again the same cheap store-bought suits we picked up second hand at Goodwill years ago. (See first phrase of this post again for a commentary on that.) This is what they wanted and had been talking about wearing all last week: Istra as the wingèd rainbow unicorn, and Emeth the Dinosaur (or Dragon, depending on his mood). Actually the unicorn was Istra's costume from two  years ago, and she donned the fuzzy reptilian skin last year (while Emeth reprised his Lion role). It still fits, sort of. Anyhow, these cheesy costumes (which they actually do play with sometimes even when its not Halloween), hang seemingly perpetually conveniently in the far end of their closet.

Except today the unicorn. Not today. No unicorn?! The one day its needed!

Desperate, grasping at straws, I phoned my  mom to see if she'd seen it when cleaning up the kids room some weeks ago. I managed to reach her in the middle of some forest. She was out on a group hike. She said, of course, that it was in the closet. It was not in the closet. I look yet again, because I can hardly believe it either. I again check the floor of the closet, the top of the closet, all the boxes in the closet, under the kids' beds, in their drawers, on their beds, beside their beds, in all the other closets, behind all doors, everywhere. And again. No joy.

Running out of time, it seems the only option is to use what we do have. We have the dinosaur. And we have Emeth's lion jacket from last year (looking pretty small, now). I shove these in a bag, hoping (though somehow sure it's not going to work out) I can convince Istra to accept the Dino, and Emeth the Lion.

I deposit the lion jacket at Emeth's daycare cubby hook, and meet Istra as she's coming out for lunch. She's rather despondent at seeing the dinosaur. We decide the unicorn really must be magic, the way it disappeared. That cheers her up to think of, but doesn't solve anything. She refuses to wear the dinosaur. Maybe she'll warm up to the idea, getting used to it over lunch.

I walk down with her to the lunch room (the gym), but she wants me to stay. I hadn't planned on this. I didn't bring a lunch. But I offered to go outside and have a picnic with her, anyhow. This actually turned out quite nice. We sat at the picnic tables in the front of the school. The weather was lovely. Sunny and cool. Quality time.

Istra was pleased to be away from the gym because she said this way she'd have enough time to eat her lunch. She always (when asked about how much of her lunch she did not consume) complains about not having enough time to eat her lunch. We figure she fools around with her friends rather than eating. But actually, being there, it really did seem like a relatively short time when the bell rang, and Istra told me that that would be the bell for her to go outside for "lunch recess". She says "lunch recess" is very long. We lingered past the bell, but when she seemed to lose interest in eating I asked if she wanted to go play with her friends. (After one small nibble at her cheese sandwich, she had eaten her apple. Then she returned to her sandwich, and ate half of it -- leaving copious amounts around the crust --, and a bit of the other half. She made no move for the carrot sticks, until I asked if I could have a couple of them. Once the container was opened, and I took one... she grabbed several and commented on what good carrots they are, munching happily. Often, apparently without me there to open the container, the carrots come home untouched.)

Around the back of the school, instead of going to play with her friends, it turned out that Istra just hung out with me. She dragged me around showing me everything: how they plant trees (harvesting acorns), the sidewalk she's not allowed to go past, how she can leap from a pedestal and swing on the railing of one of the play structures. She showed me how she climbs up to the top of the play house wall. I asked her if she gets in trouble for doing that. She says, she only gets in trouble from "that teacher"... she points to the yard duty teacher who is just then passing by not much more than a metre away and repeats, pointing, "THAT TEACHER". Uh. Okay, maybe you should get down, then, I try to say quietly so as not to attract attention. Istra says she's going to jump. This looks scary even to me! She's squatting around 5 feet off the ground. And she jumps. The landing is hard, and she falls forward. But she gets up unhurt, and says that that wasn't as good a jump as she usually does. Uh... okaayyyyy.

Anyhow, at long last the bell rings to go back inside (lunch recess really is long! -- they should let the kids eat longer). Upstairs I find Emeth sitting by his kindergarten cubby. He has not brought up his lion jacket. This doesn't bode well. I ask Istra if she's warming up to the idea of wearing the dino suit. I helpfully offer that maybe the unicorn used magic to disguise itself as a dragon. No go. She refuses to wear the dino suit. She says coolly that it's okay, she'll just not wear anything. It seems slightly sad; but not the end of the world. This refusal being definite I offer the dino suit back to the lion-refusing kid across the hall. He also refuses it, saying he doesn't want to wear anything.

Until the last second. Emeth then finally muetters in his pouty capitulating voice... "okay, I'll wear it." I have to back and make sure Istra hasn't changed her mind, to confirm the suit is still available. Istra explains to me the problem with it is that last year she found the feet too floppy, and so she doesn't want to wear it ever again. That's her big problem?!! Pure Istra. Okay. So over to Eme it goes. I bustle him into thing, as the rest of his class is lining up for the Halloween parade....

After assembling in the gym, all the kids headed out to the back field to parade around. Istra, hanging out with a scarecrow (Kidan's cute homemade-looking costume), wandered around costumeless, and seeming not at all notice or to care. Emeth marched with this class as if in a funeral. He shuffled along, looking at his feet. (And the feet didn't look overly floppy to me!) I have no idea what was going through his head. He's still uncomfortable with most things that are unusual, especially in public, it seems. (I'd had a bit of a struggle getting him to go into his daycare class in the morning: he was rather nervous of his teachers, one of whom was dressed up like a blue crayon, and the other as a pumpkin.) The principal was handing out suckers at the end of the parade... so at least hopefully that made the ordeal worth it!

But anyhow... after all that, I finally got to go home for an hour before having to go back to pick them up. I got home and found an email from Selena, responding to my plea for help regarding the unicorn... the thing is hanging on the back of the bathroom door, she simply says.

Sigh! I was pretty sure I was going to be feeling pretty stupid at some point today when the unicorn finally appeared. Indeed, there it is. Hanging, plain as day. The one door that it seems I didn't look behind! How on earth did I miss that?

Picking up the kids, it turns out Istra won the pumpkin her class group designed and carved that afternoon, by being first to guess the number her teacher was thinking of. Emeth licked at his sucker all the way home, commenting frequently on how good it was. 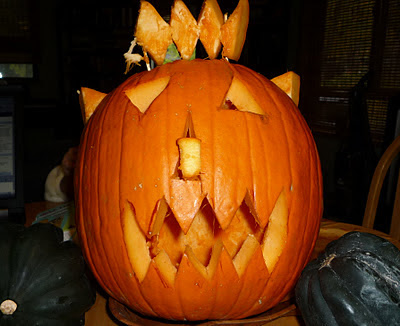