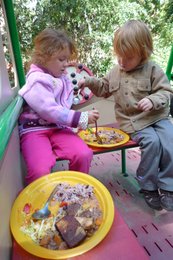 As usual, I don't know how we pack as much as we do into weekends. And we didn't even get to all the things that turned up in the agenda. And we started late.

For us the day started out with a bike ride to Friends Meeting House, where we hung around for another benefit-lunch in support of some Jamaican school teachers who are up here getting some training. In fact I believe they were at the conference/workshop thingy at U of T that Selena was at all day Saturday (Educating for Peace and Justice).

Anyhow, Istra really loved the Jamaican-style food we picnicked with. She went so far as to say these people cook better than mommy! I was sure to jump in, however, and assert that she shouldn't be so hasty, because mommy's stuff is okay sometimes! She did relent and said that these people and mommy really know how to cook good.

From there we hit a computer shop as I needed new gizmo. Turns out the place is closed on Sunday. 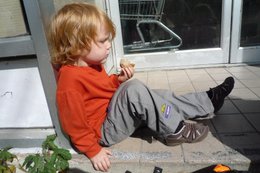 But that's okay, our next scheduled stop was right around the corner: Kensington Market. Selena has a friend who has been having a Vegan Bake Sale table there on the weekends. Selena's been wanting to get down there to check it out all summer. Finally she managed to bribe us with promises of sugary baked goodness that we let her bring us along.

It's been a whlie since we were down there on the weekend. Selena's friend told us that it was a pretty slow day for them. The crowd as a little sparse towards their end of the street... but to get to that end we had to navigate through thick crowds of folk all over the street, and no less than 3 or 4 different live bands playing (one of them being something like a 16 piece brass outfit playing swingy-style jazz), belly dancers in the middle of the street, and on and on. Kensington market is still pretty crazy on the weekend. Anyhow, we got through all that to our reward: hanging out on the steps in front of a vacant storefront, and munching on rainbow sprinkle covered cupcakes and listening to yet another band playing on the front lawn two doors down. 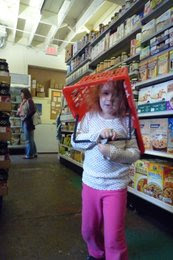 We were -- and this was to be the main activity of the day -- heading to the Word on the Street festival at Queen's Park. But after all this it was already around 4pm, and we were all already feeling pretty worn out from all our traipsing around; and Selena decided that what we really needed, and what she really wanted to do, was to get some groceries at Karma Co-op before it closed... so we headed up there.

Shopping trips to Karma always being mini-adventures in themselves. Admittedly not altogether pleasant ones with the kids! The co-op store is relatively small, and the kids tend to go nuts in there. They seem to like it a lot. Today Istra decided to wear a shopping basket on her face and run around the store; meanwhile Emeth decided his shopping basket would make a good home away from home and spent a lot of. And on and on. Whee.

Well, i got some pictures anyhow. Click the first pic to see more.